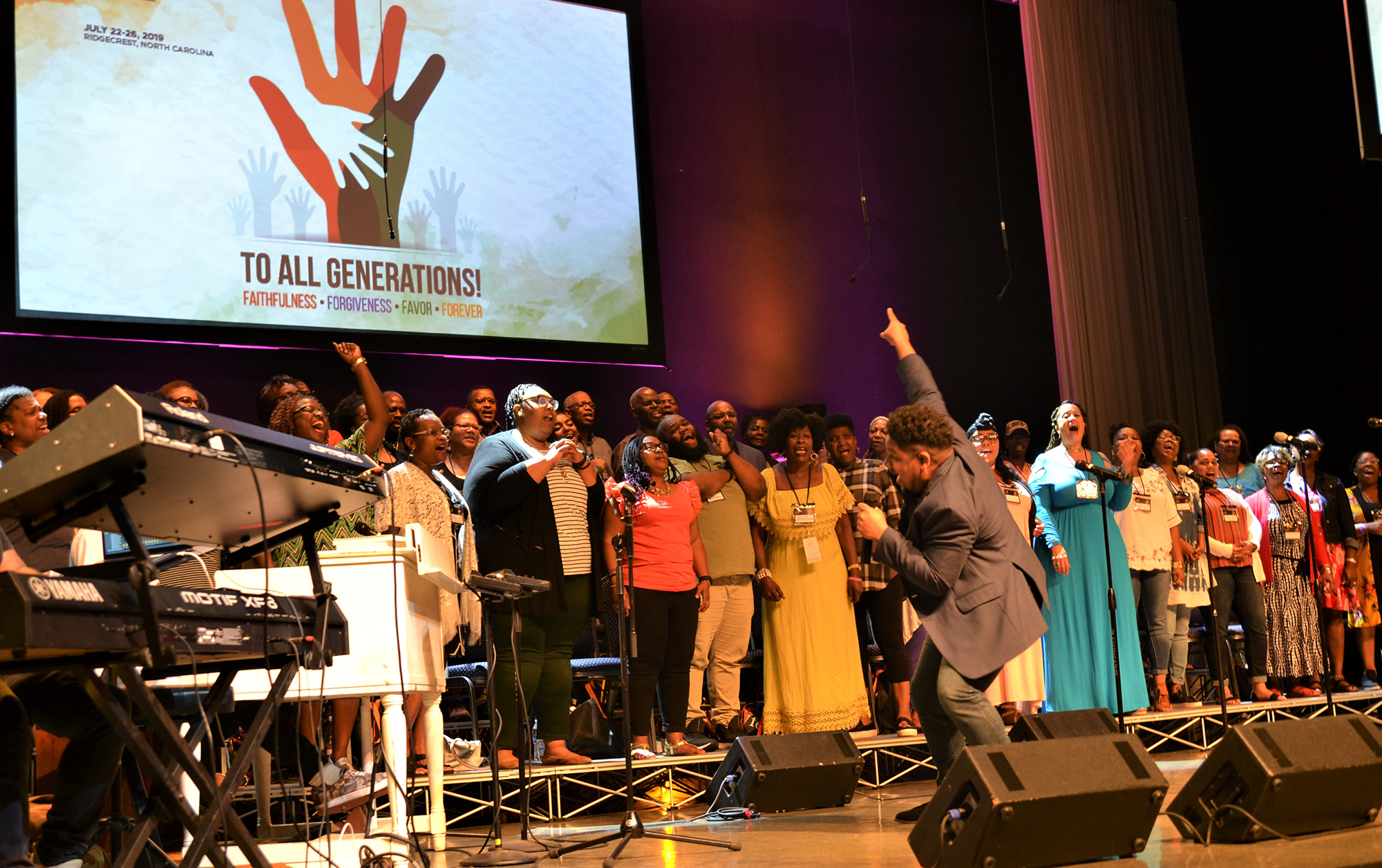 “Worship at the Black Church Family Leadership Conference is always a blessing,” he told Baptist Press. “It is encouraging to see so many different preachers rightly dividing the Word of God while faithfully engaging their culture with the Gospel.

“The Gospel speaks to every area of our lives and the preaching I hear at this conference reflects that truth,” said Robinson, lead pastor of Hillcrest Baptist Church in Country Club Hills, Ill.

Nightly worship included praise led by the Whosoever Will Choir, composed of volunteers recruited on the event’s opening night. The choir, which rehearsed daily, sang with frequently raised hands and at times danced. A handful of the 700 or so worshippers in Spilman Auditorium extemporaneously played tambourines. Worshipers frequently proclaimed hallelujah and amen, raising hands and singing songs of praise.

Robinson, a member of the Southern Baptist Convention Executive Committee, preached the event’s opening night sermon. In “An Unexpected Witness” based on Genesis 50:10-20, Robinson highlighted the forgiveness that followed the 2015 shooting that claimed the lives of nine Bible study attendees at historic Emanuel African Methodist Episcopal Church in Charleston, S.C.

“Forgiveness is a family value,” Robinson told worshipers. “If you’re part of the Kingdom of God, forgiveness is what we do.”

“The world couldn’t understand how these family members could forgive the man who killed their loved ones,” Robinson said. “Some said they were weak for forgiving him, but one family member responded it actually takes great courage to forgive, because forgiving means I trust God…. And while the gunman intended to use this evil act to start a race war, God used it as an unexpected witness.”

In the scriptural text, Joseph’s brothers did not expect forgiveness after having sold him into slavery.

“But through the years Joseph had come to trust God,” Robinson said. “And he had come to an understanding that it was God who put him in his position in the first place…. His brothers’ hatred was rooted in their jealousy, but Joseph’s life was rooted in God.”

To be an unexpected witness, Robinson encouraged worshipers to refuse to play God, to rest in God’s providence, and to remember that redemption and salvation are God’s purpose.

In a reception after the opening night worship, <b>NAAF</b> welcomed ministers and wives for fellowship, a buffet meal and an overview of NAAF’s ministry to about 4,000 black Southern Baptist pastors. NAAF partner World Vision sponsored the event.

Lisa Harper, a LifeWay author and speaker, addressed women at the Women’s Fellowship Dinner July 23. At a July 24 Missional Leadership Dinner, pastors, ministers, mission leaders and others heard an overview of Southern Baptist mission outreaches and the evangelistic “Who’s Your One?” initiative.

In addition to LifeWay, event sponsors are the SBC Executive Committee, the International Mission Board, the North American Mission Board, GuideStone Financial Resources, WMU and NAAF.

The 2020 black church conference is scheduled July 20-24 at Ridgecrest. Information is available at 800-588-7222, or ridgecrestconferencecenter.org.