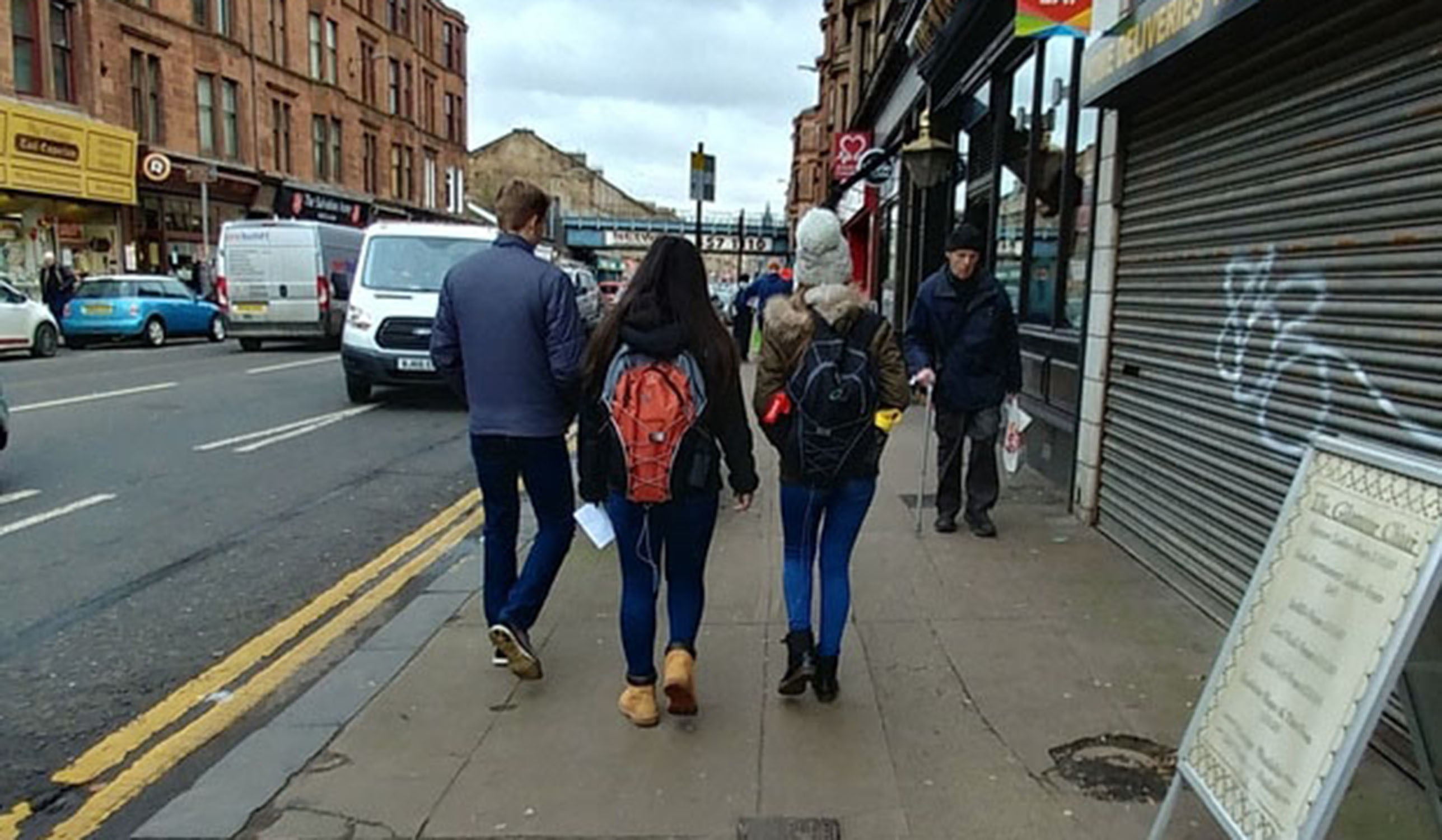 NASHVILLE (BP) — Prayerwalking continues to play a vital role in leading people to personal relationships with Jesus, according to ministry leaders and church planters who practice the spiritual discipline of “praying onsite with insight” as part of their ministries.

Mike Puckett, executive director of Baptist Campus Ministry of the High Country in North Carolina, said prayerwalking in his context has been a cornerstone practice — “a really great way to start work in a new community” as well as “massively important” to ongoing work.

“We are surrounded on our campus, in our community and in our culture with people who are far from God, and most of them aren’t really coming to look for Him,” Puckett, who serves primarily on the campus of Appalachian State University in Boone, told Baptist Press.

Following the model Jesus set with His disciples in Luke 10, BCM of the High Country goes out two by two and offers to care for people.

“We’ll say, ‘We’re just out on campus trying to care for people and wanted to know how we can pray for you,'” Puckett said. “It gives us not just the opportunity to pray for a student dorm or an apartment complex or a neighborhood or something like that because we’re near it. We’re praying for the people of it by going to the people who are in it.”

Prayerwalking — a practice that gained popularity in the mid-1970s — shows the campus that BCM students “love them enough to get a little uncomfortable and go talk to strangers who likely do not agree with us and likely do not follow Jesus,” Puckett said.

They’ve even had an atheist tell them, “I don’t believe in what you’re doing, but I’m really thankful that you did it,” and give them a hug, Puckett said.

“We’ve realized while prayerwalking is a great way to till the soil and see where God is at work and ask Him to continue working in power — it becomes an ongoing practice that’s just a part of who we are. It’s a rhythm that we will never give up, especially in a college culture where people are moving out and moving in constantly. There’s always new soil to till, and it pushes us outside our comfort zone,” Puckett said.

Ron Shepard, the North American Mission Board’s Send City coordinator in Seattle, told BP prayerwalking undergirds their strategy and is something church planters and other ministry partners there are asked to do with a goal of initiating Gospel conversations.

As they pray on elevators, streets, buses, trains and standing in line throughout Seattle, Shepard and others have seen great results, he said, as prayerfulness “sets the stage for greater attention, greater listening” from those who hear Gospel presentations.

“Prayerfulness is very strategic in both starting and continuing our relationships,” Shepard said of the people he seeks to reach in Seattle.

Allyson Clark, co-director of the Next Generation Ministries team at the Baptist Convention of New England, said she helps students incorporate prayerwalking into their lives in such natural ways that they may not even realize they’re doing it.

“If God shows you something, there’s this immediate response of, ‘God, bless this situation,’ or an ambulance goes by and you’re just like, ‘God, be with the people who are caring for the person in that ambulance,’ or ‘Be with the person who obviously has some kind of crisis.’

“So the Spirit leads them, they do it, and it’s not even an activity as much as it’s a response,” Clark told BP.

She has led students on mission to nearly every continent, Clark said, and as she teaches them to prayerwalk, she helps them think through aspects of prayer they may not have considered. For instance, “As we were walking through a country that was 99.6 percent Muslim, we talked about the privilege of praying for someone for the first time.

“How many of us grew up with a whole faith community praying for us? But on this day, as we walked to our ferry, we were praying for those we passed who no one has ever prayed for,” Clark said. “This challenge is true in our daily lives to pray for those we don’t know yet but pass on a daily basis.”

Clark has led groups of students to prayerwalk up and down streets in London and door-to-door in the Dominican Republic, where they were able to ask people about specific needs. As groups of different students return to the same places year after year, they are able to report answered prayer such as, “Last year the group prayed, and now a church is in this place,” Clark said.

William Brown, a supporting church coordinator at NAMB, told Baptist Press prayerwalking “still has a significant role to play in missions mobilization and missions engagement, but it can shift and change with the times.”

“By that I mean that in some ways you don’t have to go like you did before to see a place and feel the brokenness of a place because you can get on Google and you can read and see and watch videos and those kinds of things,” Brown said.

Virtual prayerwalking can have a broader impact, for example, as NAMB helps church planters get a feel for a city by developing a series of questions that send them on a sort of online scavenger hunt, Brown said. “Out of the information that they gather, they can pray more specific prayers for those places.”

But “good old-fashioned boots on the ground still has a significant role as well in that there’s just no substitute for getting there and seeing a place and feeling the brokenness of a place to really be burdened for the lostness in that city,” Brown said.

As the world continues to change, believers will have to be more creative about getting into places that are not receptive to a Gospel witness, Brown said. While it’s natural to think of that in closed countries, in North America prayerwalking can be an avenue “to get into a community so that you’re available and ready to have Gospel conversations with people.”

Brown added, “Those who go on prayerwalks should be ready to share their faith as they go so that when you are in a conversation with someone and learning about their struggles and the struggles of that particular community you’re equipped and ready to have a Gospel conversation. It gets you into a community in a pretty nonthreatening kind of way.”

“Ask those who have been there — the ones who trudged along village paths in countries seemingly closed to the Gospel, where hundreds now proclaim Jesus as Lord,” Witcher wrote in comments to BP. “Talk to the team that walked the grounds of a girls’ school in a nation where few females have the privilege of a formal education, or to those who walked through the marketplace, jostled by the scurrying shoppers, asking God to open eyes, to slow people down long enough to see His goodness and hear His words of truth.”

Prayerwalking never was intended to be a passive activity, some clever way to do missions without ever engaging others, Witcher said.

She referred to an Oswald Chambers quote: “Prayer does not equip us for greater works — prayer is the greater work.”

Randy Sprinkle, a former IMB missionary and prayer strategist, wrote a six-week Bible study tool titled “Follow Me: Becoming a Lifestyle Prayerwalker” (New Hope Publishers), which helps believers experience prayer as a way of following Jesus as He is at work around them.

“Walking among, and talking with, people had been our method of engaging a lost world with the saving Gospel,” Sprinkle wrote. Then, in gaining an awareness of prayerwalking, “We were still walking and talking, but now it was with God on behalf of this same lost world. And that made all the difference.

“Our preparatory prayer, both personal and then corporately as a team, had been and remained essential. But this walking prayer brought a new level of encounter with God as our hearts were moved in more intense and directly personal intercession for the people we saw and encountered,” Sprinkle wrote.