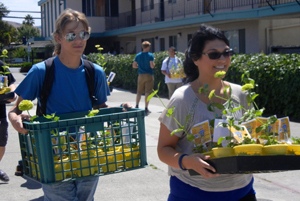 PowerPlant draws students from across US

BAY AREA – For 150 students and leaders, the week of July 19-24 was pivotal, as they converged on the Bay Area to work alongside local church planters for P2 Missions (also known as PowerPlant).

Central Baptist Church in Round Rock, TX brought 50 people. They flew into Oakland and rented four large vans and a truck. They worked with three church planters, including Curtis Flemming, at Bay Community Church in West Oakland, where they connected and engaged with children and young teens who live in a difficult area.

Del Cerro Baptist Church in La Mesa brought a team of 18 to work with a Hispanic church start in Union City, Iglesia Bautista La Roca. Planter Homero and Ana Hernandez did a great job of getting ready, including getting 300 pots, filling them with dirt and a plant so the team could distribute them to neighbors. Each plant included a small card inviting them to Vacation Bible School that week and to their worship service. This was the first time many of the residents had heard of the new church.

They also salvaged leftover Vacation Bible School material and decorations from other churches to make their VBS look great. The first day brought flexibility as there was a major fire very close to the church and the police blocked traffic. The teams quickly made signs for a makeshift drop-off location, then walked people in from half a block away.

Good Community Church in Torrance returned for their third year of P2 Missions, and worked with Interface SF and planter James Soy, doing street evangelism and community service. Youth Pastor Peter Jung said the first day or two were challenging because as Koreans, they are often very task-oriented and this project stretched them to look for opportunities. One such was to go into a bubble tea (a Taiwanese tea) shop with the purpose of engaging the workers. After a great conversation, the students realized they could do the same thing back home. They decided to stop buying their bubble tea at the church caf‚ and look for one in their neighborhood and build relationships.

Airway Heights Baptist Church in Airway Heights, WA worked with planter Mustafa Muhyee at B.A.S.I.C. in Oakland, organizing and leading an evangelistic block party at a local park. They led football practice, cheerleading, a food giveaway and concerts in the park. One resident said “something was happening in the neighborhood” and that she had never seen the neighbors come together in that way.

North Hills also was the host facility – all the mission teams stayed there, where they also had training and most of their meals.

P2 Missions is coordinated by LifeWay Christian Resources of the Southern Baptist Convention. Howard Burkhart, California Southern Baptist Convention church planting catalyst, is the local coordinator and worked with church planters to get them ready to make effective use of the mission teams. For most of the planters, P2 Missions is the only time they get a mission team. The Bay Area is also on the P2 Missions schedule for next summer, July 4-10.

P2 Missions takes care of lodging, meals, programming and a ministry site. It is great for new groups and youth pastors as well as experienced groups. Participants make an enormous difference for church plants, which don’t have the people to do the projects that are vital and necessary to help them grow. And the students experience church planting in a real way.