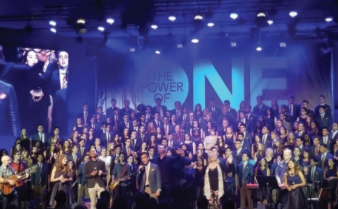 “Power of One” displayed during CSBC annual meeting

RIVERSIDE (BP) — Messengers to the 2017 California Southern Baptist Convention annual meeting welcomed a new executive director, re-elected the Convention president and approved a 2018 budget during their 77th session that highlighted “The Power of One.”

Held at Magnolia Church in Riverside Oct. 24-25, the Tuesday evening convention session featured Bill Agee, elected as CSBC executive director in May, who presented his vision for the Convention, along with details about a restructure.

The CSBC Executive Board approved the revision during their September meeting, which creates four “initiative teams” — small church, evangelism and missions, church planting, and church revitalization — from what previously were the healthy church, missions advancement and church starting groups. One of Agee’s goals for the Convention is to place a renewed emphasis on evangelism and missions.

In his convention sermon Agee challenged messengers and guests to “do something new” to reach the state for Christ.

“We’ve got one opportunity to seize the day,” Agee declared. “Let’s embrace the unknown with open arms. Let’s endure whatever hardship may lay ahead and move the Kingdom forward.”

Jim Wilson provided theme interpretations for The Power of One during two sessions. He is a member of Eagle Ridge Church in Menifee and director of the doctor of ministry program at Gateway Seminary in Ontario.\

“California Southern Baptists … we’re at our best when we are unified around the gospel message and its proclamation,” Wilson exhorted the audience. “And when the world sees our unity, they will believe.”

During his President’s Sermon Vines told messengers and guests they are “`blessed to be a blessing’ — that’s good news to hurting people,” encouraging them to share Christ.

“Let’s change our state, which will change our world for Jesus Christ,” Vines declared.

All were elected by acclamation.

Budget
Messengers approved without discussion a 2018 budget of $14.89 million, which includes a Cooperative Program objective of $6.7 million, down from $6.8 million for 2017. It is based on actual year-to-date 2017 CP receipts and projections for 2018.

If the $6.7 million is realized, national and international Southern Baptist Convention causes will receive $2,345,000, or 35 percent, a half-percent increase over the 2017 allocation.

The California portion of CP receipts for mission causes is $3,953,000, or 59 percent, a half-percent decrease from the 2017 allocation. The Baptist Foundation of California and California Baptist University will continue to receive 1 and 5 percent, respectively.

Other business
Don Fugate, pastor of Foxworthy Baptist Church in San Jose and chairman of the CSBC Executive Board, read a motion from the Board recommending a reduction of their membership from 40 to 28. It will be voted on at the 2018 annual meeting.

Bo Coburn, worship leader for the host church, led a team from Magnolia and other Inland Empire churches in worship for the annual meeting.

A total of 361 messengers registered, along with 172 guests.

Next year’s meeting will be held Oct. 23-24 at Clovis Hills Community Church in Clovis.