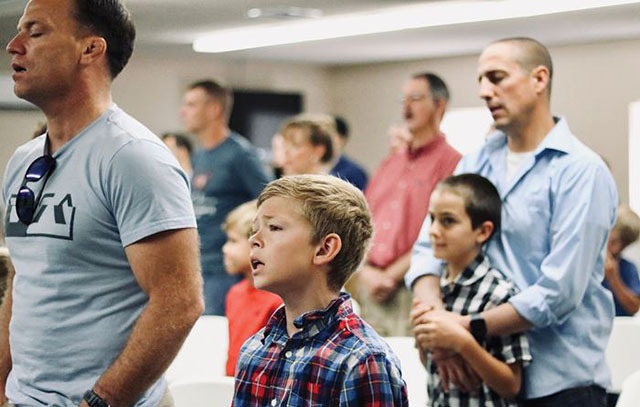 29 PALMS — Jacob and Joi Rogers had already tried for four months to find a church home during their first stint in 29 Palms a year earlier. As a newly married couple, the Marine and his bride had to travel an hour away from home to find a good church fit.

So when they returned to 29 Palms in the spring of 2018, Joi already dreaded the search for a new church.

But that’s when new friends told the couple about Pillar Church in 29 Palms, a new Southern Baptist congregation specifically reaching out to Marines in the city. From their very first visit, the church seemed like the fit they had been looking for.

Although Jacob and Joi had both grown up in Christian homes and were believers before coming to Pillar, Joi has seen herself grow much deeper in her Christian walk during the past year. Since about 80 percent of Pillar’s attendance comes from the nearby Marine base, the church has a deep understanding of the unique challenges of military life.

“I’ve known my whole life that my faith was the most important thing to me,” said Joi, who now coordinates the church’s women’s ministry. “But that didn’t really translate to my everyday life. Through Pillar, through the examples around me, it has transformed our vision of the future — from how we look at the Marine Corps to how we look at finances and how we make decisions. Everything is now measured by what God has for us and nothing that the world says is important anymore.”

Roy Garza started Pillar Church in January 2018 in part to engage the area’s Marine Corps community. A former Marine himself, Garza had been stationed at the base years earlier so he and his wife, Cassandra, already had a unique understanding of the needs of Marine Corps families within the community.

“Particularly in 29 Palms, the tempo here is so high,” Garza said. “The husbands are always gone. The mom is trying to wear both hats, mom and dad. We’ve had to learn how to adapt to that and had to learn to minister to families where the dad is gone a lot of the time. We’ve had to find unique ways to minister to the father while he’s here and keep in touch with him while he is deployed.”

Garza noted church attendance has grown from six families to an average of 120 people each week with little to no marketing. He believes part of the reason the church has grown so quickly is because of the deep need in the community for a church that understands the unique needs of military families.

Small groups have been one of the church’s most effective outreach tools. Garza noted many new families come to the church through one of its small groups. There are several on base and others in town.

Pillar Church in Dumfries, VA commissioned the Garzas and two other couples to start Pillar 29 Palms as part of its Praetorian Project, a family of Southern Baptist congregations planting churches in military communities around the world. Clint Clifton, who started Pillar Church Dumfries in 2004, began the Praetorian Project after noting the unique potential — and pitfalls — of starting a church near Quantico, nicknamed the “Crossroads of the Marine Corps” because so many Marines spend some time there.

“Every year thousands of service members and their families cycle in and out of Quantico, making it both an excellent and awful place to plant a church,” Clifton wrote in a free e-book entitled, “Praetorian Project: Multiplying the Gospel Through Military Church Planting.”

Today, the network has eight churches, including 29 Palms and one in Okinawa City, Japan.

Military families, he added, have unique needs, including the fact that they are constantly deploying. Church plants provide these families with opportunities to network and connect with other military families and engage in a community atmosphere.

“It’s exciting to see the spiritual hunger among these young families,” said Carver, who served as the US Army’s chief of chaplains before his 2011 retirement. “They’re hungry for community. They’re hungry for a relationship. But most importantly, they’re hungry for truth, spiritual truth, and hearing the Gospel of Jesus Christ. Many times, they’re hearing it for the first time.

“These military church plants are shedding the light of the gospel within the context of some of these communities where there’s not a lot of religious activity or even churches in some remote locations, especially Southern Baptist churches.”

Carver said NAMB encourages these church planters to reach out to chaplains on base and partner with them as they minister to military families.

(This article first appeared in SBC LIFE, newsjournal of the Southern Baptist Convention.)