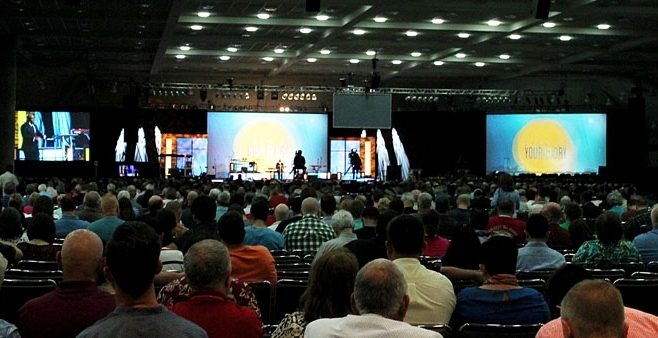 The June 8-9 sessions in the Baltimore Convention Center preceded the June 10-11 annual meeting of the Southern Baptist Convention.

Rick Warren, pastor of Saddleback Church in Lake Forest, spoke about suffering, his message coming a little more than a year after his son Matthew committed suicide.

Warren kept his remarks brief, saying that, though he had prepared a full message on suffering, a word from the Holy Spirit guided him in another direction during his flight to Baltimore.

“The Holy Spirit whispered to me, ‘The people and the pastors need your prayers more than they need your sermon,'” Warren said.

After speaking for about 15 minutes about suffering, Warren called for those who were in the midst of suffering to walk to the front, where he knelt and prayed for them. Warren asked God to use their suffering to make them more like Christ and better enable them to minister and witness. Many in the crowd went forward.

Before the prayer, Warren said suffering, though entwined with sorrow and grief, can be and is used by God to accomplish His purposes. Warren explained he has learned from his own experience that, after asking “why questions” – questions that even Jesus asked – Christians must realize that God allows suffering to direct, inspect, correct, protect and perfect them.

“If you study church history, you will discover that behind every publicly successful ministry, there is private pain,” Warren said, adding later that in his worst year, Saddleback had its best year.

Warren offered five ways believers can use suffering when it comes: draw closer to God, draw closer to people, become more like Jesus, help others and witness to the world.

“God’s number one purpose in your life is to make you more like Christ,” Warren said. “If God’s going to make you like Jesus, He’s going to take you through the things that Jesus went through.”

David Platt, pastor of The Church at Brook Hills in Birmingham, AL, outlined 25 names, titles, attributes and activities of God found in Psalm 68 in order for pastors to “get a glimpse of God’s glory” and be compelled to display it in their churches and the world.

“Once you get a taste of the glory of God, you find yourself possessed by an insatiable passion for more and more and more,” Platt asserted.

As Platt described the awe-invoking character and activity of God found in the psalm, he noted God is active, cares for the weak, holds sovereignty over nature and nations, carries burdens, saves His people and deserves praise throughout the Earth.

Beholding the glory of God, Platt said, should drive Christians to stand in awe of Him and give their lives to His mission.

“Give glory to this God,” Platt encouraged. “Do not be casual with this God. Do not be complacent with this God. … Stand in awe of this God! He has not saved us from our sins and filled us with His power so that we can sit back on the sidelines of what He is doing in the world. …

“May it be said of you and me, of the churches we lead, and this convention that we were men and women who loved the glory of God more than we loved our own lives.”

In an emotional conclusion to the Pastors’ Conference, Francis Chan, author, speaker and former pastor of Cornerstone Community Church in Simi Valley, passionately called believers to “not be content to hear Moses” instead of going up the moun-taintop themselves.

His plea referenced Exodus 32-33, which describes Moses’ meeting with God on Mt. Sinai.

Chan urged the audience to develop a hunger to really know and love God, rather than “taking ‘selfies’ with Moses and writing about it.”

“Movements start when founders really know God, but movements die when the followers only know the founder,” Chan said.

Referencing Mark 14 – which tells of Jesus, in the depths of His sorrow, falling to the ground and asking that the cup pass from Him – Chan pressed believers to keep their eyes on the cross where Christ gave His all.

“Are you resting in the cross right now? Is your joy and salvation coming from Jesus?” Chan asked.

He concluded by saying he felt many of the conference participants were bound by rituals and patterns instead of “dying in their hearts to really know God.” In the midst of their devotion to those rituals, “people groups and people are going to Hell” without Christ, Chan declared.