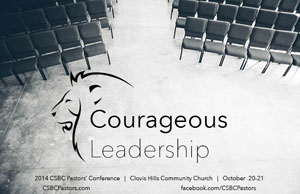 CLOVIS – Pastors were encouraged toward “Courageous Leadership” through trials and transitions, during the annual Pastors’ Conference, held this year at Clovis Hills Community Church in Clovis Oct. 20-21.

The conference was one of several gatherings prior to the California Southern Baptist Convention annual meeting at Clovis Hills.

Speaking from times of brokenness in their lives, MacDonald and Martinez encouraged the pastors to remain faithful to the Lord as He remains faithful to them even in the darkest hours.

“The church of Jesus Christ … needs a reputation of being able to forgive people, redeem people, engage and welcome the shunned and despised.

Gordon MacDonald, chancellor of Denver Seminary and a former pastor, related five times he had “reached bottom” in his life, the first as a novice youth pastor. After difficulties arose, his first temptation was to quit, but he persevered.

There will be difficult days, MacDonald told the pastors, but, “In ministry if you can’t persevere you’re not going to make it in a long lifetime of serving Jesus.”

His second “bottom” came after a conflict with a church member. With anger “and even hatred” raging through him, MacDonald said he realized he needed to forgive the man. He said he felt “50 pounds lighter” afterward.

Forgiveness is “one of the single most important functions in the heart” of anyone in ministry, MacDonald asserted.

The third event came when realized he was so busy with ministry he could no longer function successfully.

He had a “bellwether moment,” when he heard God say, “If you will not take the time to commune with Me on a regular basis, if you will not search your soul, if you will not allow the Holy Spirit to speak into you before you go out to all those people out there, then this is going to be a short-term ministry.”

MacDonald said the fourth “bottom” came when he was being seriously considered as head of a large national organization. He wondered, “How did I miss the pointing finger of the Lord?” when the job wasn’t offered to him.

“Where God does the absolute opposite of everything we thought He was about to do, it’s almost as if He says, ‘I want to jolt your heart.'”

The last and worst “bottom” came when MacDonald said he broke his marriage vows, and realized he might never be in ministry again. He and his wife withdrew from public life, and, “In those days I discovered the richness of mercy – of being forgiven – of what it means to repent.

“The church of Jesus Christ … needs a reputation of being able to forgive people, redeem people, engage and welcome people that the rest of the Christian world wants to shun and despise.

“Those five experiences … are the places I’ve learned the most important aspects of what it means to live according to the gospel,” Mac-Donald said.

When releasing is needed

Speaking about “Release and Engage,” Chris Martinez, founding pastor of Generation Church in North Oceanside, said he also experienced a dark time soon after he started the church, when his infant son became ill and eventually died.

He noted that engaging in starting the church “came easy – releasing didn’t.” While his son was in the hospital, Martinez had to release the responsibilities of the church to engage with his family. The congregation continued for close to a year with guest preachers, and even grew, Martinez said.

“God assured me He had me where He wanted me!” Martinez declared.

Release means surrendering “our will to His, our desires to His desires, our power to His power” in order to “engage in the mission that God has called us to,” Martinez said.

“If I had my choice I would prefer to tell a miracle healing story,” he said about his son, “but today I share with you a miracle broken story. … I ask God to take away the brokenness and He reminds me, ‘My Grace is sufficient for you, for my power is made perfect in weakness.'”

God’s presence is the reason we are to be strong and courageous, and not to be afraid.

Realizing “there are many ways courage shows up” in pastors, from personal difficulty to church issues, Marshall Shelley, editor of Leadership Journal and an editorial vice president of Christianity Today, spoke “from a journalist’s perspective.”

“Pastors are courageous,” he declared. “What does courage look like in the pastoral world that I’ve been covering as a journalist?”

Shelley referred to Joshua as he led the Children of Israel into the Promised Land. Getting there was wonderful, “but there was still a lot of work to be done.” God encouraged the people to be “strong and courageous,” Shelley said, adding, “God’s presence is not a vehicle for the success of our agenda. God’s presence is the reason we are to be strong and courageous, and not to be afraid.

“There are times in ministry when it takes courage not to withdraw,” Shelley noted. “Jesus instructs us … to be strong, do not be afraid, be courageous, love God and love your neighbor.”

Have “eyes that see God is with us,” Shelley encouraged the pastors. “There, in the presence of Jesus, is our courage.”

Hal Seed, lead pastor of New Song Community Church in North Oceanside, noted that Joshua, who was 80 years old when he began leading the Israelites, had been in battle but had never been “the” leader.

Early in Seed’s ministry he said he had no desire to “step out of the shadows or rock any boats,” but then he went to a church planting seminar that changed his life.

“I learned that church starting is the most effective single means on Earth of reaching people. … When I walked out of that room, it was like flames were coming out of my back and I didn’t even know it! That was a seminal direction-changer for me.”

Seed, whose church joined the Southern Baptist Convention just last year, said to the pastors, “Now, I’m new and I don’t really know you guys,” but I hope we walk out of here “with flames coming out of our backs, determined to think like courageous leaders, and to do some things for Jesus before we died that were bold and strong and outside the box and really changed the world.”

“Real leaders are willing to own responsibility for changing the world and willing to work hard to make those things happen.

He described three important issues: First, “You must be convinced that you are in the bridge-building business – that God has called your church to build bridges.

“Second, you have to be a student of bridges – you have to understand the various bridges that are out there.

And third, “You must start building.”

Thousands of congregations are sitting and dying, Evans lamented, encouraging the pastors to survey their church members once a year, asking: “In the last year have you invited someone to church? Have you shared Christ with someone? Have you led someone to Christ?

“Some people are just an invitation away from coming to your church and finding Christ,” Evans encouraged.

“Are you convinced that you’re in the bridge-building business?”

“Prayerfully consider beginning a discussion with our leaders about intentionally leading a transition to the glory of God,”

Steve Davidson, founding and teaching pastor at Clovis Hills, urged the audience to be courageous in transitioning leadership in their churches.

As he realized he was nearing retirement, Davidson said he decided to bring in a younger pastor as his successor, serving with him as a co-pastor for the first several months. He said it was “an act of faith” to call Shawn Beaty – who served as president of the Pastors’ Conference this year – but that the “experiment” has been successful so far.

Davidson noted that, while the process is not easy, church leaders must “determine the right time to begin the transition” and “choose the right succession pastor.”

Beginning the transition requires stepping out on faith. “Faith by its nature means you’re hearing God as best you can … you may be wrong … but you’re rolling the dice,” Davidson said.

He also emphasized “shared leadership,” noting it wouldn’t be fair to ask a new, young leader to sit on the sidelines. Give them enough rope to “swing in the trees or hang themselves,” Davidson joked.

He said that after several months he led the church to elect Beaty as senior pastor.

“When our people saw mutual submission – that I was going to freely submit my authority and give it to him, and he believed I would forever be the founding pastor – when they saw that – the spiritual power in the room was just palpable.

“Maybe we should prayerfully consider beginning a discussion with our leaders about intentionally leading a transition to the glory of God,” Davidson encouraged.

Don Conley, pastor of Encanto Southern Baptist Church in San Diego, was elected as president of next year’s Pastors’ Conference.