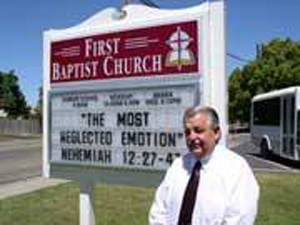 GRIDLEY – A small stroke while he was on his way home from the Southern Baptist Convention annual meeting in Houston last June hastened the end of Rick Cunningham’s two-stint pastorate at First Baptist Church in Gridley. His last Sunday in the pulpit was Jan. 26.

“It was hard to resign this time,” Cunningham said. “This obviously has been 30-plus years of my ministry life. I’ve been preaching since I was 21, began filling pulpits in (Sierra Butte Baptist Association) in my 20s.

“It’s been a great pastorate and a church that has shown a great deal of love,” Cunningham continued about First Baptist, Gridley.

It’s a church that – under Cunningham’s leadership – has excelled in its commitment to Southern Baptist mission causes. Despite having fewer than 100 in Sunday morning worship, First Baptist for the last 10 years – and probably twice that long – has been among the 100 top givers in California Southern Baptist Convention to missions through the Cooperative Program. Its giving to international, North American, and California seasonal mission offerings also shines.

“The bottom line is that this small country church has given three quarters of a million dollars to missions, and that doesn’t include my first three years here,” Cunningham said. “Thirty cents out of every dollar goes somewhere else since I have been here. … It’s not me; this congregation is missions minded and evangelistic.”

Cunningham, son of the pastor of First Baptist Church in Central Valley, who married Becky, daughter of the chairman of deacons, was 26 when he first was called as pastor in 1975 to First, Gridley, which then was a congregation of about 40 aging members. He resigned in 1979 to further his education at California Baptist College (now University) and Golden Gate Baptist Theological Seminary, and was called a second time by the church in 1987.

“When they asked me to come back I was a little bit taken back by it at first, but really felt that was what God wanted us to do,” Cunningham said. “I think what sets our church apart is not me or my wife; it’s the people God has given us to shepherd.

In addition to giving 15 percent of its income to missions through the Cooperative Program, First Baptist gives 5 percent to Sierra Butte Association, and spreads the rest of a total of 30 percent in mission giving to a variety of ministries.

For the last 12 years the church has sponsored a morning Vacation Bible School and afternoon soccer camp the first week of August for the children of migrant workers who live in Yuba City – plus providing food, clothing and the gospel for them and their families – through CSBC’s “Feeding Those Who Feed Us.”

“In this 12 years we’ve probably seen more than 1,000 people come to know Christ,” Cunningham said. “I was always taught the importance of church growth, but another area important to me is Kingdom growth.”

First Baptist has led a community-wide Awana program for 18 years that involves about 80 youngsters. For 15 years it has sponsored an Easter Sunday sunrise service that draws as many as 150.

The key to any “success” the church has had, the pastor said, in addition to God’s favor, can be found in the length of time he has stayed in Gridley, and in his commitment to becoming part of the community.

“The only challenge you really face, when you’re the pastor in a small community, is the value of getting known,” Cunningham said. “It’s important, and I did my best. … I doubt if there are many families in this community that I have not either done a funeral for their family or a friend of their family.”

He coached junior varsity football and served numerous times on the interview boards for the local school board and police departments. Cunningham’s service also extended to California Southern Baptist Convention. He served on the Executive Board, was a representative from California to the SBC nominating committee, and provided influential support for migrant ministries statewide. At least five people from First Baptist have gone out as missionaries with the SBC’s International Mission Board and North American Mission Board.

Cunningham only gave up pastoring because he’s been blind in one eye since 1980 and the stroke weakened his other eye to the point that he can no longer read and study the Bible the way he likes to, he said. He also can no longer drive or satisfactorily perform other pastoral duties, Cunningham added, so after prayer he decided it was time to pass the baton.

“Sermons have not been a problem as Becky has served as his eyes with open Bibles in front of her as her husband recited his thoughts and instructed her where to look as she typed his sermons for each weekly service,” according to an article in the Gridley Herald announcing his retirement.

“Of course, being a pastor means seeing people at their best and worst times of life,” the article continued. “He … has been called on to give comfort during many tragedies. His kind and gentle way would make any trying time bearable.”