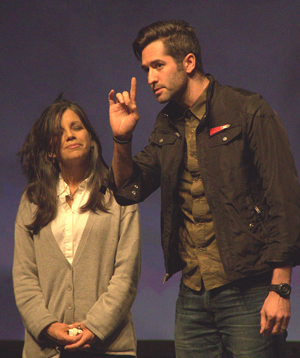 CLOVIS — California Southern Baptists gathered for “One Night One Reason” at Clovis Hills Community Church in Clovis Feb. 24, one of four sites throughout the state that week. Other venues included Southwinds Church in Tracy the previous night, and First Chinese Baptist Church in Walnut and Grace Point Church in San Diego the following nights.

Randy McWhorter, leader of the California Southern Baptist Convention healthy church group that sponsored the event, introduced the evening by taking the audience on a “video tour” of the three major California cities — San Francisco, Los Angeles and San Diego.

He explained that One Night One Reason would not include music, but solely feature “Evangelistic Ideas Worth Sharing,” theme of the evenings. Presenters included Keith Wieser, lead pastor of Resonate Church in Pullman, WA; Drew Worsham, an illusionist/mentalist and campus minister in Pullman; Paul Borden, executive minister of Growing Healthy Churches based in San Ramon; and Eric Bryant who serves on the teaching team of Gateway Church in Austin, TX. Hal Seed, pastor of New Song Community Church in Oceanside, and Joel Southerland, executive director of evangelism strategy for the North American Mission Board, were featured at the Los Angeles and San Diego events.

Keith Wieser
Keith Wieser began the evening’s “talks” by affirming, “I believe in the power of the gospel, and I believe that needs to be unleashed.”

He noted traditional evangelism methods often result in people being “convinced” of the gospel but not necessarily “converted” to Christ.

“God’s people living their lives towards each other with God’s love,” he explained.

“Showing and telling” is a phrase his congregation has adopted — showing people pictures of the gospel before they’re told the gospel. There are “connectors” and “cultivators” among members of the church, which “all works together, and the souls of our people come alive.”

New believers often acknowledge, “I’m drawn to the Jesus I saw in you,” Wieser said.

Paul Borden
While Paul Borden began with lamentable statistics about the state of the church in America, he echoed Wieser that the church needs to be unleashed to “reach a lost and dying world,” adding he is encouraged by a renewed emphasis on church planting.

“Here’s the reality — on any given weekend in the US, less than 20 percent of the population is in any kind of church,” Borden said, noting that “not only is the church declining, but evangelism is not a priority among American Christians.”

“What we say we believe we demonstrate by our actions that we don’t believe,” he declared. “The problem is not what we say — the problem is that our ministries are not aligned with our purpose, and that is why we don’t do evangelism.”

One reason the church is failing today, he continued, is “because we as Christians believe the church is for us, when it’s not. The church is here for us to make more disciples and be all about the process of reproduction. The church of Jesus Christ is one generation away from extinction.”

Drew Worsham
Drew Worsham changed the tone of the gathering as he used magic tricks and illusion to encourage the audience to use their gifts and talents to help further God’s Kingdom.

He said he became interested in magic and illusion as a 17-year-old and, “in starting to do these things, people would stop and watch and pay attention, and I thought, What better time to share with people what had captured my heart — Jesus?!’”

God has gifted “every single one of you,” Worsham told the audience, with gifts and talents that are unique, and whatever ability He has given, use that “to draw attention to Him.”

“Whatever it is you do, would you use it to make much of Jesus?” Worsham asked.

He performed several “mind-reading” illusions, drawing in members of the audience to assist.

Eric Bryant
Continuing the upbeat mood, Eric Bryant began by saying, “I think we live in a very exciting time,” outlining four principles for making a difference in the world.

At the end of the evening McWhorter introduced MY316 materials, a new faith-sharing method based on John 3:16, also reminding the audience about God’s Plan for Sharing (GPS), an every-other-year evangelistic emphasis in the Southern Baptist Convention, to be featured next in 2016.

For more information about MY316, GPS or other evangelism strategies, contact the CSBC healthy church group at rmcwhorter@csbc.com, dhowell@csbc.com or 559-229-9533, ext. 245, or visit www.csbc.com/evangelism.