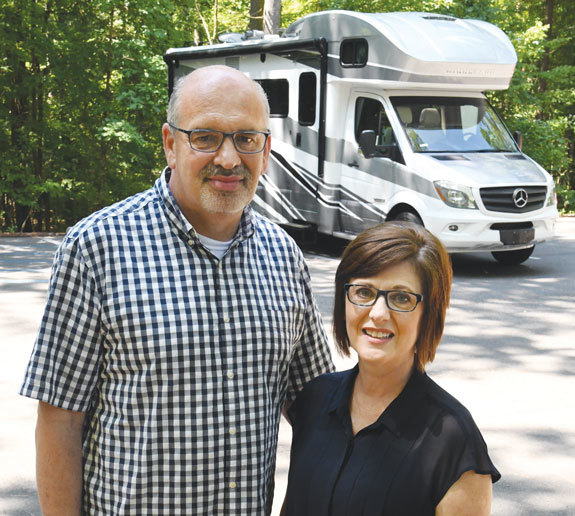 On the road for missions: Hendersons share WMU story

ARKADELPHIA, Ark. (BP) — The rumble of the on-board generator lent a muffled, but noticeable, undertone as Trennis and Pam Henderson gave a tour of their new home.

Outfitted with all the modern comforts and conveniences expected in a 21st century home — if not in somewhat smaller proportions — the Hendersons’ new home is a 24-foot-long Winnebago RV.

Since Aug. 1, the couple has been taking their RV across the country, working together to share the stories of Woman’s Missionary Union’s (WMU) various ministries with a new generation of Southern Baptists.

Trennis now serves as WMU’s national correspondent, and Pam will conduct administrative and production services, including planning their itineraries and taking photographs. A former editor of the Arkansas Baptist News, Trennis served as vice president for communications at Ouachita Baptist University in Arkadelphia from 2008 until July of 2018.

Sensing God calling them to enter a new stage of ministry, and recognizing their passion for travel, the couple reached out to WMU with their thoughts on how they could help the organization communicate their existing ministries in a new way.

Trennis’ mother served as an associational WMU director when he was a child growing up in southeast Missouri. He said that when he was in talks with WMU’s leadership about working for them, he shared the special place that the organization holds in his heart.

“One of the things that I told the WMU executive board was that, obviously, I don’t look like the typical WMU member, however, … when I was 5 years old, and my older siblings were at school, my mom would give me the privilege of going to associational WMU meetings with her,” Trennis said. “So, I’ve considered myself an honorary WMU member since I was 5 years old.”

Sandy Wisdom-Martin, WMU national executive director, said partnering with the Hendersons to travel around the country will be “an effective way to capture stories that will inspire and inform Southern Baptists about the mission and ministries of WMU.”

Julie Walters, WMU corporate communications manager, noted WMU is “excited to partner with Trennis and Pam to share the impactful stories of ways God is at work and changing lives through WMU missions opportunities and ministries.”

For Pam, it was an experience she and Trennis had a few months ago that confirmed God’s call for them to hit the road.

“We had a stranger tell us her story of her journey from Buddhism to Christianity,” she said. “As she told it, she was tearing up and I was tearing up. It was such a beautiful moment, with a complete stranger. We ended up praying together before we left.

“Trennis looked at me as we were driving home and said, ‘you know that’s not normal,'” Pam said with a smile. “I feel that we have had the curtains drawn back and have been given a window into what our life could look like.”

The couple said they are hoping that those types of conversations become their “new normal,” as they explore the faith journeys of others during their upcoming travels.

From house to RV

The Hendersons said that as they transition from living in a house to an RV full-time, they have received inspiration from their two adult daughters, who both live in New York City, in small, big-city apartments with their respective families.

While they have not become as minimalist as their daughters, the Hendersons said that letting go of material things in recent months has helped them to focus on the spiritual aspect of their new work.

“Our culture tends to collect stuff. For us the focus, at this point, is on the mission. We really see the RV as a vessel, a tool, to be able to do the work that we sense God calling us to,” Trennis said. “And that is, traveling the nation, doing interviews, telling mission stories.”

Trennis said he and Pam, who have spent the greater part of the past 10 years working with college students, are especially hopeful that their work will resonate with younger generations, including Millennials and Generation Z.

Pam said she hopes the content they produce will be helpful to these younger generations, providing them resources that resonate with their ministry and that can be used to reach their friends, communities and church families with the relevancy of WMU’s various missions and ministries.

“We’re not writing and producing these stories just so people will say, ‘Oh, that’s interesting,’ only to turn the page or swipe the screen,” Trennis said. “We want them to say, ‘Is this a ministry that I might could be involved in?’ Or, ‘Does this help me brainstorm for something that I might be able to do in my area?’ Or, ‘Are these folks that we could add to our prayer list?'”

The challenge is not making WMU more relevant, as many of their existing ministries are already very relevant, Trennis noted; the challenge will be in finding new and unique avenues to communicate what the organization is already doing through human-interest stories.

“We see it (the national correspondent position) as very practical, hands-on and an opportunity to make a positive difference,” he said.

As their life on the road begins, the Hendersons ask for prayer.

— that God would lead them to individuals, churches and ministries to highlight,

— that God would provide a buyer for their home in Arkadelphia,

— and that God would provide additional financial supporters to provide them the resources and money necessary to cover travel expenses during their three-year journey.