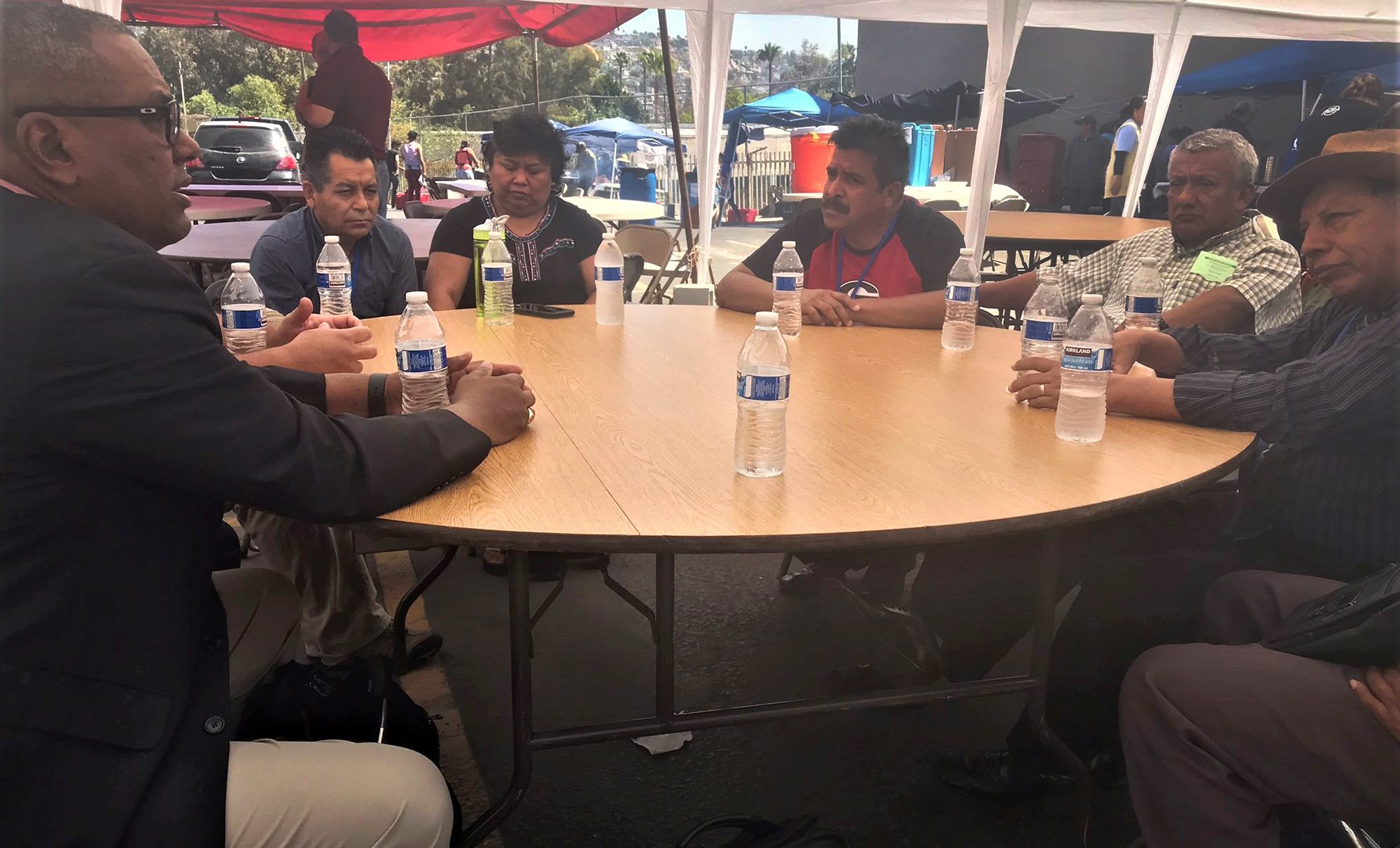 On the border: ‘urgent need to show Christ’s love’

TIJUANA, Mexico (BP) — The two adult sisters risked their lives in a months-long journey from Cameroon in Central Africa to Tijuana, Mexico. Southern Baptist pastor Marshal Ausberry was surprised to see them at the Southern U.S. border seeking asylum in America.

“It’s just not people from Central America and South America that are coming,” Ausberry, first vice president of the Southern Baptist Convention, told Baptist Press following his trip last week to the border. “There are people from Africa and Haiti that have migrated to Mexico in attempts to come through the border to the United States.”

Ausberry met the immigrants at a Baptist church in Mexico as he was on a fact-finding mission on border ministry with Todd Unzicker, an associate pastor at The Summit Church in Raleigh-Durham, N.C. The Christian sisters fled persecution in Cameroon.

“That was just one story, and there are thousands of those kinds of stories,” said Ausberry, senior pastor of Antioch Baptist Church in Fairfax Station, Va. “I kind of see it as a modern-day diaspora, that God is shifting the population around for His purposes. When people are willing to endure such great hardships to come to the United States from Mexico for their personal safety, it just moves your heart.

“We don’t get into the politics of it, but as believers in Christ Jesus, we’re burdened to do that basic level of care,” Ausberry told BP. “We still need to show them that human dignity of food, clothing and shelter, that care … as they go through the political process of getting asylum and access to the United States and Mexico.”

“As Pastor J.D. says, most of us are not called or competent to make policy decisions on the border, but we are commanded by Jesus to love our neighbors and those who are hurting,” Unzicker told BP. “And this, what is a crisis, I think could actually be an absolute win for the Kingdom.

“Nobody could doubt that God is moving the nations all around the globe right now, in ways that history has not seen before,” Unzicker said. “We were able to go and share the Gospel with people who literally had nothing.”

The sisters from Cameroon were staying and serving at a church while awaiting an immigration hearing in the U.S., Ausberry said.

“They really have the joy of Christ in them,” he said, and prefer their current situation to Cameroon. “Their love for Christ, their hopefulness, is just tremendous. It touched our hearts, and we’re thankful for the church opening their doors to give them a place to stay, a place to serve while they’re waiting to go to the hearing to continue their path to seeking asylum.”

Ausberry and Unzicker visited five sites where aid is being administered. Baptist churches there do much with few resources, the two said. At one church, about 30 immigrants were housed on cots stacked to the ceiling. Churches were feeding, clothing and ministering to those who had fled home with nothing.

“One pastor had such a burden,” Unzicker said, that he asked his leadership for permission to house immigrants in the church’s Sunday School classrooms. “His leadership team said OK you can make room for five people, so he went out and brought back 30. And so they made bunks that just went all the way up to the ceiling.

“It’s happening all along (the border) from Brownsville (Texas) to Tijuana,” Unzicker said. “We want to catalyze that, and see all Southern Baptist entities and churches working together for one cause.”

Ausberry noted there is “an urgent need here to show the love of Christ, and it’s in real terms of food, shelter, clothing, a bath, a bed, just basic needs you and I take for granted.

“I use the phrase, it’s almost like we’re making bricks without straw. They do what they can,” he said.

Ausberry and Unzicker described the situation as an optimum opportunity tangibly to show the love of Christ.

“The nations are coming to our front doorstep,” Unzicker said. “We want to certainly welcome them with arms that are full of blankets and food, and most importantly the love of Jesus.”