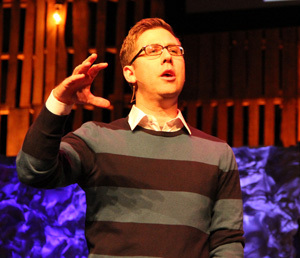 On Target goes on the road throughout California

FRESNO – A national researcher and a noted author both believe the Church – the people of God – must be outside the four walls of the church building if gains are to be made in winning people to Christ.

David Kinnaman, president of the Barna Group, and Reggie McNeal, author and speaker, told participants at four On Target Evangelism Conference “rallies” throughout the state that the greatest cultural impact and evangelistic gains will be realized when Christians are “authentic” outside the church walls and begin ministering to people physically, socially and spiritually.

This year’s On Target conference took a “road trip,” meeting in four locations throughout California beginning Feb. 18, with the theme, “One Night-One Reason.”

Starting south in Santee, the California Southern Baptist Convention-sponsored event traveled to Alhambra, Clovis and Tracy. According to Randy McWhorter, leader of the CSBC healthy church group, One Night-One Reason was “designed to heighten awareness that there are 33 million lost people in our state who don’t know Jesus Christ as Savior.”

“California has more lost people than any other U.S. state,” he added, “and has as many lost people as the entire population of Canada.

“It is time for California Southern Baptists to focus on what really matters – 33 million lost people,” McWhorter declared.

On Target traditionally is held in Southern California over two days, but this year McWhorter said the goal was to “include more churches, more pastors and staff, and more lay leaders” who could attend a “one-night rally rather than a two-day conference.”

Reggie McNeal – churches change from program driven to missional
Reggie McNeal, author of several books including his latest, “Get Off Your Donkey” – referring to the Good Samaritan who got off his donkey to minister when no one else would – spoke during a dinner gathering prior to each conference about transitioning a church to become missional rather than program driven.

“One of the key things about going missional is, you can run a program church off anyone who’ll pay the ticket, but you can’t have a missional congregation absent missional people.”

McNeal told church leaders they need to “unleash the church” to make a difference in their communities.

“Church” should be more like a verb – more of a way to operate. “How is your ‘churching’ going?” McNeal explained. “Not, ‘How is your church?’

“‘How’s your churching going at work, in your neighborhood?'”

He encouraged churches to pay attention to what they celebrate, noting, “What you make a big deal out of is what people think is normal.”

Cautioning leaders, McNeal said transitioning to a missional church will not happen overnight.

“It takes four or five years to pull off a culture change,” he explained, while encouraging participants to “face your fears” and begin the process.

David Kinnaman – encourages Christians to cultivate God-honoring conversations with non-believers.
To make the transition successfully, David Kinnaman, president of the Barna Group, told On Target participants he thinks it’s “harder than ever to be a Christian,” but believes there are opportunities available to reach and change the culture.

“Should you be informed? Absolutely.” But when wariness of the culture turns to fear, “you’ve lost faith in Christ.”

There are “so many reasons to be pessimistic today, but God has not given us a spirit of fear,” Kinnaman asserted.

He also said Christians and churches need to develop “better metrics for success,” noting 69 percent of Americans “say they’ve made a commitment to Jesus.”

Kinnaman encouraged believers to “partner across differences,” such as ethnicities and generations.

Noting visits he’s made to churches in other countries, Kinnaman said, “Our little corner of evangelism and being the church is not the only thing.”

In order to reach the current culture, he encouraged believers to “cultivate God-honoring conversations” with non-believers.

“Do you think people want to have a good job?” he asked rhetorically, “understand God’s calling in their life?

“I think that is absolutely true,” he declared, encouraging Christians to engage those in their lives who are not yet believers in Christ.

“If you’re going to get in position to be able to actually have a chance for the 33 million people who are not Jesus-followers in this state,” McNeal echoed, “for those folks to get a taste of salt, a glimpse of life, we’re going to have do something that’s as old as Jesus.

God’s people are ready – they just need someone to call them to action, McNeal asserted.

“Get in the Kingdom stuff!” he encouraged, not just things of the world. To those who might say, “But my church can’t do it,” McNeal insisted, “You’re not off the hook.

“You don’t gotta wait on nobody to do nothin’,” he quipped. “You start it.

“If your congregation has a snowball’s chance to intrigue (non-believers), it’ll be because you choose to get off your donkey.

Rick Muchow of Mission Viejo and a team of musicians led worship at all four One Night-One Reason rallies, which were hosted by Pathways Community Church in Santee, Mandarin Baptist of Los Angeles in Alhambra, Clovis Hills Community in Clovis and Southwinds in Tracy.

Next year’s On Target Evangelism Conference, back to its traditional two-day schedule, will be at the Torrance Marriott South Bay Feb. 17-18.