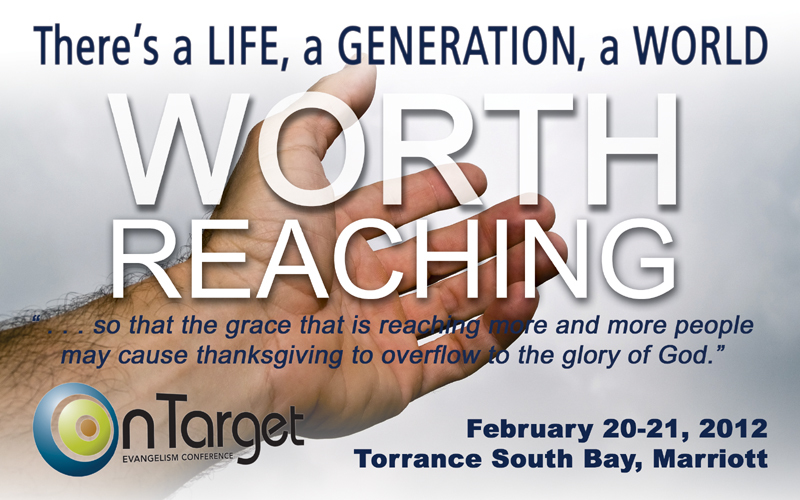 On Target emphasizes all are “Worth Reaching”

TORRANCE – All ethnic, age and other cultural groups are “Worth Reaching,” according to the 2012 On Target Evangelism Conference.

Held at the Marriott South Bay Feb. 20-21, On Target featured speakers ranging from authors, a British evangelist and an Evangelical Covenant Church leader to a California Southern Baptist pastor.

Mark Mittleberg, best-selling author and speaker on evangelism issues, told participants that when presenting the gospel, Christians should explain that man’s “moral debt must be paid.” He noted some might ask, “Why does a debt have to be paid at all? I thought God was love?” and held up a vase as a visual aid.

“If you break my vase I could forgive and forget. But you’re forgetting one thing – what am I left with? A broken vase. I’m left holding the damage – I have to go invest in another vase.

“If I forgive you, I have to somehow cover the bill,” Mittleberg explained. “Either I have to pay or someone else must pay.”

He said a second part of presenting the gospel is that “God paid the price Himself,” a concept often confusing to non-believers.

Using the aid of a whip, Mittleberg described a “whipping boy” of centuries ago. When the king’s son committed a crime, rather than punish him, another young man was brought in to take the beating for the prince.

Some might question what logic or justice there is in God “taking out” our sin on His own Son, Mittleberg said, but “they’re missing the point of who Jesus is. He is God!”

“This is the God we’ve sinned against. It’s not God taking it out on His Son – it’s the Father and the Son,” Mittleberg declared, noting Christ willingly took our punishment, not as a whipping boy.

“Jesus was making the payment, lovingly, in our place.”

Using another visual aid of a gift box, Mittleberg said Christians also need to explain that “God offers us His forgiveness as a gift.”

In order for something to be considered a gift, it must be received, Mittleberg added: “You can’t pay for a gift. As soon as you pay for it, it’s no longer a gift.

“The message we need to get across is ‘put away your wallet, let go of your efforts. It’s the precious Son of God, but it’s offered to you freely.’

“We’ve got to present the message,” Mittleberg asserted, “we’ve got to make it clear. This is the bull’s eye when we talk about being On Target.”

In order to “do” evangelism well, Dan Kimball suggested Christians need to “listen to what people say.”

The pastor of Vintage Faith Church in Santa Cruz noted that “the way we view things from the outside is very important – make it easier for new people.”

Churches don’t exist for themselves, Kimball reminded the audience, and how they communicate “is so important. Christians need to show unconditional love, but the church can become a stumbling block – not Jesus, but the church.”

When sharing the gospel, rather than saying, “You should,” say, “Here is the Jesus I know,” Kimball offered.

“We can’t forget about how we can come across,” he said. “This is not compromising anything about the gospel . I’m talking about how we do these things and in what context and how we explain them.

“Perhaps what it is, is that culture has shifted things to where our old ‘fishing’ methods aren’t necessarily the same as are needed today, or we’re fishing in the wrong place.”

Kimball noted Christians have often “lost the sense that we’re in mission territory and we’ve just been doing church.” He confessed that at one point he “lost being a missionary” and had to make some personal changes.

“The longer we’re Christians, the less likely it is that we have significant relationships with people who are not Christians,” he asserted.

Once there is openness to the gospel, getting people into and staying in church are key, according to Nelson Searcy, author and pastor of The Journey Church in New York City.

One strategy he uses is The Big Day.

“This has been the Number 1 strategy God has used at Journey . how to double your church in a day. What if you could have twice as many on Easter Sunday as you did last Sunday?” And retain them, Searcy added, and do it by reaching lost people.

Noting The Big Day really started in the New Testament – “the first church was birthed through biggest Big Day, Pentecost” – Searcy explained that “a Big Day is an all-out push toward a single Sunday for the purpose of reaching more people for Jesus Christ.”

He said the first step is prayer: “Decide what God wants you to do” then mobilize the church to pray, and pray for non-Christians who might be reached.

Personal evangelism also is essential and includes: tools – invitation cards, door-hangers; training – prayer-walk the neighborhood; and timeliness – when the effort should begin.

Promotion such as billboards, servant evangelism and door-to-door efforts also are an important part of The Big Day.

“Promotion allows you to reach out to those in your community who don’t go to your church,” Searcy said. “If your church only does ‘go and tell’ evangelism or you only do ‘come and see’ evangelism, you’re only getting half of the fruit that God wants you to have.

“A Big Day is come and see and go and tell.”

The fourth step is “preservation – preparing for the fruit that’s going to come through your Big Day.”

“I have noticed that there is a correlation between the church God blesses and the church that is prepared for God’s blessing,” Searcy asserted.

He encouraged church leaders to bring in more chairs, print more bulletins, provide new-believer Bibles and “clean out the baptistry” in preparation for what God will do.

Finally, Searcy told pastors none of the process would work “if it doesn’t first work in you.”

“People don’t do what they should do, they do what they see you doing,” he declared. “Pray for your church to grow … make a list of lost people who live in your neighborhood. if nobody else will do evangelism in your church, let it be done by you.”

Travis Ryan and his band from Saddleback Church in San Clemente led worship for On Target.

Randy McWhorter, leader of the California Southern Baptist Convention healthy church group that sponsors On Target, told the group that in 2013 the event will go “on the road” to four California cities for one-night events. Themed “One Night, One Reason,” the host cities will be San Diego, Los Angeles, Fresno and San Jose, Feb. 18-21.