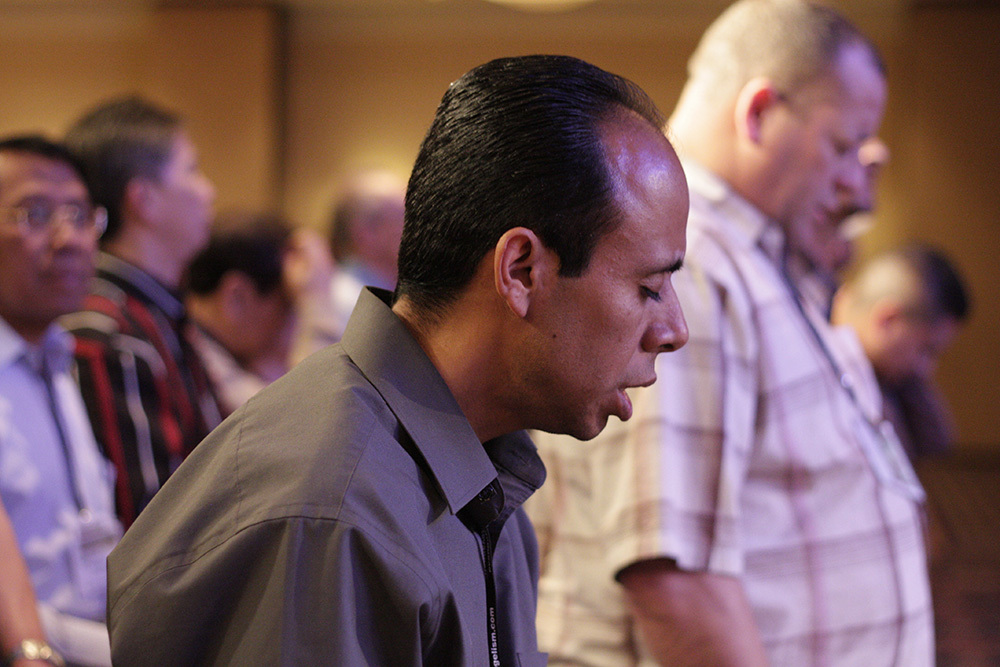 Stephen Macchia, president of Leadership Transformation, Inc., challenged
participants to “reconsider their priorities” if they really want a
life of transformation.

He said the most “significant and important lens” in ministry is
to that of the soul, “the most neglected part of the person.”

Using the parable of the sower from Luke 8 in which the farmer sows seed on
different types of soil, Macchia said it could be used as a metaphor to display
God’s love being sown in the lives of His people. He asked, “What is the
condition of your soil on which His Word is falling?”

Macchia noted the parable is about “the secret that we miss” which
he described as “receptivity,” and about “the generosity of God
lavishing His Word and giving of His very self” to those who will receive
it.

Macchia said ministry challenges are great and growing. “We are running
from one ‘to do,’ one ‘to have’ and one ‘to want’ right after the other. I’m
here to encourage you to hop off the treadmill and give your soul some rest and
receptivity so God can speak marvelously, lavishly and lovingly in your heart
of hearts and in the deepest places of your soul.”

Using an acrostic of “S-O-U-L” Macchia said leaders can feed their
souls by:

S – finding a spacious place to be alone and quiet with God,
O – being open, attentive and aware of God lavishing seed upon us,
U – through an unhurried posture of receptivity, and
L – through a lifestyle of transformation.

Two pastors also encouraged On Target participants to move outside the
church in order to transform their ministries.

Rob Zinn, pastor of Immanuel Baptist Church in Highland, said to be
transformational means to do things better than before and sometimes
differently than they’ve been done.

“We live in a ‘y’all come’ generation where if you come to church,
we’ll tell you about Jesus.

“There is no ‘y’all come’ in the Bible; it’s ‘y’all go’ and as you do,
make disciples, teach them and baptize them.”

“I’m upset,” he exclaimed, “that we have all the technology,
all the Bibles we could ever ask for, all these resources at our hands and
we’re doing less than we ever have. We’ve raised a church with a consumer
mentality. They come to church for a show and then leave and put it back in
your laps (leaders) to care for through the week.”

Zinn said he’s made a point of being involved in community activities during
his 35 years as a pastor. “If we are going to win the lost, we’ve got to
get out there where the lost people are,” he said.

Zinn noted his experience is, “People don’t turn down Jesus; they never
get to hear about Him. People turn down people who represent Jesus because of
the lifestyle we live.”

Highland “was” the community through disaster relief when 300 of
700 people in the area worked to clear 40 tons of mud after rains and mudslides
in late December.

“We want to be part of Highland,” Zinn said. “God opens doors
all the time if we will just go through them.”

He noted California is “our state” and “our
responsibility.”

With 87 percent of the California population “dying and going to Hell,
don’t ever say you don’t have any prospects. If you will change what you are
looking for, you’ll find out they are all around you. If you do that, God will
bless your socks off,” Zinn said.

Bob Roberts, pastor of Northwood Church in Dallas, also struggled with
transformation until he got a handle on what God wanted to teach him and had in
store for him.

Roberts’ congregation was declining in attendance when he said he asked an
important question: “God, why don’t you bless me?”

The answer he received was even more important, Roberts said: “Bob,
when is Jesus going to be enough?”

That was a life-changing moment for the Texas pastor.

He “quit preaching for conversion and went to transformation,” he
said, realizing the lives of many of the new believers in the church weren’t
changing.

The next thing Roberts prayed was, “God, instead of being the biggest
church in the area, help me church this area.” In the years since,
Northwood has started some 30 congregations in the vicinity of the church. He
noted he stopped “thinking like a pastor” and started “thinking
like a missionary.”

Instead of receiving and keeping, Christians are to pass along what they’ve
learned about a relationship with Christ, and pastors must let their people go,
Roberts said.

“There will never be enough vocational missionaries, pastors, denominations,
networks to fulfill the Great Commission. There are more than enough followers
of Jesus. If we’ll but loose them and let them go and release them, the Great
Commission will be fulfilled.

“We’ve made Christianity and Christian work about the church. And it’s
not – it’s about the city,” Roberts said. “It’s not about the
preacher and the church, but the disciple and the city. If I focus on the
preacher, then I limit it. But if I celebrate that He’s given us the whole Body
of Christ, and I believe He wants the Great Commission fulfilled, then it’s my
responsibility to loose (church members) and let them go, and to equip them
with the Word of God.

“All we have to do is share the gospel. People are hungry for it!”
Roberts declared.

Troy Lee, worship leader from Living Way Community Church, along with a band
from the Los Angeles congregation, led worship for On Target.

Participants also had an opportunity to preview the new film “Courageous,”
from the creators of “Fireproof” and “Facing the Giants.”