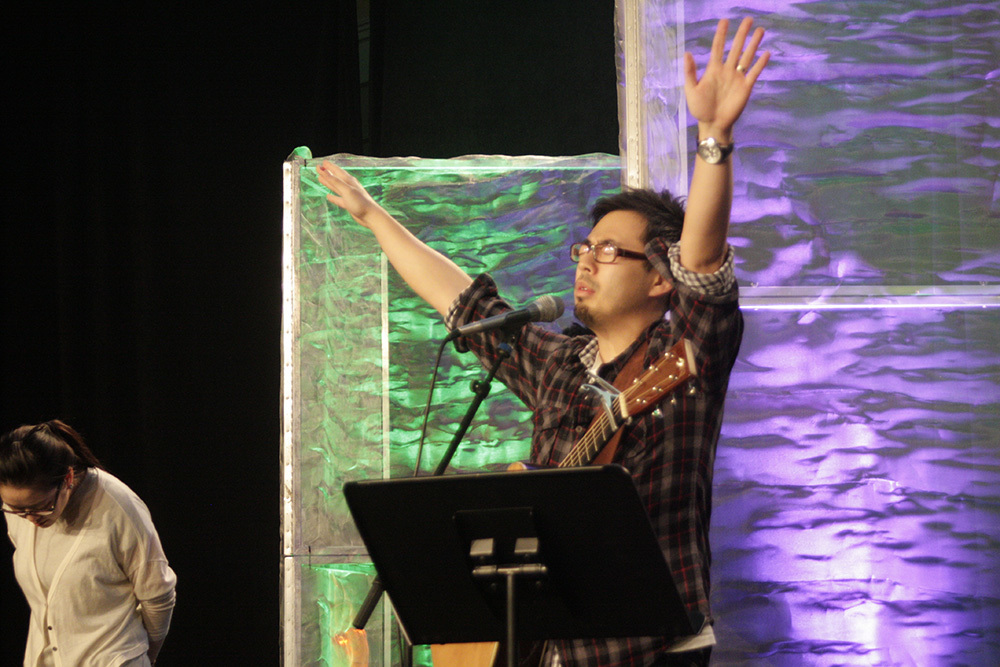 LONG BEACH – In spite of current economic struggles, unrest in the Middle-East and earthquakes and tsunamis in Asia, there is some good news in the world today: there is hope.

This according to two leading researchers, Ed Stetzer and Philip Nation of LifeWay Research in Nashville.

The pair addressed the On Target Evangelism Conference, held at the Torrance South Bay Marriott in Long Beach Feb. 21-22, though Stetzer’s presentation was compliments of the World Wide Web via a live Web-cast from Nashville.

Both emphasized the On Target theme, “Transformational,” basing much of their information on Stetzer’s book, “Transformational Church.” Co-written with LifeWay Christian Resources President Thom Rainer, the book is the result of research on 7,000 churches throughout the United States, including large and small congregations of various denominations.

“We found something we didn’t necessarily expect” from the research, Philip Nation told the audience. “We found hope.
“Churches just like yours growing, blessing, doing ministry.”

Using the image of a Global Positioning System (GPS), Nation said if the church is going to press forward in the areas of making disciples, spiritual transformation and helping people understand the gospel, there has to be a direction – “we’ve got to know where we’re going. We’ve got to decide that we can’t just wander aimlessly through ministry.”

Noting great ideas don’t just come from thin air, Nation explained that Christians have to be willing to do the “hard work” of getting to know people – not only “where you are but when you are.”

“God wants to point us toward His work in the world, where He is working among the lost, the hurting,” Nation asserted. That includes the “up-and-coming and the down-and-out . among the suburbanites who look like they have everything, who have big houses but empty souls,” and in the inner-city where the homeless live.

“We want to deliver the gospel into the lives of these people that are around us day by day by day. We’re responsible to understand what God is doing in our community and engage that mission … . I am here to bear witness and to testify that God is working in your church and desires to work more powerfully through the people of your church.”

An assertion echoed by Stetzer, who called churches to “engage all of God’s people in mission.”

“Move from passive spectator to active participant in the mission of God,” he encouraged, noting all Christians are sent on mission by Christ, not just church staff and leadership.

Elaborating on I Peter 4:10-11, Stetzer began by explaining that all Christians have gifts, received at their conversion, and that “we’re all called to ministry” and are gifted to serve others. The only question is where and among whom.

Second, God intends that all would use their gifts. Stetzer said many Christians act more like customers than co-laborers, noting customers come to church to have their needs met.

“The problem is,” he said, “customers always change.”

Co-laborers are “rowing the boat so they don’t have time to be rocking the boat,” Stetzer asserted, adding, “When you build a church on customers, those customers will turn on you. Co-laborers will go on the journey with you.

“Are we teaching people a culture of customer or co-laborer?” he asked.

Continuing through the passage, Stetzer noted that God empowers us to serve when He first calls us.

“We’re to use our gifts in and under the power of the Holy Spirit,” Stetzer said, adding that “any system that dis-empowers and de-motivates the people of God is unhelpful and perhaps sinful.”

“When we do for people what God calls them to do everyone gets hurt and the mission of God gets hindered.
“The gospel is not ‘you do,’ the gospel is ‘Jesus did,'” Stetzer declared.

He reiterated Nation’s statement that hope does exist, saying there is hope within the “transformational church.”

“It’s going to take some transition, some change in the way that you do ministry and the way that your co-laborers in the gospel, called by the Holy Spirit, do ministry,” Stetzer said, adding churches and their leaders have to change the way they think in order to transform.
Ultimately, Stetzer concluded, all ministry should be bringing God glory. And transformed churches give God glory through their service.
“When God’s people join in on mission, when they’re living on mission as the people of God, the end result is that individuals are changed by the power of the gospel … and the church itself is transformed.

“And that’s transformation worth having.”