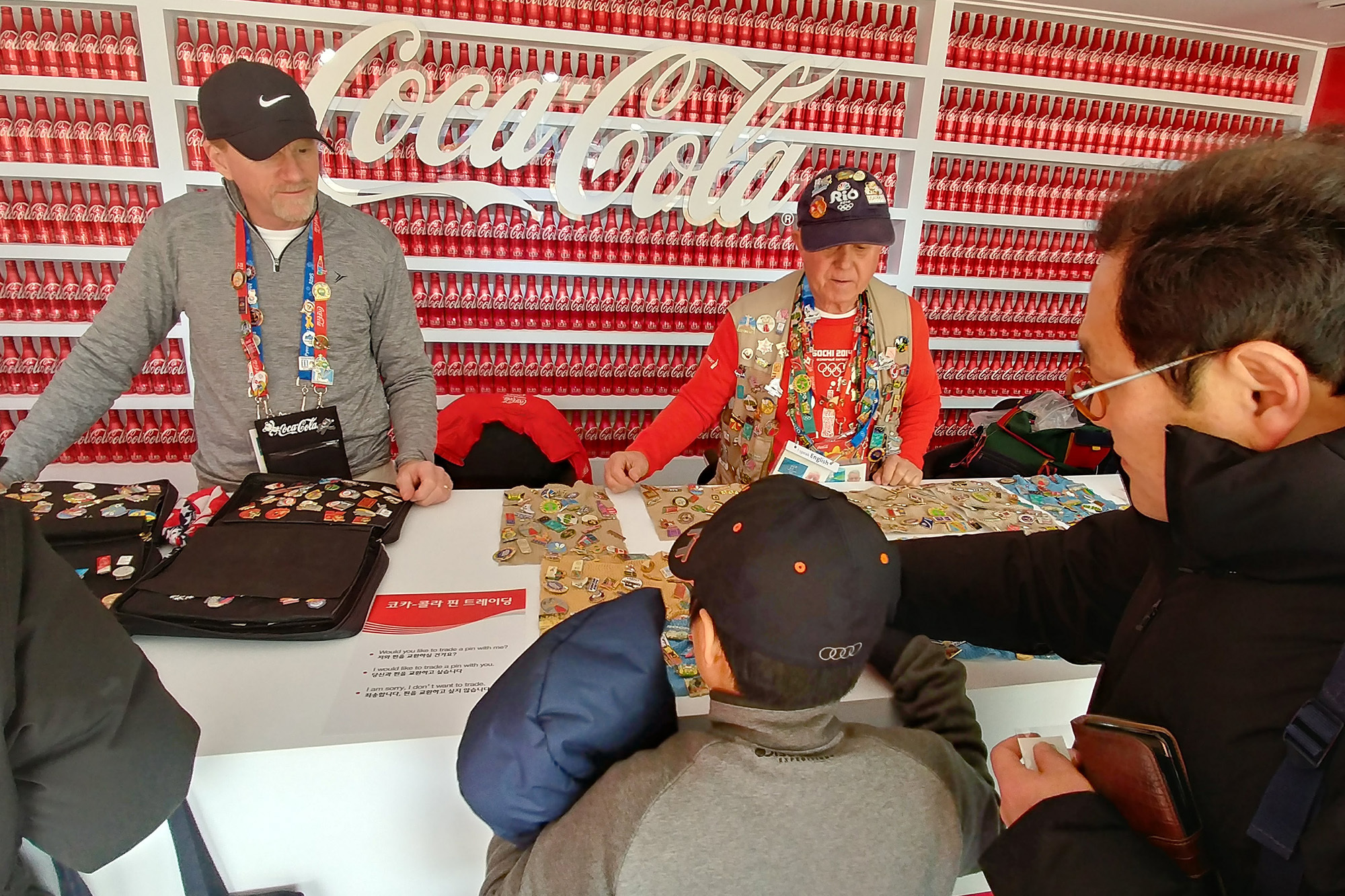 GANGNEUNG, South Korea (BP) — Visitors to the Coca-Cola Pin Trading Center at Olympic Park walk in and peer at the hundreds of small pins spread in front of the traders standing behind the counter.

The colors and designs are enough to catch anyone’s eye, encompassing pins from past Olympics in places like Sochi, Rio de Janeiro and Atlanta. And there are sport-specific pins depicting soccer, figure skating and gymnastics, along with corporate pins bearing the logos of Coca-Cola, McDonald’s and NBC.

Two Baptists are in the middle of the popular Olympics pastime, seeking to nurture subsequent conversations about Jesus.

“People from all around the world come through, and we trade pins, but we also build relationships,” said Marty Youngblood, a missionary in church and ministry relations with the Georgia Baptist Mission Board. “So as we see them later on in the park, we can go up and have other conversations. Because our primary role in coming over here as Christians is to share our faith in Jesus Christ.”

Youngblood and Sid Hopkins, a retired director of missions and pastor of Horizon Baptist Church in Suwanee, Ga., are pin ambassadors for Coca-Cola International. They’ll spend a couple of hours a day interacting with visitors at the trading center. One of the pins they offer for trade is a pin that Hopkins produced with colors that represent the Gospel story.

“You picked a special pin,” they’ll tell someone who asks for that pin. “That pin has a story behind it. I can’t tell it to you now, but I’ll be happy to share it with you sometime later.”

They don’t share the story behind the pin at the trading center, since they are there representing Coca-Cola. But the relationships they build allow them to approach people later in the Olympic park wearing the “story pin” and tell them what it means.

The black in the pin represents the sin that separates people from God. Red stands for the blood of Christ, green for eternal life, blue for heaven and gold for the value of a relationship with Jesus Christ that is more valuable than a gold medal.

“The spirit at the Olympics is like no other,” Hopkins said. “When we’re not working here, we’re out sharing with people and telling them about how to have a relationship with God through Jesus Christ.

“There’s an openness at the Olympics that you don’t find anywhere else,” he continued. “People will have discussions that they would not have anywhere else. So it’s a great opportunity.”

This is Youngblood’s 12th Olympics. Hopkins, likewise, is an Olympic veteran. Hopkins produced the pin they’re using this year, and Youngblood said a lot of thought goes into its design.

“Every Olympics kind of has its own personality, so we really pray and try to seek the Lord’s wisdom on what kind of pin may best appeal to the culture that we’re going into,” Youngblood said.

Youngblood said it’s easy to get caught up in controversies that inevitably surround the Olympics, such as political wrangling and disputes over scoring. But the pin trading experience — and the experience of engaging people with the Gospel –- gives him hope.

“You get back here and you start seeing people being people, in their culture,” Youngblood said. “They’re excited and proud for their country.”

For Hopkins, the Olympic experience of meeting people from all over the world and sharing the Gospel with them is always a welcome boost.

“It rejuvenates me,” he said. “It fires me up again to see what God does.”