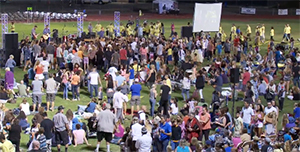 That was one of the many things Pastor Jason Blankenship of Ojai Valley Baptist Church in Ojai learned as he began planning for an outreach event in the fall.

He originally proposed to hold a community outreach at a park and expected about 200 to attend. His congregation of some 65 members was onboard.

The church typically holds four evangelistic events during the year, with this being the largest, requiring about $5,000 from the church budget.

“But God had bigger plans,” said Blankenship, who organized Stand Strong Ojai for the city of about 20,000. “And when He is in it, it’s going to work out.”

Stand Strong Ojai turned into a three-day community effort that brought nearly 4,000 residents to hear the gospel at a high school football field. Of those, some 550 made decisions to follow Christ and are now being discipled through various churches in the city.

“This was the biggest outreach event held in the Ojai Valley,” Blankenship said. “What started as a small outreach turned into a community-wide revival.”

It began with national speaker Nic Vijicic, founder of Life Without Limbs, who spoke at several local schools prior to Stand Strong. Vijicic used his platform to share about Jesus through his anti-bullying message to some 1,700 students.

The day of the outreach event, hundreds of volunteers gathered at Nordhoff High School, where Stand Strong was held, to clean up the parking area and spread $8,500 worth of mulch after cleaning other areas on the school grounds.

“The school district had to cancel its Saturday youth football league in order for us to be there, which opened a door for us to build a relationship with the principal,” said Blankenship, who had never worked with the Ojai School District before.

“It was amazing how God opened the doors for us.”

As a result the school district is now open to future partnerships with Ojai area churches.

Vijicic was featured speaker at Stand Strong, and the worship team from Lakeshore City Church in Corona led worship.

Blankenship believes there was a reason God chose to bless his area.

“The only way God moved in our city was because we had a loving, united ministerial association to begin with,” he explained. “We had nine churches working together.

“We started seeking God through prayer and began talking about different ways we could do a big event. God opened doors.”

In addition to local church support, a group of 1,000 prayer warriors committed to pray for the city and its youth for an entire year prior to Stand Strong.

Blankenship received a grant from SoCal Baptist Ministries, based in Norwalk, for a third of the funding, and local churches raised the rest, allowing Stand Strong to be fully funded.

“We never had to take a love offering, which could turn off some of the community,” Blankenship said. “Our goal was to bless the community.

“What started with just a handful of dedicated visionaries developed into more than 500 volunteers working to make this all happen.”

Blankenship has always believed God wanted to transform his city.

“No matter how big or small your congregation is, if you recognize God’s church is the vehicle to reach the community, you can be used by God.”

Churches across the Ojai Valley have continued to follow up on those who made decisions at Stand Strong, Blankenship said.

“We continue to see growth in our churches as a result of God moving,” he said.

(A video is available at www.MostHighOjai.info.)