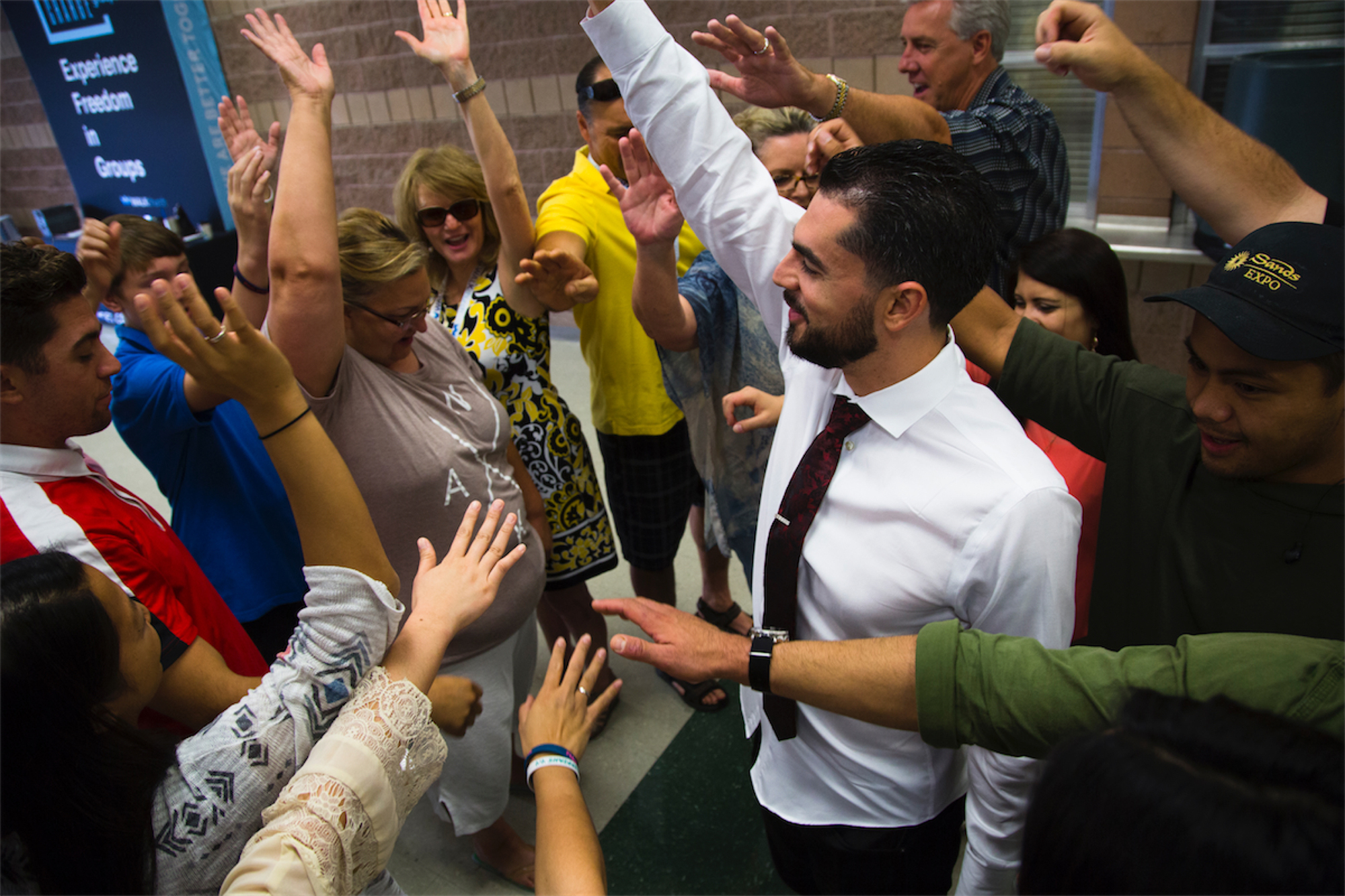 LAS VEGAS (BP) — Established in 1905 near the Union Pacific Railroad tracks, this city that was once a pass-through in the Mojave Desert has become one of the world’s most popular tourist destinations. Las Vegas hosts more than 42 million visitors each year. The draw includes novelty resorts and casinos with enough lasers and neon lights to make it visible from space, earning NASA’s distinction for Brightest Spot on Earth. But spiritually, the statistics tell a different story.

The city’s resident population is estimated to be around 630,000. Of that number, 92 percent reportedly do not know Jesus. Less than 37 percent of residents identify as religious; less than 5 percent align with the Protestant faith. The numbers underscore the reputation by which this place is known — “Sin City” and “The Entertainment Capital of the World” — but a new church plant is at work to bring transformation.

Leading the way are Las Vegas natives Heiden and Neena Ratner and the team at WALK Church. Their mission is to free people to walk in Jesus.

“We believe that Jesus has placed a primary calling on all of our lives and that is to make disciples of all nations,” Heiden Ratner said. He explained that the church engages people and Jesus sets them free. Planting a church, leading, sharing the Good News — it isn’t what he planned to do with his life, but now he can’t imagine doing anything else.

While growing up, Ratner’s dreams consisted mostly of playing Division 1 college basketball. As a sophomore, he was selected as the Gatorade Player of the Year for Nevada and consistently made all-state teams. He went on to play as a guard for James Madison University (JMU) in Harrisonburg, Va. Some teammates invited him to a Fellowship of Christian Athletes (FCA) meeting, and everything changed. “It was during that time that I realized I was missing something,” he said. “I thought, these people have something I don’t. I was able to hear the Gospel, get myself a Bible for the first time, ask questions, and it was there that God really began to draw me to Himself.”

Heiden became a believer in Christ, and while getting to know Jesus, he began to develop a passion for teaching, preaching and sharing the Gospel. The journey led him back to his hometown.

“The thing that was crazy was, all I knew back in Las Vegas were people who didn’t go to church or didn’t have a relationship with Jesus,” he said. “So when I came back home that summer, I just decided that, you know what, I know enough that I can maybe start a small group Bible study. I’d never been to church in Las Vegas in my life. And so I just decided to hit people up that I knew.”

Neena, whom he had known from high school, was among those he called to attend the study. “That’s where we connected again, and I saw something change in her life, as well as mine,” Ratner said. Their friendship grew, as did their respective relationships with the Lord.

When he returned to JMU for another semester, his love for basketball was still present, but not the same. He explained that most of his life the game and the fame had been an idol, “a little ‘g’ god,” but now as a follower of Christ, he realized that the game was not a god but a blessing from God. “I’m living out the dream that I always had of being on TV and playing at this high level,” he said. “While at JMU, God drew me to Himself, and He allowed me to then continue to use the game as a platform for His glory. And that took me to Israel where I was playing professionally. That was an amazing time out there — where I was able to do what I loved and do it for His glory.”

While in Israel, he and Neena were married. And the season was a sweet one. But seeds that had been planted years before were starting to take root. The Ratners eventually returned to Las Vegas, and Heiden continued leading Bible studies for friends and former teammates.

He said, “I really sensed God placing His finger on my heart, saying, ‘I’m calling you to something different. I’m calling you to something bigger, where basketball’s still going to be a part of it, but it’s going to look more like full-time ministry. It’s going to look more like a church plant in the city.’ I didn’t know what was going to come with that, but it was enough to put my ‘yes’ on the table and to trust God with the next step.”

Rooted in Colossians 2:6, the name WALK Church points to the foundational directive to walk in the ways of Christ. “Our church publicly launched on Sept. 20, 2015,” Ratner said, “out of the middle school I went to growing up.”

The number of believers who gather in the cafeteria on Sunday is growing, currently averaging around 180 to 200 each week. But WALK Church does more at Schofield Middle School than simply lease space. The church members have turned it into a community by hosting cookouts, tackling improvement projects, and starting a food pantry.

Ratner’s love for basketball plays a large part in his ministry. WALK Hoops draws a crowd of players, and some of them join Ratner in a competitive league at the Tarkanian Basketball Academy. People from the church regularly come and support the team. For WALK Church as a whole and for Ratner specifically, it’s a chance to connect with people outside of a church service.

WALK Church is all about getting out into the city. Their small groups are dubbed “Charge Groups,” and they meet in homes around Las Vegas throughout the week. People are charged to get involved in the areas about which they are passionate.

For Neena Ratner and many members, that includes working with children; for others it’s connecting with teens or hotel workers, and the list goes on and on. Teenager and varsity basketball player Ana found the way to life in Christ through WALK Church’s involvement with FCA. She had experienced a knee injury and was struggling with depression and the responsibility of taking care of her mother and brother. When the church community surrounded her, it pointed her toward the love of Jesus, and now she is helping others find purpose and life through the Gospel.

One of the dreams for WALK Church is to have a building that serves as a facility to meet and worship and also provide a gym for people to connect and exercise. It would be a place, Ratner said, “where people can experience freedom on and off the court.

“We think that’d be an awesome opportunity to really engage in an effective way in our city and would allow us to use our domains and passions for the glory of God,” he noted, “We trust that God’s going to provide for us as we take those steps of walking in Him.”

Every move the Ratners and WALK Church make is about expanding the Gospel into the “Sin City” of Las Vegas. They want to plant more churches in the city, meet more needs and give lost, hopeless people a place to find support. They’re learning how to raise up leaders and develop strong teams. In the midst of mesmerizing sights and sounds and the influx of millions of tourists, this church is on a mission to make Jesus known.

Watch a video about the Ratners work in Las Vegas.