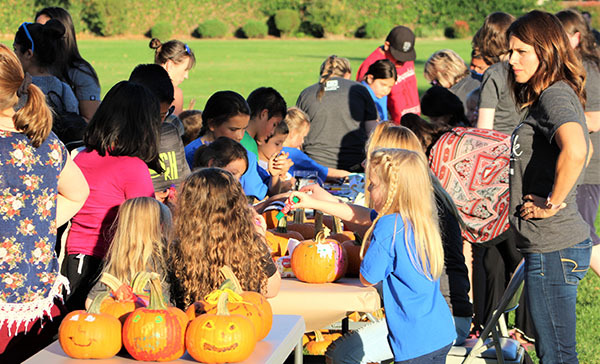 YUBA CITY — “Maybe we should do more than just pray.”

Chris Finchum’s comment to his wife Laurie while on their Christmas vacation in her hometown led this January to the first worship service of Citywalk Church in Yuba City.

“We’d been coming here for 20 years for Christmas,” Finchum told the California Southern Baptist. “We’d leave with a burden for the area, and we’d pray. Two years ago God planted in our hearts the idea of planting a church in Yuba City.”

The Jan. 27 launch, attended by 362 people, led to 16 making a Christian decision of some sort. As of mid-March, weekly attendance has stabilized around 170.

With so many California Southern Baptist churches averaging half that, how could it be that a church plant in the northern part of the state is doing so well? One thing it does not take is for the church planter to be a singer.

“I’m not musically gifted on any level,” Finchum laughed.

Experience helps, he acknowledged. He worked for 15 years in a para-church ministry, followed by three years as an executive pastor at a Florida church.

Friends help, Finchum continued. Four families moved from Florida with the family to help start a church with 23 Floridians between the ages of 1 and 67.

And family helps. Getting involved in children’s, teen and adult activities helps build relationships in the community.

But to start at the beginning, “I really enjoy starting new ventures,” Finchum said. “I enjoy building teams and sharing vision with people, and inviting them to be part of something.”

Two months after their trip from Florida to California, Finchum applied to the North American Mission Board for a church planter assessment. He wasn’t then a Southern Baptist, but knew several from his work in an organization that focused on teens.

“A lot of what I learned, I learned from other church planters, some with NAMB and some with other organizations,” Finchum said. “I’d ask a lot of questions, about plans, what worked and what didn’t work well.”

By the spring of 2018, “we started putting down some concrete plans and vision, and what we were going to need,” he said.

Among Citywalk’s sponsoring churches are a congregation in Brandon, FL, and Twin Cities Community Church in Grass Valley and Catalyst Church in Woodland.

“From the first time I spoke to Pastor Chris, I knew Citywalk was going to be a success,” Matt Van Peursem, founding pastor of Catalyst Church, told the California Southern Baptist.

“Chris is very intentional about every move they make to ensure it reaches those far from God,” Van Peursem continued. “He has a proven track record of growing ministries and bathes it all in prayer.”

The five Florida families arrived in 2018. Two of the men were engineers who found jobs in Sacramento; the other adults found local employment or stayed home with children. Everyone had to find a place to live.

“We had several gatherings at our home,” Finchum said. “We did a lot of meals together and began just spending time talking about the values of our church, and just in prayer for each other and our city, and specific people we wanted to see reached.

“Since we got here in June, we spent the entire summer being a part of local community events in the area,” Finchum said. “In August, we began to do community interest parties at least once a month through December.”

The “parties” each lasted about an hour. In August and September they took place at a coffee shop; in October, a park, where they hosted a pumpkin painting party; and a restaurant in November and December, with each “party” involving additional people who’d been reached during the month.

“It was at those events we shared our vision, what God called us to do, and we invited people to join the launch team,” Finchum said.

“We had invite cards that people on our team passed out,” Finchum said. Posters, social media such as facebook and Instagram, door-hangers, and a 40,000-piece mailer also promoted the church start, with a concerted effort taking place the six weeks before the Jan. 27 launch at River View High School.

The church’s website — Citywalkchurch.com — proclaims on its home page that it is “An alternative to church as usual.”

Yuba City resident Rob Haeberle, a banker with a Christian education degree who today serves the church as director of guest experiences, first heard about Citywalk from a facebook post. He was drawn to the church’s concept that “the church of Christ needs to be a place anyone can come and ask questions and not feel judged, that we should grow in our faith together,” Haeberle said.

“That was our tact,” Finchum said. “Investigate faith. Take your mask off. It seems that’s a lot of the crowd we’re getting, people who walked away from church decades ago, or who never had been in church but who have a longing and are here investigating.”

Chris Dowdy was a youth pastor in Florida and now is pastor of family ministries at Citywalk. “The approach we’ve taken has shown itself to have some merit,” Dowdy said. “At the end of the day, ministry is about bringing God’s truth to people. If we can help move the ball down the court, we’ve done our part this day.

“It’s an incremental process to meet people where they are and move them … closer to a growing relationship with Jesus Christ,” Dowdy continued. “Walking is not a sprint or a crawl but moving together toward a common goal.”

Citywalk is all about removing barriers, he said. Rather than “volunteers,” the church utilizes the skills of “bridge builders,” people building a bridge for people to connect with Jesus.

Three small groups soon will expand to add a youth ministry and a midweek gathering with large and small group activities. Support for a home for women is Citywalk’s first local ministry, and in May, “We’ll have a ‘Serve Our City’ Day, at the school we rent from, and one or two other projects,” Finchum said, adding, “We give 6 percent to missions through the Cooperative Program.”