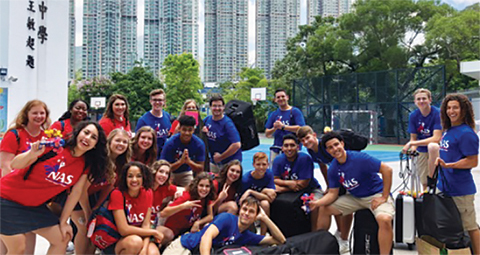 The California Southern Baptist Convention student choir tours every summer, to locations ranging from America to Asia to Australia. The group, led by Ted Campbell, is made up of students ages 14-22 from throughout California — and beyond — and learns music and choreography which they present in a variety of settings and to a large age-range. This year’s tour included China, Hong Kong & the Philippines. For more information contact Campbell at ted1betty@aol.com. The following are excerpted from the Singers’ daily updates:

Even when we have long days of performing and ministry, we still spend time with our prayer partners. In groups of either two or three we read some scripture, analyze it, and spend time together, getting to know each other. I personally love prayer partner time because it gives us time to relax, mature in our faith, and unwind after a long day.

After each set, as sweaty as we were, a few of us would grab some Gospel tracts and pass them out to people. I personally talked to about five people, and prayed with three girls who all accepted the Lord. It’s truly an opportunity to learn how to talk to people, even if they barely speak the same language.

(At) Kwun Tong Holm Glad High School (we) opened the concert with a routine called “High School Musical.” Now, you would think such a strong opening would surely invigorate an audience of young students. Well it turns out, we were wrong. It wasn’t invigorating; it seemed that every ounce of excitement and expression was solemnly internalized and turned to divine inspiration — because after the show, 19 kids came to Christ!

After the show I talked to Wang, a 15-year-old in his 5th year of school. He happened to be religiously neutral, so I began to tell him about Jesus and how much He would love to be part of his life. I gave him one of our tracts.

Today was filled with dancing, singing, sweating, a trip to Noah’s life-size Ark, and last but not least, a habitual stop at McDonald’s. For 8 a.m. breakfast we had our usual bread, tea and banana, which came along with one of Ted’s famous life lessons. After breakfast we grabbed our gear for the day and walked a few blocks to the community center in the usual Hong Kong humidity, like a line of red and blue ants, carrying heavy pieces of equipment. We performed for the normal crowd comprised of older folks (then) ventured via bus to Noah’s Ark Amusement Park and Resort, home of the actual-size replica, filled with live animals, video presentations and crafting areas.

Be praying for all of us and the people we are able to reach. Pray for the kids we already were able to plant seed in, that it may not be strangled and suffocated by the ways of the world, but be nurtured by the Spirit, grow and be fruit-producing.

Mia and I talked to a guy named Arthur who saw most of our performance when he was walking out of Starbucks. He was very nice and excited to talk to us, but he was unsure on what happened after death. He let us talk to him about what we believed — that Jesus died for us and our sins on the cross and He rose again so we can have eternal life. He accepted one of the gospel tracts and went on his way, promising to consider what we had talked about.

This morning, we had our daily breakfast meeting and discussed the word “joyful,” which played a huge role in the day as we journeyed to our last school in Hong Kong, Sharon Primary School. Our audience included students from three schools, and approximately 50 students from mainland China who were here to study under the Red Cross. We handed out tracts and a vast majority of the students raised their hands to accept a tract.

After our bus ride home, it was time for … DURIANTATION! This is when all of the first-year singers eat durian for the first time and try not to throw up because it is quite possibly the single most disgusting fruit on the planet. With the help of the “Rocky” theme song, they all conquered it like champions.

Find photos, videos and more about the tour at