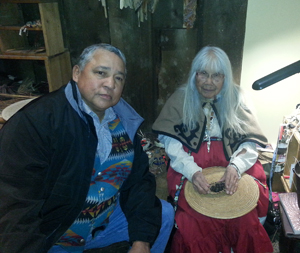 FRESNO – Three Native American leaders from North Carolina and Oklahoma recently visited California as the first step in developing a partnership to help with church planting in the Golden State.

Gary Hawkins, president of the Fellowship of Native American Christians based in Oklahoma, and Charles Locklear and Chris Hunt of Morning Star Ministries in North Carolina, recently met Ferm¡n A. Whittaker, California Southern Baptist Convention executive director, at a national Southern Baptist gathering of Native Americans. As a result, the men decided to travel to California to explore the possibility of a partnership.

During their three-day visit, they met with Whittaker and Howard Burkhart, CSBC church planting catalyst, to get an accurate picture of the current status of Native American work and to look for ways of partnering to start churches on and near the many reservations throughout the state.

The group also participated in a Skype call with Pastor Ethan Lawton on the Hoopa reservation in far northern California. Lawton recently graduated from college and moved to Hoopa. The church has grown from four to 16 people; he has started a swim team for the reservation high school and serves as its coach; and he started a Bible study on campus reaching more than 30 high school students.

Lawton shared with the men his vision and plans to establish new churches on neighboring reservations.

The second day was spent in Tuolumne County meeting with Kevin Gold, pastor of Tuolumne City Baptist Church, and another church leader. They made introductions on the local reservation of the Tuolumne Band of Mi-Wuk Indians, and were introduced to the tribal vice chief, tribal secretary and resident tribal historian and cultural expert. The morning was spent exchanging gifts and stories, along with a special visit in the tribal Round House, the tribal holy and ceremonial place.

As a result, a relationship has been initiated.

The group also met with CSBC staff in Fresno to discuss ministry possibilities.

California has a Native American population of 750,000, about half of whom are full Native American. This makes Native Americans the fifth largest ethnic group in California after Anglos, Hispanics, African-Americans and Filipinos. Additionally, there are 115 federally recognized tribes in California. Riverside is home to Sherman Indian High School, which draws students from several states.

While a few Native American people attend multi-ethnic churches, most do not attend any church; some are connected to the tribal and cultural religion. Among California Southern Baptists there are four Native American churches and two outreach Bible studies.

Partnership plans are now being made for mission teams, Christian Native American music groups and performers, and other ways to help start new churches and reach people for Christ.