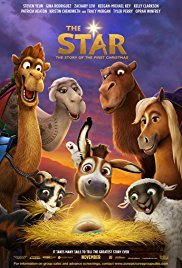 KANSAS CITY, Kan. (BP) — We can be thankful this late fall that along with “Hollow-wood’s” proliferation of comic book all-stars and crude comedies, theaters are also experiencing a spiritual renaissance with faith-themed films meant to stir and inspire.

Pure Flix Entertainment’s uplifting “The Same Kind of Different As Me,” about a rich businessman who befriends a dangerous homeless man, is now playing in theaters as well as “Let There Be Light,” a faith-based love story about hope and redemption.

Now comes “I’ll Push You,” which gets a theatrical release on Nov. 2, and “On Wings of Eagles,” which enters selected theaters on Nov 3.

And later this month, kids and their loving parents will be delighted with “The Star,” a new animated version of the birth of Jesus. Imagine that, a film about the birth of our Savior playing in theaters. Why, you’d think we were back in the early 1960s and ’70s when a proliferation of biblical-themed epic movies came from the movie industry, including “Ben Hur” and “King of Kings.”

I’ll Push You, distributed by Fathom Events, is the sacrificial love story between two best friends who decide to take a 500-mile journey. What makes it extraordinary is that one is confined to a wheelchair, the other having not only to push his friend through the not-always-hospitable landscape of Spain, but he must also care for his handicapped friend’s every need along the way. It’s nice that during this time when our iPhone-dominated culture causes us to live in an ensconced world, there are still reminders of the need for friendship and community.

From the Press Notes: “Justin Skeesuck and Patrick Gray travel across El Camino de Santiago. This feature-length documentary covers the struggle of the 34-day, 500-mile hike across mountains, deserts, hills, and valleys and features perspectives from family and friends. Even though the story begins with the challenges that come with Patrick’s answering of the invitation to push Justin in a wheelchair across northern Spain, it also explores the struggles related to Justin’s rare neurological disease. The parallel paths of Patrick’s experience in Spain and Justin’s life journey come together in a singular moment to reveal to Patrick something unexpected. It’s a one-of-a-kind documentary chronicling their pilgrimage, which will resonate with viewers craving stories of faith, hope, love, and the power of community.”

Not yet rated, there are a few uses of the s-word.

On Wings of Eagles

On Wings of Eagles, from Goodland Pictures, is a continuation of the 1981 Best Picture “Chariots of Fire.” The sequel takes up where Olympian runner Eric Liddell becomes a missionary to pre-WWII China. While it’s not of the same iconic status as Chariots of Fire in its storytelling, the depiction of Eric’s commitment to Christ and his service to others while in a Japanese POW camp is both moving and instructive for those of us who profess to be followers of Jesus Christ.

For me the main message found in On Wings of Eagles, starring the talented Joseph Fiennes (“Shakespeare in Love,” “Risen,” “Luther”), has to do with putting God first — having reverence for our Creator. Not a lot of that going on these days in a country that once closed all its stores on Sunday and schools didn’t schedule sports practices on Sunday mornings.

Eric Liddell gave up fame and luxury in order to serve his fellow man and reverence our God. On Wings of Eagles effectively shows his commitment to our Lord and to the world. This raises the question, how committed to our Lord are we if a sports practice comes before weekly worship?

On Wings of Eagles is rated PG-13 for thematic elements and harsh treatment in a prisoner of war camp.

On Nov. 17, Sony Pictures will release The Star, the highly anticipated animated version of the birth of Jesus as told by members of the animal kingdom. This com/dram adventure will be spotlighted later this month. Hint: it’s pretty good.

Movies, like parables, can teach and uplift as well as entertain. Sad to say, that doesn’t seem to be the goal of major film studios when it comes to the cinematic art form. And when moviemakers do set about correcting the ills of society, it’s generally from a decidedly secular perspective. This year, surprisingly, I’ve seen several quality Christian films featured in cinema complexes. Can I hear an “Amen”?