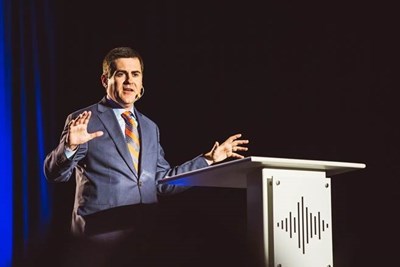 Moore’s keynote address came in a Thursday afternoon session that opened the three-day conference co-hosted by the ERLC and Focus on the Family. More than 50 speakers are to address the conference that coincides with the annual March for Life today (Jan. 19).

About the conference, Moore said he longs for the day when there is no need for EFL.

“I pray that our future children and grandchildren won’t have any idea why we’re here today,” he said. “I pray that when they look back and see Evangelicals for Life that they will say, ‘Well, what other kind of person is there?’ But until then, we stand and speak.”

Moore spoke on the Matthew 14 account of Herod having John the Baptist beheaded after the prophet had told him he should not have taken his brother’s wife as his own.

Followers of Christ “have to be the people who tell the truth,” he said.

Evangelicals need to avoid any temptation to keep the vulnerable invisible, Moore said.

Speaking of Matthew 14, Moore said the daughter of Herodias was used by Herod as an object. In reaction to her dancing, Herod demonstrated he was driven by his passions rather than bringing them under control, leading to the shedding of innocent blood, Moore explained.

Moore addressed some in the audience who he said are pouring out their lives in a way similar to John, thinking they have nothing to give in serving women in crisis pregnancies, refugees and trafficked women.

“Let’s stand for life consistently, holistically and with the Gospel that alone is the power of God.”