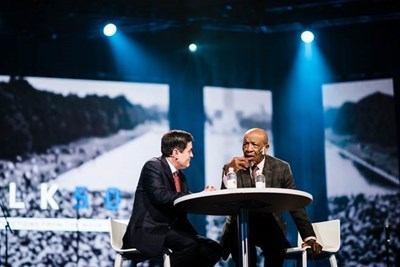 MEMPHIS, Tenn. (BP) — White evangelicals’ failures regarding racial justice call for repentance, a crowd of nearly 4,000 people heard speakers say Tuesday (April 3) on the first day of a conference to commemorate Martin Luther King Jr. on the occasion of the 50th anniversary of his assassination.

The first two speakers at “MLK50: Gospel Reflections From the Mountaintop” — a white Southern Baptist leader and an African-American pastor — both pointed to the church’s widespread failure to turn away from its past and present to abide by the teachings of Jesus and His Gospel. The two-day event, co-hosted by the Southern Baptist Ethics & Religious Liberty Commission (ERLC) and The Gospel Coalition (TGC), is taking place at the Memphis Convention Center half a century after King’s slaying April 4, 1968, in the same city.

The conference — held in conjunction with many remembrances of King in Memphis — is designed not only to honor the life and ministry of the leader of America’s civil rights movement but to consider the state of racial justice and how to achieve unity amid the country’s ongoing division. Conference participants were to be able to participate later today (April 4) with the people of Memphis, former U.S. presidents and others to remember King during a ceremony at the Lorraine Motel, where he was shot to death.

Earlier today, conference hosts announced the establishment of a program in King’s memory that will enable minority students from Memphis to receive full and partial scholarships to 15 Christian colleges, universities and seminaries. More than $1.475 million already has been raised for the fund.

In the conference’s first keynote address, ERLC President Russell Moore said King “preached to a beloved community, but he was not a beloved preacher in an awful lot of communities.”

Now, King “is relatively noncontroversial in American life, because Martin Luther King has not been speaking for 50 years,” Moore told the audience consisting of 3,890 registrants April 3. “It is easy to look backward and say, ‘If I had been here, I would have listened to Dr. King, even though I have not listened to what is happening around me in my own community.'”

“[T]ime and time again in the white American Bible belt, the people of God had to choose between Jesus Christ and Jim Crow because you cannot serve both,” he said, “and tragically many often chose to serve Jim Crow and to rename him Jesus Christ.”

In a world of racial injustice, hatred and bigotry, “the answer is not to rebrand but to repent,” Moore told the diverse audience.

He questioned why the evangelical church is so white and middle class. Jesus will build His church, he said, adding the question is whether it will happen with evangelicals.

“By choosing to conform to the world, Christians have created a segregated church,” Dates said. While exceptions exist, “today’s segregated brand of American evangelicalism is largely unrepentant of the sin of segregation,” he told the audience.

“This segregated brand of evangelicalism seems unready and unwilling to file divorce papers with white privilege and systemic injustice,” Dates said. “[African Americans] can sense evangelicalism’s unwillingness to tear away from the perks of segregation and slowness to prepare future leaders for a unified church.”

What has frustrated African Americans about white evangelicals who have a clear understanding of orthodoxy and the Gospel, Dates proposed, is: “We have expected you to be our greatest allies in the struggle against injustice. We wanted you to tell your churches and your congregations that God was never pleased with segregation and the systems that segregation has created. We have wanted you to use your influence with your governors and your politicians to end the long night of systemic injustices.”

In an ongoing series of examples that brought increasing cheers, Dates said, “We wanted you all to unflinchingly denounce the politics of fear and the alt-right racism that elected playboys while denouncing a black man who was loyal to his wife all his years in office and took care of his kids and did not disgrace America.

“[B]ut instead of finding allies in the fight for justice on the grounds of righteousness, we have encountered antagonists,” he told the crowd. “Instead of understanding our plight, we have been met with demands to justify our sentiments.”

Black and white evangelicals don’t have to agree, but they must love one another, Dates said. “Lovelessness is godlessness.”

John Perkins, longtime civil rights leader in Mississippi and founder of the Christian Community Development Association, told attendees Christians “have created gaping holes” in the Gospel but it is the only hope.

“[W]e are at a place of good news,” he told Moore in an interview. “We can’t play the game of dehumanization any more.

“We’ve got to go back to the Gospel. Reconciliation is the outcome of the Gospel.

“We’re in trouble people, and the solution is the church,” Perkins said.

“The love and the justice and the righteousness of God will be the last thing standing in the end,” Edmondson said. “Hatred, injustice, oppression got out to a fast start. They seemed so overwhelming. It seemed like victory was assured. But then came Jesus.”

He urged the audience, “You should stay involved, beloved, because we know we are running in a winning race, because 2,000 years ago in a borrowed tomb in Jerusalem truth crushed to the earth rose again.”

The MLK50 Dream Forward Scholarship Initiative announced April 4 will enable minority students in Memphis who show a love for Christ and the ability to achieve academic excellence to have access to a range of financial aid.

The 15 schools involved in the effort include several Southern Baptist Convention seminaries and state Baptist colleges.

“We believe there are multiple reasons for Christian colleges and seminaries to participate in this program and we are grateful to these schools who have so generously joined this effort,” said Brent Leatherwood, the ERLC’s director of strategic partnerships, in a written statement. “This initiative reflects that good work being done [by Memphis church leaders and activists] and offers a way to come alongside and support it.”

In a panel discussion featuring five Memphis pastors, SBC President Steve Gaines explained the change that came in his life and ministry after he became Bellevue Baptist Church’s senior pastor. God showed him and the church the need to love Memphis.

On the same panel, Ed Stephens of Golden Gate Cathedral in Memphis said black and white pastors need to develop genuine relationships in the cause of racial unity. “You cannot stay with your same race and expect your city to change,” he said.

The first day of the conference also featured brief talks, spoken word presentations and other panels.

Gov. Bill Haslam welcomed attendees to Tennessee and Memphis at the start of the conference.

Leading music at the conference were the worship team of Fellowship Memphis and the Tennessee Mass Choir.

King, only 39 at the time of his death, led the civil rights movement from his time as pastor of Dexter Avenue Baptist Church in Montgomery, Ala., in the mid-1950s until his assassination in 1968. In Memphis to advocate for sanitation workers on strike, King gave what became known as his “I’ve Been to the Mountaintop” speech the night before he was killed.

A simulcast and archived videos of the event may be viewed at http://mlk50conference.com/live/.