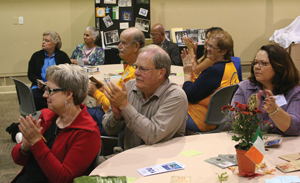 EL CAJON – Participants at California Southern Baptist Convention’s annual missions event heard from national and international missionaries, as well as volunteers who serve throughout California in a variety of ways.

Debbie Wohler was keynote speaker for the Oct. 21 event, held at Shadow Mountain Community Church in El Cajon. She followed the theme, “His Story, My Chapter” by telling of her more than 30 years of missionary service at Lake Tahoe. Among other evangelistic efforts, Wohler leads ski Bible studies during the winter and outreach ministries for children year-round.

“The God of the universe wants to use you and me and all that we are,” the CSBC resort ministries field specialist told the audience. “We often live in fear when we need to live in faith.”

Contradicting those who say they are unable to serve Christ, Wohler declared, “Don’t tell me there’s no way you can’t serve. You’re just not looking!”

While some things to which God calls believers may seem frightening or intimidating, God provides strength.

A parade of volunteer and career missionaries also shared their stories of ministry through Disaster Relief, literacy, community efforts and other avenues of service.

Those attending the missions event, sponsored by the CSBC missions discipleship group, were encouraged to tell their own stories with those sitting around their tables.

Cody Flannery and his wife, Cassie, provided music for the gathering. He is worship leader at Orangecrest Community Church in Riverside.