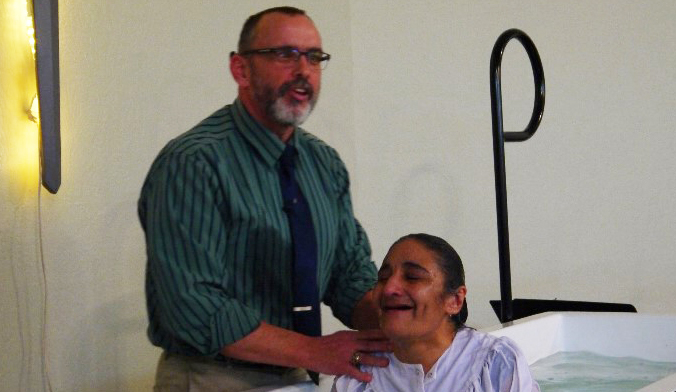 VISALIA — Mission work does not always require a passport and boarding pass. Sierra Baptist Church in Visalia recently discovered their mission field only a parking lot away.

The church had neighbored the New Visions for Women drug addiction treatment center for years, but Mark Wilson, Sierra’s bivocational senior pastor, was unsure how to build deeper relationships with the center’s residents.

Not only is New Visions for Women a secular organization, but the frequent turnover of its residents made building long-term relationships challenging.

“We had a cordial relationship, but nothing that would really draw the women to come and be a part of what God is doing at (our church),” Wilson said. “We’ve always struggled with how we can build a bridge across the parking lot.”

An idea for a project struck Wilson one day as he was raking leaves in the church parking lot.

“I thought about putting together a little packet of items to give the ladies when they come (to New Visions), as a welcome bag,” Wilson said.

He shared his idea with the center’s staff, who agreed to distribute the welcome bags on the condition that the recipients clearly understood they were gifts from Sierra Baptist Church.

“I asked if there was an item they thought would be beneficial,” Wilson continued. “They said the ladies could really use reusable sport water bottles, because they go on outings and need something to put their water in.”

Wilson’s research indicated that ordering water bottles bearing the church’s logo would cost $300, funds the church did not have available in the budget.

“But then a gentleman who had been visiting the church on Wednesday nights said he wanted to give $300 to the church for whatever we are trying to do,” Wilson said. “And I thought, ‘Wow!’

“I hadn’t even mentioned this need to him!”

Taking God’s provision as confirmation, Wilson ordered the water bottles and secured New Testaments from CSBC to include in the welcome bags. The women attending Tapestry were encouraged to bring supplementary materials such as non-perishable snacks and lotion.

During the two-day Tapestry Conference, participants took turns assembling 150 bags and writing personalized notes of encouragement to include with each one.

As soon as the conference ended, Wilson began taking the welcome bags across the parking lot.

“I started noticing the women as they walked in front of the church, sometimes they’d be carrying the water bottles,” he said. “So I knew they were getting the bags.”

To Wilson’s delight, some of the women from New Visions started slipping into the church for worship services.

“Sometimes we’d have 10-15 women there from next door,” Wilson said. “So that was exciting to see! They had a genuine spirit of worship.”

Wilson has seen God work powerfully in the lives of some of the women since they started attending the church.

“A couple weeks ago it was really a blessing because two women before the service even began came to me and said, ‘Pastor Mark, we really want to be baptized,’” Wilson recounted.

“So I talked to them about having a personal relationship with Jesus. They said they have asked Jesus to come into their life to be their Lord and Savior and they really wanted to be baptized.”

On Feb. 5, Wilson had the honor of seeing pure joy on their faces as they publicly proclaimed their faith in Jesus Christ through baptism.

“This is just a neat initial fruit of (this ministry),” Wilson said. “I look forward to seeing more fruit in the future.”