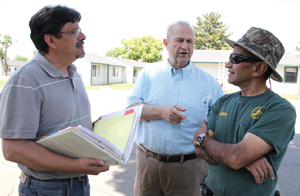 Mission offering helps Feeding Those Who Feed Us year-round

FRESNO – For most churches and volunteers, Feeding Those Who Feed Us is a 10-12 week ministry to migrants housed at one of California’s 24 migrant centers around the state.

But for a handful of folks, the ministry is year-round.

All those stuffed backpacks of school supplies churches distribute to 1,500 grade-school age children in the centers? All the food staples (beans, rice, flour, sugar) in bulk-sized bags? All the children’s pants, shirts and shoes? Those items are ordered, purchased, sorted and stored throughout the year so they’re available when churches need them in the summer.

“When you’re dressing 1,500 kids, you can’t just go to the store and outfit them,” said Tom Stringfellow, director of missions for Sierra Butte Baptist Association, who is one of the year-round volunteers. “From November through May I’m doing purchasing for the coming year.”

This is possible through two provisions: the program’s budget, supported by the California Mission Offering, and String- fellow’s self-described “super shopper” skills, so well-honed after 10 years of heading up Feeding Those Who Feed Us that he has personal/professional relationships with suppliers at Kohl’s, Kmart and other retailers.

“Recently in Roseville I spent $890 on girls’ blouses, and 100 percent of it was Kohl’s cash” – the store’s “cash reward” kickback program – “so I paid zero,” Stringfellow said. “I do a walk-through of several stores each month, and when the items we need get to serious discounts, I buy them. Summer clothes are seriously discounted in the fall, as are backpacks and school supplies. This way we have what we need when we need it, at a fraction of the retail cost.”

That savvy-shopper syndrome pays off each year, but was especially necessary this year, when the Feeding Those storage unit in Fresno was robbed of nearly $75,000 worth of items in January.

At least, that was the “street value.”

“I had to work extra hard to replace those items, but it’s come together just in time, and it sure was a good thing we’d not paid full price for those things to begin with,” he said.

One fringe benefit of the bulk shopping experience happens at checkout, when other customers inevitably remark on Stringfellow’s carts.

“They say things like, ‘Wow, you must have a lot of grandchildren!’ And that gives me a chance to explain what I’m doing and why, which turns into a witnessing opportunity,” Stringfellow said.

“And time after time, after they check out, people turn around and hand me their Kohl’s cash receipt and say, ‘Here, you take this and use it to buy more.’ I’ve collected several hundred dollars of Kohl’s cash this year that people offered to me, unsolicited, there at the store.”

Purchasing is only one of several year-round tasks. It’s preceded by a thorough inventory at the end of the migrant season to determine what’s needed for the following year. Oscar Sanchez, California Southern Baptist Convention’s migrant ministries field specialist, leads the inventory process.

One of the other year-round tasks is cultivation of relationships with the state of California and local housing authorities, which can change from year to year. Feeding Those Who Feed Us has a letter from the state granting permission to offer medical and dental clinics at the migrant centers, which must be renewed yearly. And local housing authorities at the centers must give permission each year for churches to distribute food, clothing and supplies, and offer Vacation Bible School.

“We are always recruiting churches, and raising funds, for this program,” said Sanchez, who has been the state migrant specialist for eight years.

“Oscar and I spend a lot of time encouraging more churches to participate each year,” Stringfellow noted. “So many of our smaller churches just can’t do this every year, so we have to keep filling in those spaces. And we try to partner new churches with veteran churches, because we can’t personally train every church.”

Occasionally there is opportunity to volunteer outside the migrant season. For example, two youth groups from Fresno area churches spent several days in late June stuffing backpacks with school supplies.

“This has to be done before we take it to the field, and 1,200 backpacks takes a good bit of time!” Stringfellow explained.

Last, and crucially, Sanchez leads the effort to connect migrants with local churches, especially migrant workers who make professions of faith or other decisions. Some of the migrants in California’s centers live a wholly migrant life, following the harvest from one region to another. Others return to their home countries (most often Mexico). Still others return to their permanent American residence, which could be in California, Arizona or Oregon.

“It’s one of the hardest things we do, but very important – connecting migrants with a church home, a Hispanic one if at all possible, wherever they go next,” Stringfellow noted.

Feeding Those Who Feed Us involves dozens of California Southern Baptist churches that reach out to the thousands of migrant families who take up temporary residence in California’s centers each summer. The adults in those families work daily on thousands of acres, primarily but not exclusively in the San Joaquin Valley, harvesting berries, olives, lettuce, nuts and many other varieties of fruit and produce. Most, but not all, migrant centers provide child care.

Through Feeding Those Who Feed Us, churches distribute food staples, new clothing and backpacks loaded with school supplies; conduct a Vacation Bible School with an evangelistic emphasis; and, in some places, offer free medical and/or dental clinics.

The ministry runs from mid-July to the end of August. But the background work runs year-round. And the impact … is eternal.