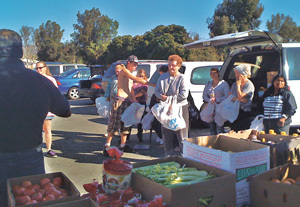 Ministry from marshmallows to meals

Like many such social ministries, food distribution often reveals yet more need; sometimes these are met, sometimes not. If Freddie Rodriguez is involved, though, it assuredly will be. To illustrate:

The first week Rodriguez, his wife, Yvonne, and other volunteers went door-to-door in a mobile home community to offer bags of food, they noticed one particularly grim-looking home with a dust- and weed-covered car in an especially unkempt yard. It looked utterly abandoned, and yet Yvonne felt strongly pulled to knock on the door. She emerged about 15 minutes later, shaking and in tears. The middle-aged woman who answered the door had invited her in with one insistent question: “Who told you to knock on my door?” When Yvonne began to explain, the woman interrupted: “No, who told you to knock on my door right now?” The woman, a former church member, said she had just turned on her gas stove with the sole purpose of committing suicide, when she suddenly heard the knock. “God brought you to my house,” she exclaimed. She recommitted her life to Christ that day.

At another mobile home, the volunteers could tell someone was inside, but the woman would never come to the door. Finally one day she motioned to them and called for them to come to the window. They discovered she had to go through the kitchen to get to the door – and the kitchen floor had an enormous hole in the middle. The volunteers gave her a bag of food, and recruited two volunteers from Set Free Christian Fellowship in Yucaipa to repair the hole the following week.

One Saturday Rodriguez and his team had an unusual number of bags of marshmallows to distribute (just one of those oddities of most food ministries). One young girl accepted her bag, then came asking for more: she was building models out of marshmallows for a school project. Her mother could only afford one bag – enough to make a model house but nothing more. The volunteers happily gave her two more bags. The next day, the mother called to say her daughter’s teacher and classmates were so impressed that all the students wanted to do the same project – and did the church have any more bags to spare?

“The most powerful impact is the door-to-door approach,” Rodriguez said. “There are so many needs, and you just don’t know them till you knock.

“We just knock on the door, ask how they’re doing and say, ‘We’ve been blessed with so much. How can we bless you?'” he explained, as casually and comfortably as if he were describing a visit with old friends.

Most of the food recipients are Hispanic single mothers or elderly Anglos who are sick.

Mission Yucaipa is the Hispanic ministry within Set Free, which was already distributing food to people in need: once a month at the church through a food bank, Saturdays during the summer at outreach worship services held throughout the community, and every Sunday after their worship service.

Each week, about 12 volunteers from Mission Yucaipa collect, sort and distribute bags of food – enough for 200-250 people – door-to-door in communities from Yucaipa to Banning to the San Fernando Valley (through a partnership with another church). In the summer they also distribute it Wednesdays and Fridays from a home in San Bernardino.

They receive the food from a variety of sources, some unlikely: Set Free, which has its own food ministry; the volunteer Dream Center of Los Angeles County; two other local pastors who do food ministry; and a Catholic church in Hacienda Heights.

Rodriguez explained: “There was a Catholic church that was burned last year in Hacienda Heights, and I happened to drive by there the following Saturday morning. There were 90 to 100 people there praying for their church, so I went inside and started praying for the people, individually. Halfway through a prayer this man approaches me and says, ‘You have to be a pastor. You pray differently from us.’

“Well what could I say? So he takes me to a back room and says they get food deliveries every Monday and Tuesday for a food distribution ministry. ‘Would you like some for your church?’ So for a year now we’ve gotten food two days a week from this Catholic layman!

The ministry also has had two refrigerators and a walk-in freezer donated. Because Set Free does not charge the mission to use the church facilities for worship, a portion of the mission’s income from tithes goes to this time- and labor-intensive ministry. Mission Yucaipa and at least six other churches are planning a free mobile medical and dental clinic Sept. 15, with the goal of seeing 400 patients.

Said Rodriguez: “Sixty percent of the doors we knock on, they need help. We take it to their homes. That’s just how we do it.”