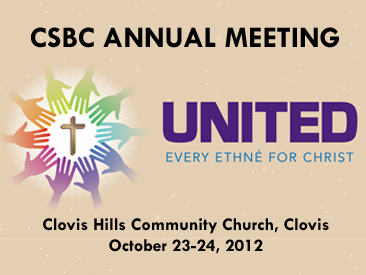 FRESNO – Messengers to the 2012 annual meeting of California Southern Baptist Convention will celebrate the diversity of congregations reaching California for Christ, Oct. 23-24 in Clovis.

Theme
“UNITED … Every ethné for Christ” is the theme of the two-day meeting set for Clovis Hills Community Church. CSBC President Steve Davidson said he suggested the theme “not only to celebrate the diversity within our Convention, but to demonstrate our need for each other in fulfilling the Great Commission in California.”

Davidson, co-lead pastor of Clovis Hills, said diversity among churches is not limited to “ethnicity, but also includes churches in various stages of life, from new to ‘heritage.'”
Davidson, who will conclude his second, one-year term as president this year, said, “In California today, it will require all of these different kinds of churches to fulfill the Great Commission and make disciples of every ethné.

Tuesday evening celebration
Along the diversity theme, Tuesday evening will be a time to “celebrate and inspire,” featuring CSBC congregations working with different “ethné.” Topping off the night will be keynote speaker Rob Zinn, pastor of Immanuel Baptist Church in Highland. Also included in the celebration will be a video/live theme interpretation and music by the California Baptist University choir and orchestra.
Though Tuesday evening will be “celebratory and inspirational,” Davidson said business also has to be accomplished. The committee on convention operations and Convention officers have attempted to streamline business to also be more celebratory rather than only “informational.”

Business
Topping business will be the CSBC Executive Board’s report on Focus 21 Task Force recommendations that were referred by 2011 messengers. The Board is reporting actions on four of the seven recommendations.

The budget reflects an increase of 2 percent to SBC causes and half a percent to CSBC ministries. The 2.5 percent increases are offset with a 2.5 percent decrease for CBU.

Also to be considered are several CSBC constitution and bylaws changes dealing with matters such as membership and officers.

Sermons
The annual sermon will be delivered by Matt Smith, pastor of Barabbas Road Church in San Diego. Also addressing the convention will be Davidson and

Preceding the annual meeting are the Fellowship of Church Musicians’ Conference, Pastors’ Conference, On Mission Celebration and California Women’s Meeting. Additionally, several language groups have meetings planned prior to the opening session. For a complete listing of functions visit www.csbc.com/annualmeeting.