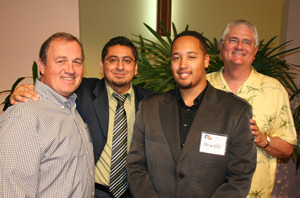 FREMONT – While highlighting church starting during their annual meeting, California Southern Baptist Convention messengers also referred the Focus 21 Task Force report to the CSBC Executive Board and approved a lower budget and Cooperative Program objective for the second consecutive year. The meeting was held Oct. 25-26 at New Life Church in Fremont.

Recognizing Church Starters
Emphasizing the convention theme, “Together: Making Disciples of every ethne,” the Tuesday evening session featured special recognition of 72 church starters who represented more than a dozen ethnic/culture groups. Each year for the past several years, CSBC has started about 100 new churches for African-American, Anglo, multi-cultural and ethnic groups.

Francis Chan, noted teacher and author, was guest speaker during the recognition service, encouraging the audience of more than 700 to get outside the church to show Christ’s love by serving their communities.

Vote on Focus 21 Recommendations
Convention messengers voted by 70 percent to refer the Focus 21 Task Force report/recommendations to the CSBC Executive Board.

The task force was appointed in 2010 and charged with discerning how California Southern Baptists could “most efficiently and effectively focus our efforts for the glory of God in fulfilling the Great Commission.” The motion also included the caveat that the task force bring a final report to the 2012 annual meeting.

However, the group brought its final report to the 2011 gathering. According to task force chairman E. Glen Paden, retired pastor and president emeritus of California Baptist Foundation, the group met several times in 2011 and felt they had completed their work. By mid-September the task force released a report outlining seven recommendations.

Those will be considered by the CSBC Executive Board in 2012, with a report at the annual meeting in October.

In making the motion to refer the recommendations to the Board, Paden said the task force wanted them to be “accelerants to the mission of California Southern Baptists” and to be “processed through the governance and under the leadership of the CSBC and its entities.” He noted the task force did not want to “bypass these processes,” but wanted to establish “a path for these groups to accomplish future progress in key areas.”

The motion to refer met with some opposition, including Mike Stewart, messenger from Foothill Baptist Church in Los Altos. He encouraged messengers to vote against referring the report and thereby defeat it.

His primary objection was the recommended 50/50 split of Cooperative Program dollars with the Southern Baptist Convention, saying, “We are told that is our fair share,” but adding, “That is too simplistic and it is not 1925 anymore,” referring to the beginning of the Cooperative Program in the SBC.

Stewart noted the Focus 21 report “expresses a vision for a much more powerful national convention and a weaker state convention.”

“I would urge you not to endorse this report, and by so doing communicate to Dr. Whittaker, the California Southern Baptist Convention Executive Board and the CSBC staff that we trust them to lead us (while) other SBC partners make clear their cooperative efforts with us in the future.”

Jim Meek, messenger from Trinity Baptist Church in Livermore, also spoke against the motion to refer, saying he believes in “the dynamic of each state convention voting as the Holy Spirit leads. We are a primary mission field in the world and believe we should dynamically consider each year what should go to California and what should go to the rest of the world.”

“If we don’t keep our base secure,” Meek added, “we will have nothing with which to give to international missions.”

Dwight Simpson, messenger from East Clairemont Southern Baptist Church in San Diego, attempted to table the motion by saying California Southern Baptists had only seen the report for a few weeks and time was needed to study it more fully.

“We are not talking about small changes,” Simpson said. “We are talking about serious changes and redirections of our life and work. I’m enthused about some of these pieces, but concerned about others.”

Parliamentarians ruled the motion to table out of order because a matter cannot be tabled until next year and must be decided by the body to which it was introduced.

“I don’t want this important a motion to be taken out of our hands at the risk of being implemented, even though we are saying it is not, without the body being able to speak. I agree with a lot here, but some I think need more debate.”

Hendricks moved to separate each of the seven items in the report, discuss them and vote on whether or not to refer.

Parliamentarians ruled the motion out of order since it was a motion to refer as opposed to a motion to adopt.

Walter price, messenger from Fellowship in the Pass Church in Beaumont, who as CSBC president in 2010 appointed the task force, encouraged messengers to vote for the original motion to refer.

“The task force has done the first year’s work by bringing its report, and in essence we are asking the Executive Board to do the second year work and bring back any recommendations for a vote in 2012,” Price said.

A ballot vote was taken, with 70 percent of messengers approving referral.

If the CSBC Cooperative Program objective is met, $1,964,200 is earmarked for the SBC, national and international missions and ministry. Even with the percentage increase, the amount allocated for 2012 is $111,800, or 5.4 percent, less than 2011 due to the reduced CP objective.

Before voting on the budget, Mike Stewart asked for clarification about the reduction in the amount of resources being provided to CSBC by the North American Mission Board for 2012. Stewart asked if the NAMB line item was indeed $392,376, or 11 percent, less than budgeted in 2011. Milton Steck, chairman of the CSBC finance committee that recommends the budget, said Stewart’s statement was accurate.

Stewart then asked if NAMB had given reasons for decreasing, instead of increasing, their participation in the “largest mission field in the United States.”

Steck said meetings with NAMB for budget participation in 2012 and 2013 were not scheduled until December. He noted there is “no specific reason,” other than the fact that both Cooperative Program and Annie Armstrong Easter Offering gifts are down this year.

Other Business
In other business, John Ratliff, messenger from First Southern Baptist Church in Willows, made a motion that the executive committee of the CSBC Executive Board be directed to write a letter to NAMB President Kevin Ezell “strongly requesting that he seek reconciliation with Dr. Tom Stringfellow, director of missions of the Sierra Butte Baptist Association.”

“Reconciliation requires a personal meeting between President Ezell and Dr. String-fellow at which President Ezell explains his reasoning for defunding” Stringfellow’s position at Sierra Butte Association.

Parliamentarians ruled the motion out of order. J.T. Reed of Fair Oaks said Robert’s Rules of Order states: “a motion that proposes action outside the scope of the organization’s object as defined in the bylaws or corporate charter is out of order.”

He acknowledged that “Robert’s” allows for the issue to be addressed if two-thirds of the body authorized its introduction, so Ratliff moved for messengers to consider the motion. After brief discussion the chair could not rule by raised ballots whether the motion passed; a ballot vote was taken and the motion failed.

Messengers approved two resolutions: one of appreciation for the City of Fremont, East Bay Baptist Association and New Life Church for hosting the annual meeting, and another calling for prayer, cooperation and communication between CSBC and Southern Baptist Convention entities.

Recommendations for nominees to serve on the Convention’s committee on committees and agencies – CSBC Executive Board, California Baptist University trustees and California Baptist Foundation directors – were approved without discussion or challenge.

Some 468 and 271 guests registered for the annual meeting.