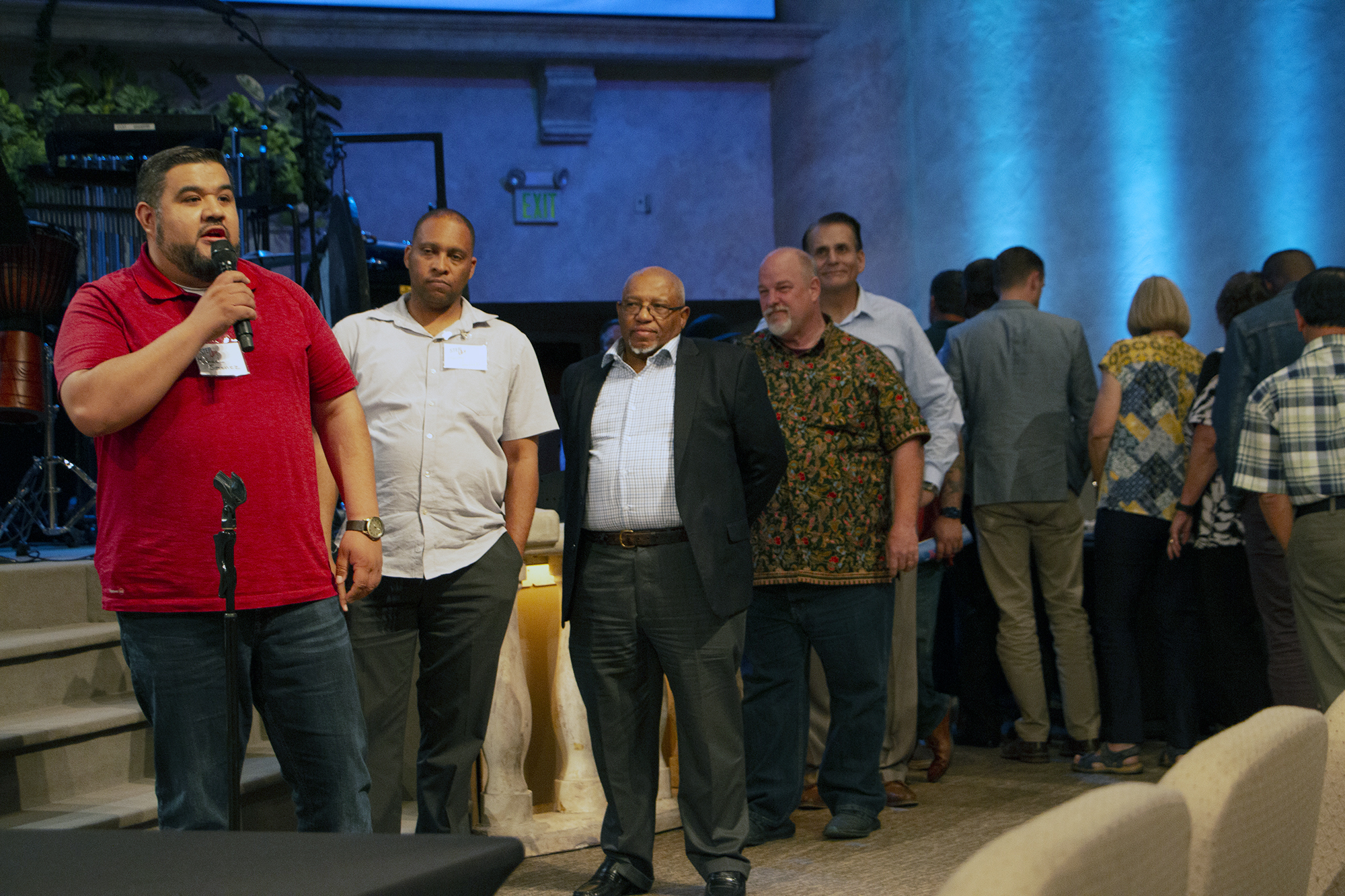 Messengers challenged to “Step Up” at annual meeting

EL CAJON, Calif. (BP) — Amid a challenge for churches to “Step Up!” to increase baptisms, church planting, mission going and missions giving, 410 messengers and more than 100 guests at the 2019 California Southern Baptist Convention annual meeting approved a 2020 budget that reduced the percentage of Cooperative Program gifts sent to the Southern Baptist Convention, and passed several CSBC governance-related recommendations.

Meeting at Shadow Mountain Community Church in El Cajon Oct. 22-23, messengers approved a balanced 2020 budget of $10.56 million, with a Cooperative Program objective of $6.425 million, down from $6.6 million for 2019. The 2020 spending plan includes a 5 point reduction in CP gifts going to the SBC.

Bill Agee, CSBC executive director, explained to messengers that the move was “necessary” because of years-long deficits in CSBC Executive Board and Jenness Park Christian Camp operations.

Cooperative Program gifts to the SBC were reduced from 35 percent to 30 percent. The funds will help CSBC and Jenness Park overcome deficit spending and afford both entities the opportunity to begin operating within a balanced budget. The printed budget noted the allocation of CP gifts would be readdressed in the 2022 budget.

Agee said CSBC has cut about $1 million from its budget in the past two years while CP giving has been flat the past decade. While CSBC is planning for a balanced budget in 2020, he noted Jenness Park deficit spending needs to be addressed.

“If Jenness Park doesn’t make it, the Convention doesn’t make it,” Agee declared. “This was not an easy decision for me,” he added, “but if we don’t do this, we’ll go out of business. It’s got to be done. What we need now is time.”

Agee noted three factors necessary before reinstating gifts to the SBC — a business plan for Jenness Park making it “sustainable,” an increase in CP giving by California churches that at least keeps up with inflation and adequate reserves for the Convention.

“We need two years to make this work,” he said. “I’m asking you to buy some time. Either we step up or we give up.”

The budget allocates the redistributed 5 percent by earmarking $150,000 for deficits at Jenness Park, $100,000 to address a growing need for California-funded church plants and $71,250 to address ministry opportunities presented to the Convention or for reserves to cover unexpected needs or deficits in operation.

Agee told messengers that fewer members will result in higher levels of participation and accountability.

The change still mandates the Convention have geographical representation with two members from each region; 14 “at-large members” provide flexibility in finding the most qualified people to serve. The reduced number also results in cost savings.

Nominations, which will select nominees for CSBC committees and boards.

Noting that combining the two will result in better stewardship of committee members’ time, Agee added that mission dollars also will be saved.

Additionally, messengers voted to allow up to four positions for California Baptist University “evangelical trustees” and approved increasing the number of trustees from 36 to 40.

The recommendation calls for non-Southern Baptist trustees to be active members of an evangelical church and in agreement with the Baptist Faith and Message.

Mike Nolen, pastor of Southwinds Church in Tracy and chairman of the CBU board, said the evangelical trustees would be “vetted” like all other trustee nominees by the Convention and be presented to messengers for election. He also noted that if all four positions were filled, the non-Southern Baptist trustees would never comprise more than 10 percent of the board.

All recommendations were approved by an overwhelming majority with little discussion.

During the Tuesday evening session, Agee issued the “Step Up Challenge” to messengers and guests, calling on churches to increase by 20 percent in 2020 in four areas: evangelism/baptisms, church starting, mission going and mission giving. More than 100 pastors and other church leaders responded to the challenge during the evening session.

In his convention message the next day, Agee acknowledged the many ethnicities and “contexts” in the audience, “yet we are all here for the same reason — to lift up the Lord Jesus.”

“You are the ones who will one day make a difference in your context, in your community,” he said. “All those things you committed to last night need to be fleshed out in your communities.”

Shawn Beaty, pastor of Clovis Hills Community Church in Clovis, was re-elected to a second term as CSBC president, the maximum allowed by the CSBC Constitution. Josh Sanchez, youth minister at First Southern Baptist Church in Anaheim, was re-elected as vice president. By recommendation from the CSBC committee on convention operations, Chris Galacia, associate pastor of worship and young families at Woodward Park Baptist Church in Fresno, was elected music director for the 2020 annual meeting. All were unopposed and elected by acclamation.

Messengers approved a resolution encouraging CSBC churches and members to accept the “Step Up! Challenge” to proclaim the “truth of Gospel” and to be “intentional and deliberate in mercy and in compassion showing love to our neighbors.”