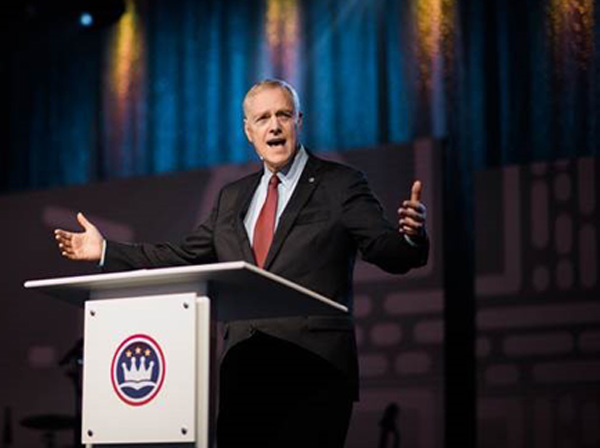 GRAPEVINE, Texas (BP) — Even a troubled marriage is a profound picture pointing toward the Gospel of Jesus, pastor Ray Ortlund said on the first day of the Southern Baptist Ethics & Religious Liberty Commission’s 2018 national conference.

Ortlund, lead pastor of Immanuel Church in Nashville, and more than 15 other speakers addressed an audience of about 950 people gathered Thursday (Oct. 11) for “The Cross-shaped Family” at the Gaylord Texan Resort & Convention Center in Grapevine, Texas, a suburb of Dallas. The three-day event will end Oct. 13.

“Your marriage in the world today is as sacred in the sight of God as the perfect marriage of Adam and Eve back in the garden,” Ortlund told the audience in one of the keynote addresses on the conference’s opening day. “[God] thinks your marriage is worth fighting for.”

Ortlund taught from Genesis 2 and three New Testament passages that quote from that account of God’s creation in explaining how the Bible defines and dignifies marriage. He noted:

— “Every marriage has problems. We’re really not very good at it. But marriage itself is not a problem. According to Genesis 2, God gave us marriage as a remedy.”

— “According to 1 Corinthians 6, the risen Christ has made your very body a sacred place here in the brothel of this world.”

— “According to Ephesians 5, people who will never darken the door of a church to hear the Gospel will see the cross-shaped Gospel in your profound marriage.”

Ortlund told attendees, “Your marriage points beyond itself to the glory of Jesus and the ultimate romance [of Christ and His bride, the church]. Your marriage is profound.”

Of the fall of mankind through sin described in Genesis 3, he said, “When God justly kicked us out of the Garden of Eden, He mercifully let us keep marriage. Your marriage is a remnant of Eden.

“On their wedding day, a husband and wife step inside the circle of their one-flesh union, and they become living proof in the world today that the Garden of Eden has not died,” Ortlund said.

The church must maintain the biblical view of marriage as only between a man and a woman, he told the audience.

“If we cave on the Bible’s definition of marriage,” Christians will lose not just a doctrine and some Scripture passages, “we will lose the whole point,” Ortlund said. “We have strong reasons to revere and preserve and rejoice in the biblical vision of marriage.”

In the conference’s opening keynote, ERLC President Russell Moore said Christians must see their lives defined by Christ’s work on the cross in order to love their families.

“[I]f you see yourself as crucified with Christ, if you — as Jesus tells us — find your lives only by losing them, then you are actually freed to love your family,” Moore told the audience.

Dallas-Fort Worth area pastor Matt Chandler spoke on the Christian concept of covenant in marriage during the final keynote of the conference’s first day.

Of wedding vows, Chandler said, “On the most romantic day of our lives, we say, ‘This could go bad, and I’m not going anywhere.’

“God’s good design for man and woman in the marriage relationship is deep, cultivated friendship protected by covenant faithfulness that leads to the opportunity for the mingling of souls,” said Chandler, lead pastor of The Village Church.

Among those speaking in short talks or as part of panel discussions Oct. 11:

— Kevin Ueckert, pastor of First Baptist Church in Georgetown, Texas, said walking through criticism is “a brutal journey” for a pastor and his wife. Particularly with recent criticism from outside the church, he said, “We’ve had to accept that the effect of that criticism in our hearts is something that the Lord wants to work in us to bring us closer to Him. And if we just defend ourselves against it as opposed to saying, ‘What can God teach us through it,’ then we miss out on what God wants to do through that and become bitter instead of becoming thankful because of what God did with it.” Ueckert is chairman of the board of trustees of Southwestern Baptist Theological Seminary.

— Andrew Walker, the ERLC’s director of research and senior fellow for Christian ethics, urged Christians to love and welcome in their home family members who identify as gay, lesbian or transgender. “Do not abandon them,” he said. “If you have that attitude toward others, you should crucify it.” He added, “[K]indness and empathy are not opposed to biblical truth but are the foundations for how the Bible calls us to love our neighbor.”

— Randy Stinson, senior vice president for academic administration at Southern Baptist Theological Seminary, said forgiveness is “the key to peace in the home.” He said, “[F]orgiveness is what I call in our home the oil in the machinery that keeps the gears from grinding.”

In addition, Todd Wagner – senior pastor of Watermark Community Church — spoke on discipleship in the home, and panels discussed the education of children and strengthening ministry marriages.