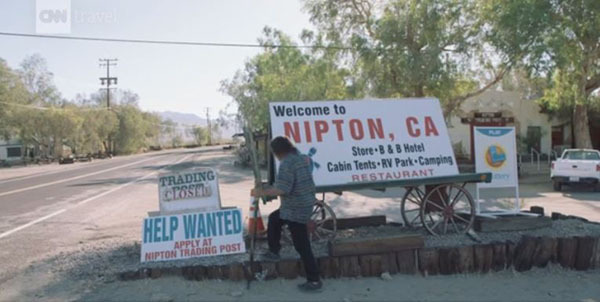 NIPTON, Calif. (BP) — A cannabis company’s plan to turn a Southern California town into a marijuana-focused tourism destination has prompted two local Baptist associations to make it a destination for missions too.

This month, the cannabis company American Green Inc. announced it is purchasing the entire 80-acre town of Nipton, Calif., along the California-Nevada state line, some 60 miles southwest of Las Vegas. American Green says it will develop Nipton into a “first-of-its-kind eco-tourism experience for conscious cannabis consumers,” CNN reported.

“The need for Gospel witness is magnified by” the potential transformation of Nipton into a marijuana tourism destination, said Harry Watson, director of missions for the Southern Nevada Association.

American Green’s plans for the desert town — which currently has about 20 residents — include marijuana retail outlets, cannabis-infused water and marijuana edibles, according to media reports. Nipton already includes an old west-style hotel, an RV park, houses and a coffee shop, the Associated Press reported.

High Desert DOM Don Parker told Baptist Press in written comments, “My hope is that we can work together to start a ministry or campus church in that area to proclaim the Gospel and help people understand the implications of rejecting the Gospel.”

Though marijuana remains illegal under federal law, recreational use of the drug has been legalized in both Nevada and California.

The two DOMs have scheduled a meeting in October to plan ministry ventures in Nipton.

Watson envisions beginning the ministry by asking American Green if local Baptists can provide a chaplain for the town to help employees and tourists grappling with emotional, psychological and spiritual issues. The ministry likely would be based in Las Vegas and model the chaplaincies at various Nevada resorts, Watson told BP.

Parker said goals for ministry in Nipton would be to “understand the people and serve them where they have needs,” “build relationships [and] trust” and “be a listener” — because “good listeners can be good influencers and share the Gospel as God draws people to Christ.”

While American Green CEO David Gwyther cited Nipton as part of a “cannabis revolution” with “the power to completely revitalize communities,” according to AP, Parker believes marijuana’s effects on Nipton will be negative.

Watson added that “making a change in society is the ultimate end” of Christianity, but “the ministry [in Nipton] will be purely to the people” in order to share the Gospel.

People who will travel to Nipton to abuse marijuana, Watson said, “know what they’re doing is wrong. But they need the opportunity to discover the Gospel.”

American Green’s development plan for the town will take 18 months, CNN reported, and cost some $2.5 million.