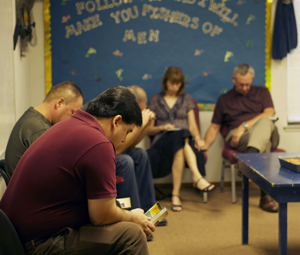 MANTECA (IMB) – For an outsider looking in at Sequoia Heights Baptist Church in Manteca, it would be hard not to ask the question, “Who are the Kisi?” Signs in each hallway and bathroom implore members to “pray for the Kisi;” the church website prominently features the Kisi people; photos and prayer guides are on many members’ refrigerators and bedside tables. In church services people pray for the Kisi and speak of Kisi individuals by name. It is evident that the Kisi (pronounced KEY-see) are deeply embedded in the hearts of Sequoia Heights members.

Why? Because the members of this congregation have committed to bringing the light of salvation into the spiritual darkness that surrounds the Kisi people.

Almost two years ago, Sequoia Heights Pastor Mark Mahaffie returned from a missions conference thinking it was time for his church to take the next step in missions. He then read David Platt’s book, “Radical,” and felt God’s call confirmed. He presented the idea of people group adoption to the congregation, and after praying, the church supported the idea with a unanimous vote of approval.

Once the decision was made, Sequoia Heights connected with the International Mission Board to learn more about choosing a people group and the process of adoption. The IMB website getting there imbresources.org shows a map of the 3,400 people groups around the world that are less than 2 percent Christian, with no known evangelism among them.

“The goal is to connect with them emotionally and spiritually so that we can share the most important thing … the love of Jesus Christ,” explained Donnie Land, a member of the Sequoia Heights mission team.

The congregation chose Acts 1:8 as their mission verse, and started thinking about how they could obey that specific command from God.

Sequoia Heights began by looking at their church history and the direction God had been leading them to that point. They saw trends that indicated Africa, which helped them to eventually settle on Tanzania, where one of their church members was serving as a missionary. That decision narrowed their list of people groups significantly, and they prayerfully moved from a list of 30, to seven, to three and then one. Ultimately God sent Sequoia Heights to the Kisi people of southern Tanzania.

Choosing the Kisi was an exciting step that spurred church members to a year of prayer, research and planning. The congregation is working together to obey God’s command to reach the Kisi for Him.

Priscilla Pearson,* an IMB strategy research associate, explained that adopting a people group does not work as a project championed only by a church’s leaders or a specific Sunday school class alone. As leaders change, engagement with a people group can be threatened.

At Sequoia Heights, people from different ages and skill groups stepped up to work on funding, plans, research, record-keeping, training and constant prayer.

Carmen Baugh volunteered to help with one of the more worrisome parts of planning: finances. Initial calculations showed that for their church to send three teams a year they would need to raise roughly $36,000 on top of their normal budget. That amounts to $700 a week beyond regular tithing.

“We figured we can’t do 500 car-washes or anything like that because there’s just no way to earn that amount,” Baugh said. “So, we prayed about it and did a pledge drive.”

With roughly 200 members, Sequoia Heights knew the project could not be funded without serious help from the Lord. The ministry has been funded for over a year now, and they see their financial success as evidence of God’s blessing on the work.

Church members say again and again that their international missions efforts will not succeed without first being rooted in prayer. John Garza took charge of the prayer efforts for the Kisi, and leads in around-the-clock prayer coverage each time a team goes out. From the time Sequoia Heights members arrive on Tanzanian soil until they’re safely back on a plane to the US, a member of the church body is lifting them up to the Lord, asking for their safety and the wisdom to act according to God’s will.

“I strongly believe that as Christ died on the cross, He bridged the gap so now we can intercede for the Kisi people,” Garza said.

Sequoia Heights has been among the Kisi three times; several of their members have set foot in Kisi villages, but the entire church has taken part in the ministry.

A lot of time is put into awareness meetings, events and lectures that update the members who are unable to participate outside Manteca. The church held a “Kisi Month” where they decorated the entire church building in an African style and spent time praying for, learning about and planning their ministry to the Kisi.

Even the youth engaged in missions training and spent more than a month learning about witnessing and how to use it in their lives as well as among the Kisi. Children and teenagers are encouraged to pray and sacrifice financially for the project just as the adult members do. Sequoia Heights hopes some of the youth will be able to go on one of the missions to Lupingu. They are eager to model God’s use of all ages in His work.

As the congregation becomes more and more involved with the Kisi people their enthusiasm only grows.

“It’s unbelievable that God is allowing us to do this,” Mahaffie said. “And it’s all because … we say ‘yes’ to the Lord with no exceptions. He has blessed that.

“Don’t say ‘no’ before you say ‘yes,'” the pastor urged. “Start with saying ‘yes’ and let God take care of all of the no’s that are in our lives – ‘It’s inconvenient. It’s too far. I don’t have a passport. I don’t have any money.’

“All of those no’s are just saying, ‘I don’t trust God.’ … The greatest adventure of your life is just about ready to start if you will say ‘yes.'”