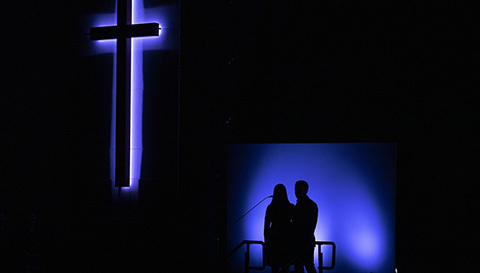 RIVERSIDE — Representing Southern Baptist churches throughout the United States, 21 International Mission Board missionaries were publicly celebrated during a service at Magnolia Church in Riverside Jan. 29.

The missionaries were voted on and approved by IMB trustees earlier in the week in California. Jeff Iorg, president of Gateway Seminary in Ontario, delivered the message at the service, spurring the congregants and missionary appointees toward their missional responsibility.

IMB President Paul Chitwood opened the missionaries’ testimonial time by reminding those gathered of the vital role their churches play in the sending of missionaries.

“How grateful we are for their willingness to go, and the privilege that God gives us to send them from our churches.”

For missionary couple Justin and Paige, their calling to serve overseas came at different times in their lives.

“During college, I went on a mission trip to West Africa,” Paige said. “While there, God began drawing me to international missions. However, I knew that if God wanted me overseas, He would also put that desire on my husband’s heart.”

Justin said, “While (Paige) was in West Africa, my thoughts and desires were far from the mission field. Six years later, I found myself on the other side of the world on my first international mission trip where God called me to obey His command to go to the nations.”

Along with their three children, Justin and Paige will serve among European peoples.

Jesse and Danielle’s heart for lost people in the Americas is rooted in Romans 10:14: “How can they believe in Him unless they have heard about Him: And how can they hear about Him unless someone tells them?”

“Then and now God has used Romans 10:14 to burden our hearts for the unreached,” Danielle said.

The couple will share the gospel with those who have not heard in the Americas.

Missionary couple John and Grace are returning to London after serving there with the IMB for two years.

“After graduating from university in December of 2015, we got married in January and started full-time ministry at Apex Baptist Church, helping plant their first satellite campus a week later, and then started full-time seminary at Southeastern Seminary a week after that. It was a crazy month,” John said.

“After two years at Apex Baptist Church, we moved to London to serve with the IMB, where God captured our hearts for the city over the past two years,” he continued.

John and Grace will serve among European peoples.

Jeff Iorg read from Ephesians 3 and challenged those in attendance to recognize the all-inclusive missional responsibility the Apostle Paul details in the passage.

As he began his message, Iorg thanked Chitwood and the IMB for the opportunity to share at the celebration.

“I’ve been preaching for 42 years, and I think I’ve spoken around 7,000 times and I would say that this evening, because of the eternal nature of our message and the sacrificial commitment of these we are charging to take the gospel to the nations, is one of the two or three most significant opportunities I’ve been given to speak,” he said.

Iorg went on to reflect on the moving nature of the missionaries’ testimonies that evening.

“Those testimonies, even in their brevity, move us deeply, emotionally, to help us understand the commitment that’s been expressed tonight,” Iorg said.

Throughout his message, Iorg reiterated the inclusivity of missional responsibility.

“The gospel has power. The only thing the gospel can’t do for itself is carry itself from person to person; we’ve been given that responsibility.”

Bill Agee, California Southern Baptist Convention executive director, told IMB trustees at their meeting that “God continues to do great things.” He added: “We are encouraging all of our churches to step up” to fulfill their missional responsibility.