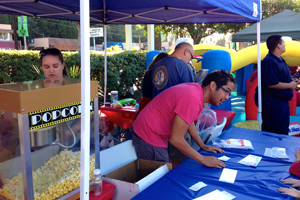 LOS ANGELES (BP) – God called David “D.J.” Jenkins to a community with a population of around 40,000. In the midst of a mostly upper-middle-class neighborhood full of young families, Jenkins set out to plant a church in a place where there were no evangelical churches.

In many ways Studio City is like a thousand other communities of around 40,000 people throughout North America.

Except that it’s very different.

Starting a church in Studio City

Studio City is in the heart of Los Angeles, the third largest city on the continent and what many consider the cultural mecca of North America.

“It’s a super-influential area,” said Jenkins, a native Southern Californian who moved back to the area to plant Anthology Church. “Up in the hills you have the stars like George Clooney and Justin Bieber, but in the lower neighborhood you have everyone else – the writers, the camera operators and the editors that make Hollywood go.”

The Studio City community where Jenkins lives is one of 114 neighborhoods in Los Angeles. There are also 88 other cities in the metro L.A. area, including 16 with more than 100,000 in population. A total of 4,700 square miles, L.A. County is larger than the states of Rhode Island and Delaware combined.

By nearly every demographic metric imaginable, metro L.A. is a behemoth – large, diverse and nearly overwhelming as a church planting destination. Though some of the largest and most influential evangelical churches in North America are in Southern California, greater L.A. remains largely unreached. Only 8.3 percent of the population claims affiliation with an evangelical church, according to the North American Mission Board Center for Missional Research.

The area also has only one Southern Baptist church for every 18,794 people.

Robby Pitt, NAMB’s Send North America: Los Angeles missionary, has noted that pushing back lostness in the city will require less of a focus on a monolithic Los Angeles and more of a focus on the diverse peoples and places that make up the region.

“I think one of the things that planters need to realize as we reach this city is that we must focus on reaching the neighborhoods like Westwood, Downey or Compton – rather than L.A. as a whole,” Pitt said. “It’s those neighborhoods that have the identity. There is no L.A. identity.”

Despite the vast task of reaching a metro area as large and diverse as Los Angeles, Southern Baptists have begun to see signs of progress. For example, Pitt said he’s seen a plethora of church planters trusting God to provide financially as they make their homes in especially expensive communities rather than trying to plant while living elsewhere.

“We’re seeing church planters come and move into places with a high cost of living,” Pitt said. “They’re demonstrating faith as they’re looking at how they can raise money and how they can make family decisions to cut back.

“They’re paying the price and moving to places of great need.”

Pitt also pointed to First Baptist Church in Woodstock, GA as another sign for optimism in the city. In 2014 Los Angeles became one of the last Send North America cities to get connected to a lead partner church. First Baptist took on the assignment after their own youth pastor, Matt Lawson, accepted God’s call to start a church in Los Angeles. As the lead partner for NAMB’s Send North America: Los Angeles effort, Woodstock has become a champion for the city within its network of influence.

“L.A. is too big for us,” Hunt said. “Woodstock has taken the role of lead partner for L.A. church planting. When you take on an area with 88 cities in it and 19 million people (based upon the Combined Statistical Area) – twice the size of the state where I live – and to realize how very few evangelical churches are there, I knew we couldn’t do it alone. We would need partners.”

Hunt began reaching out to pastor friends and urging them to join him on vision tours, reminding them they’d be under no obligation once they returned home. Hunt said the response to those vision trips has been overwhelming, particularly how many churches have connected to planters, and to the level they’ve done so.

This work of partnership development is critical, Pitt said, to the future of church planting in Los Angeles. He emphasized that all sizes of churches can help L.A. planters through partnerships.

“I think partner churches underestimate how encouraging they can be for church planters,” said Pitt, who previously was pastor of Fellowship Church of Burbank, a re-plant with attendance of about 50, that started seven other congregations in its building and helped plant five other L.A. churches.

“They think they’re too small. They don’t understand how significant their partnership could be. That’s one of the things we’re trying to dispel. You can make a huge impact – no matter your size.”

Pitt mentioned one particular small church from Louisiana whose pastor came to the city for a vision tour in 2014 and left with a passionate desire to get his church involved.

“They don’t have a lot of people,” Pitt said. “They’re thinking, ‘The closest we’ll ever be to L.A. is that we live in a state with “LA” as the initials!’

Hunt said pastors will likely have two reactions to the enormous challenge involved in reaching Los Angeles – either it will be too big and they’ll shrink from it or it will be a challenge that’s so big they’ll want to be part of it.

“When you realize that (Los Angeles) is telling stories to the world that are influencing culture, and we get an opportunity to tell His story to the story-makers – it’s an overwhelming opportunity to be a part of something bigger than ourselves,” Hunt said.