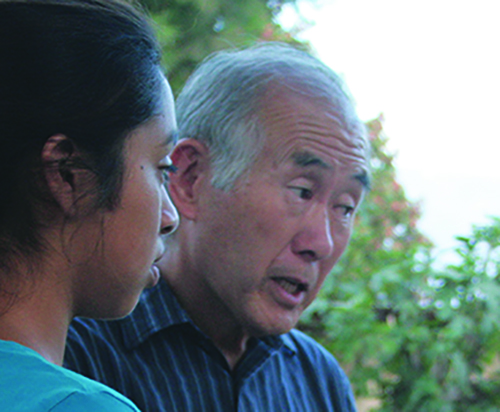 “On the first day of VBS, the children were shy and some of our younger team members were reluctant to initiate conversations,” said Rose Hsieh, the mission team leader. “But by the third day of VBS, everyone had gotten to know each other and the children began to open up to us.”

A highlight of the VBS for many team members was when, on the final day, a nine-year-old Native American girl raised her hand and asked to receive Jesus Christ as her personal Savior.

Perhaps no one was more excited by the young girl’s salvation than Steve Niino, a Japanese-American who was serving as the liaison between the team and the residents of the Pala Reservation. Niino, who has been pastor of Pala Fellowship since 2001, took early retirement from his corporate career to minister on the reservation.

“One-and-a-half years ago I preached a message at her mother’s funeral service,” Niino said. “She was only 37 years old when she died of heart failure.

“Though she drifted away (for a period of time), she had made a decision as a young teenager to receive Christ as her Lord and Savior.”

After her mother died, the young girl and her two brothers moved in with an aunt, which is a common arrangement on the reservation, according to Niino.

“The aunt is a good Christian lady,” Niino said. “She would always pray with the children after their mom died and she would talk about Heaven and how they could be with her again one day.”

As the young girl participated in Vacation Bible School activities, Niino believes the Holy Spirit was working in her heart and building on the spiritual foundation her aunt had been laying for the past year-and-a-half.

“The girl became a born-again believer, and I believe she will see her mom again someday,” Niino declared.

Reaching children for Christ is a primary focus of the ministries taking place on the reservation.

“One of the motivating factors of going to the reservation is that these kids need love,” Niino explained. “A smile on a child’s face is priceless. We just try to share God’s love and introduce them to Jesus.

“The gospel is paramount in what we preach there.”

According to Niino, teams like the one from Good Community Church are instrumental in spreading God’s love to the Pala people.

“I’ve had kids on the reservation already asking when (the team) is coming back!” Niino said. “They became friends with the team members.”

As relations with the Pala continue to strengthen, Niino encourages others — especially young people — to consider joining in the mission effort.

“Pala is a very easy, one-day mission trip,” Niino said. “You don’t even have to cross the border. This is the best way for young people, and even adults, to get their feet wet in serving God in some kind of missions outreach.”

Working on the reservation can be transformational, not only for the Pala, but for those serving.

“In my business career I worked for some of the most powerful corporations in the world. I was chasing after all the things the world values, and those are all the wrong things that simply will not last,” Niino said. “What I’m doing today is so much more fulfilling because it has eternal value.”