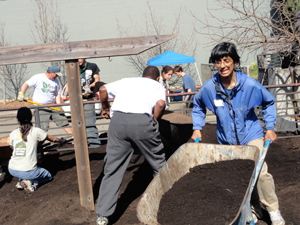 Literal fruit of labor growing at Telegraph Center in Oakland

OAKLAND – There’s metaphorical fruit from the labor of believers – and sometimes there’s literal fruit, too.

Such is what’s growing now in the formerly eyesore space of land that abuts Telegraph Ministry Center in Oakland: fruit trees, cabbage, lettuce, carrots, broccoli, tomatoes, beans and all manner of herbs. This cornucopia of produce is the result of the most literal kind of food ministry, which the center embarked upon early this year: a community garden.

“Our main ministry is emergency food and clothing to needy families and individuals, to about 1,200 individuals a month, and we only occasionally get fresh produce to give,” explained Chris Watson, director of the center – owned by California Southern Baptist Convention – since 2010.

“Fresh produce and meat are what our clients request the most, and of course we want our clients to be healthy, so a garden seemed like a good idea.

“We had some land that was just dead grass and weeds, and we wanted to do something with it that was not just pretty, but productive,” Watson explained.

So in February, he and center staff and volunteers began the process of converting their weed- and grass-filled plot of land into a community garden. To his amazement, partners began appearing seemingly out of nowhere.

“One man, whose mission is to help local gardeners produce extra to offer food banks, contacted us about working with us,” Watson said. “And from the connection with him, we gained other partners: FoodPool, the Victory Garden Foundation, Hillside Gardeners of Montclair, and just people from the community. God just sent us resources.”

Indeed: Waste Management donated topsoil and mulch – two “huge” truckloads full; nurseries donated plants and seeds; local hardware stores donated gardening equipment. The only major expense – besides the serious sweat equity involved in a garden – was updating the sprinkler system to drip lines – and a volunteer from the community shared expertise on that.

“Not only is this a great opportunity to get fresh food to our clients, it also has been an outreach for us,” Watson said. “This got people from the community, who don’t have food or clothing needs, to come to our center, and has been a great way to connect with them and build relationships with them.”

But even a well-planted garden suffers without tending. To that end, five to 12 volunteers come in weekly (mostly on Saturdays) to tackle a daily to-do list of garden maintenance. A special community involvement day saw about 45 volunteers do special projects such as a memorial garden. Volunteers, naturally, get first dibs on harvest.

The garden has three separate areas, all according to a master plan drawn up in February: one area of fruit trees and bushes; a kitchen garden with primarily spices and lettuces; and a third area (not yet fully developed) that includes everything from tomatoes to beans.

Watson – who freely admitted to being a gardening novice – said while at times it was challenging getting all the disparate groups on the same page, it helped that everyone had the same goal.

“I’ve been surprised at how quickly everything came together,” he said. “We sat down to talk in January and by April were already seeing things come up. It’s really rewarding to see it make fruit so fast.”

So is a “crop” of chickens on the future menu? Watson laughs and says, “Well … probably not, but you never know for sure!”

That would be a different kind of fruit, but with the same goal as all of Telegraph Center’s activities: ministry to those in need, in the name of Jesus.