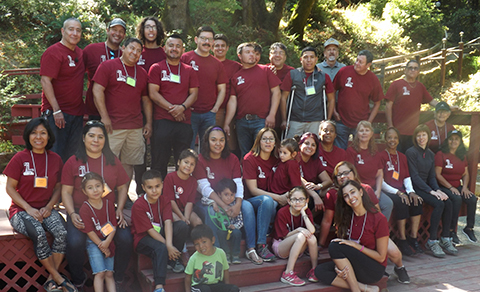 SAN RAFAEL — Reinvention is par for the course at Lincoln Hill Community Church, where Mike (Miguel) Rodriguez has been pastor for 10 years.

He estimates the church essentially has restarted three times in the last 10 years, as the North Bay congregation responds to waves of immigrants from other nations, and as God opens doors.

For the present, Rodriguez preaches in English and Spanish, thought-for-thought in each language:

“For God so loved the world that He gave His only begotten Son. De tal manera Dios amo al mundo que dio a su hijo unigenito. That whosoever believes in Him should not perish but have everlasting life. Que todo aquel que crea en El no perezca mas tenga vida eterna.”

Each restart, reinvention, reworking of the church has been to better fulfill God’s purpose for Lincoln Hill in a time of increasing and sometimes overlapping change, Rodriguez said.

“I don’t think we purposefully tried to do this (language back and forth) but God showed us what He wanted,” Rodriguez explained. “We completely embrace being a multi-lingual, multi-cultural, multi-faceted church that adapts to reaching the people around us.

“That’s led us to the place we’re willing to pay the cost of stretching ourselves linguistically or however we function week to week, and trying different things to be contextual to reaching people for the gospel in our area.”

The willingness to adapt may have first come in 2003, when First Baptist Church in San Rafael changed its name to Lincoln Hill Community Church. “We’re on Lincoln Avenue. We’re on a hill, and we’re desiring to reach our community,” Rodriguez said.

The church had withered by the time Rodriguez, born in Honduras, was called by the aging Anglo congregation in 2010 to his first senior pastorate. His last name attracted some attention, as the congregation had wanted, and the church started to grow, dependent on Sunday and Wednesday services in English and Spanish.

In time, a group of Brazilians joined Lincoln Hill, which led to the church’s refocus outward. English as a Second Language classes, a food pantry, prayer and street evangelism were among the ways the church began ministering in its blue-collar community.

But in time, the church’s Saturday evening service in Portuguese led to iOrganic Church. Between the start of that congregation in 2015 and the relocation of Golden Gate Baptist Theological (now Gateway) Seminary to Southern California in 2016, Lincoln Hill lost 27 key volunteer leaders from its ESL and food pantry ministries.

“That was really hard on our church,” Rodriguez acknowledged.

“We’re now training new people to respond to their calling,” Rodriguez noted. “We’re training our people to being good disciples of Jesus and good neighbors. Now we are focusing on our Koinonia groups. They are the focal point to influence the people around us. We say, ‘Come and share life in Christ.’”

“With Koinonia groups, doctrinal Bible study and reforming our base, hopefully we can do evangelism on the street again,” Rodriguez said.

The preaching in two languages during the same sermon was a request of the congregation.

“People were so excited for all of us to hear the sermon,” Rodriguez explained. “They said, ‘We all want to be together even though we are from different countries.’

“Our church tried to do two separate services and it just wasn’t going well,” but the congregation liked it when he juxtaposed languages one Sunday when the translation equipment failed and he translated for a guest speaker. When the equipment failed the next two weeks Rodriguez translated himself and never went back.

“When I think about it, it does seem pretty crazy,” he admitted. “We have a lot of people touched by it. They feel more unified by doing it that way, like we’re all together; and some people learn some of the other languages.”

There’s more to the story of Lincoln Hill Community Church. They have started two missions — Thai-Lao Baptist Church and Vietnamese Community Church — and both meet at the mother church.

“We make it work for sure,” Rodriguez said, including all three pastors in his “we.” The key is addressing minor issues before they grow, such as reminders to turn off lights when not needed.

“It takes a lot of communication, a lot of being willing to text, making phone calls and meeting in person when necessary,” Rodriguez said. “Everybody has their own way of doing things. It takes respecting everybody’s space and not infringing on anybody’s space or identity.”

Lincoln Hill doesn’t stop with outreach in its multi-cultural community. The congregation contributes 7 percent of undesignated offerings to missions through the Cooperative Program, the way Southern Baptists work together in state conventions, North America and across the world to fund missions and ministries. It also gives 3 percent of offerings to Redwood Empire Baptist Association.

“Ultimately, biblically, the throne of God will be surrounded by all people, all nations, all tongues,” Rodriguez said. “We need to be welcoming. We need to remember He loves the nations.”