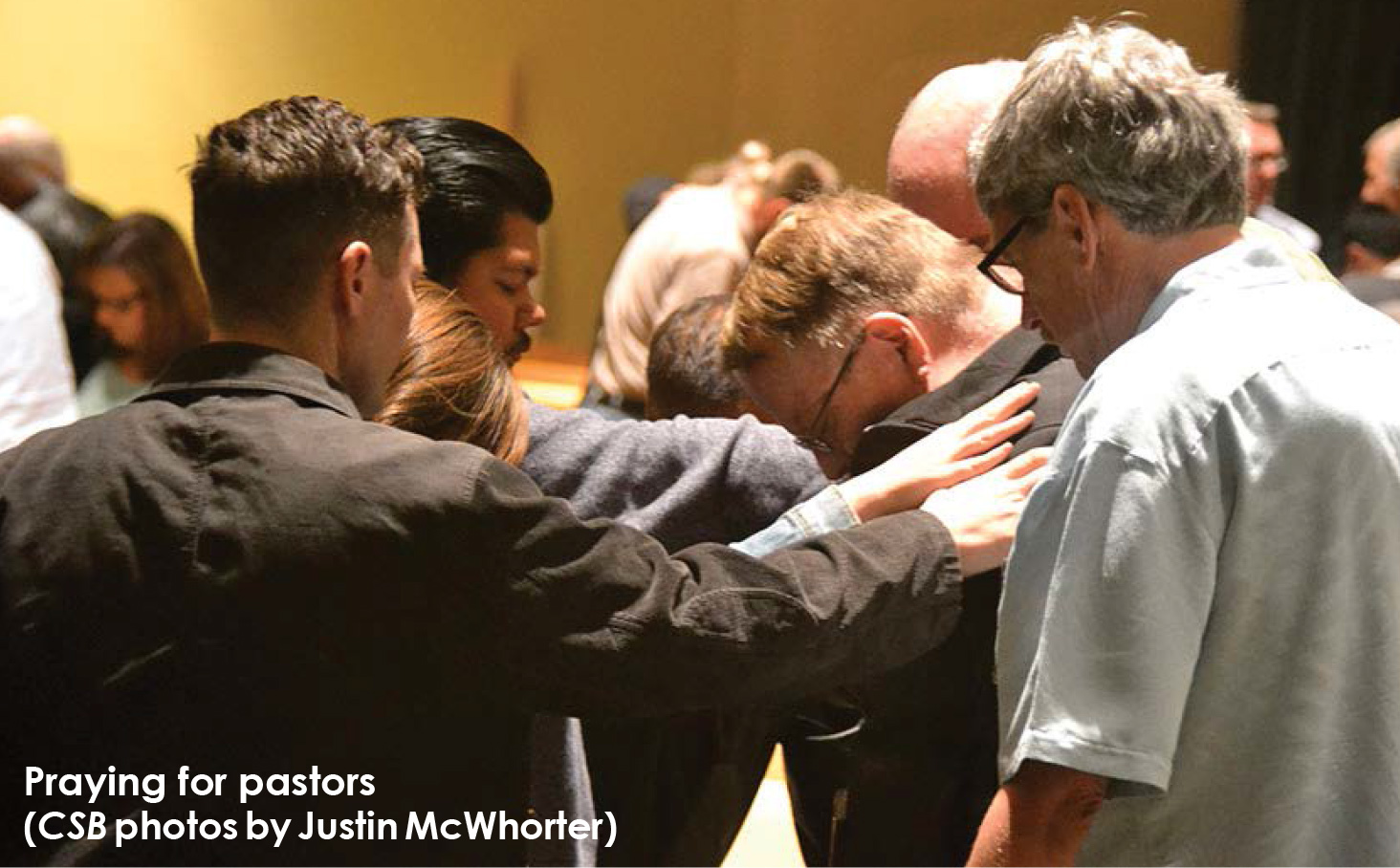 WEST SACRAMENTO — Pastors and others learned about “Leaders Discipling Leaders” during the 2016 Pastors’ Conference.

The Monday evening session began with Slunaker leading a focused time of prayer. Asking pastors to gather by the region of California in which they serve — north, central or south — others gathered around them and prayed specifically for their churches and ministries.

During his sermon later in the session, Slunaker noted that “prayer is essential in discipleship,” and addressed the biblical theology of the Apostle Paul’s mentorship of Timothy.

“From the start of Paul’s discipleship of Timothy he builds into him the concept of self-sacrifice for the sake of the Gospel of Jesus Christ,” Slunaker said. He imagined Paul telling Timothy, “If you have the gospel, you have all you need. The ministry is not a means of building your kingdom on Earth — it is about preaching the grace of Jesus Christ, Him crucified.

“Do not get caught up in worldly things because they do not satisfy.”

Slunaker also emphasized that character and focus are important to pastoral ministry.

“Don’t settle for anything less than God in His glory,” Slunaker encouraged, “because when it comes down to it, character is the most foundational aspect of ministerial leadership.”

Focusing on the gospel is another imperative for pastors, he said, noting it is Satan’s desire for pastors to give into temptation.

“If a leader falls into temptation and gives into sin, think of how much more terrible the fallout,” Slunaker said, referring to those who might walk away from the church and their faith because of a leader’s failure.

Also important in ministry is preparing for the next generation of leaders, Slunaker noted.

“What is the end role of discipleship? What’s the point?” he asked.

“The end result of discipleship is to make disciples who make disciples,” Slunaker declared, urging older pastors to raise up a generation to take the reins “while you’re still around!”

Jim Jackson reminded the pastors that they are called to be disciple-makers.

Jackson noted that an important characteristic of a disciple is submission, which Jesus exemplified when He washed the feet of the disciples at the Last Supper.

“We see at this beautiful dinner, Jesus does something amazing. Knowing that the Father had given all things into His hands,” Jesus became subservient, Jackson said.

Imagining that the owner of the home hadn’t scheduled a slave that day to wash the diners’ feet, Jackson noted that “the King does it.”

“Jesus exemplifies for all of His men what it means to be a discipler. (He) has gone from the master of the feast to slave. Now He returns to His position.

Jesus’ behavior shows another characteristic of a disciple: humility.

“Humility is the engine of Christianity,” Jackson asserted. “Without humility you have no right to call yourself a Christian. Because Jesus, who doesn’t have to be humble, humbles Himself at every level … to lift us up so we can glorify God.”

Jesus takes on the “unthinkable role” of servant, Jackson said, telling the pastors that whether they have a small congregation or the biggest church in town, “understand this: we’re all on the same team.”

“Take your focus off stuff and focus on the Savior,” he urged.

Jesus was sent to serve His creation on Earth — the ultimate humility, Jackson said, noting that Jesus also washed Judas’ feet, though He knew he was going to betray Him.

“If you lose humility you’ve lost the gospel, because you can’t preach to others to serve Jesus if you can’t serve like Jesus,” Jackson declared.

“In the struggle (for humility) we find that Jesus must make us humble or else we’ll become prideful.

“We must choose to exemplify the grace of God in our church,” Jackson said. “We must live in the sovereignty of God.”

If we don’t, everything will suffer, Hicks said, including church, ministry and family.

“As gospel leaders, there’s one question we need to ask ourselves every single day: how can we be the gospel leaders God has called us to be?”

God is always faithful to remind believers that they must look to and follow Jesus’ example, Hicks said.

“Jesus is God in divinity, and as a man, faced many distractions. (His) focus was challenged on a regular basis,” Hicks noted.

Even when facing the horrors of taking on the sin of mankind on the cross, Jesus faced distractions from His own followers. Instead of helping him they challenged Him, Hicks said, recounting the scene of Peter “rebuking” Jesus in Matthew 16.

“If He was challenged, how severe is our struggle as imperfect beings?” Hicks asked.

If anyone was supportive it should have been “those who were claiming to be the people of God,” he said.

But Jesus “set His mind on the things of God.” “If we don’t look to God’s Word for truth, we won’t find truth,” Hicks declared. “When we funnel our lives through God’s Word He’s faithful to bring us out of spiritual chaos, blindness and darkness into a spirit of clarity and light.

“Jesus set His mind on the things of God daily,” Hicks reiterated, and, like Jesus, “we must deny ourselves and not sell out to personal gain.”

“Jesus chose to submit to the will of God the Father. He denied himself to fulfill God’s will, and so must we.”

Pastors should ask themselves every day, “Is this about me or is this about God?” Hicks said, admitting it can be easy for pastors to take the place of Jesus as king of the church.

But Jesus “never forgot why He was here.”

“Pastors, we must remember that just because we are in positions of leadership does not mean we are denying ourselves and making sacrifices to be followers of Jesus,” Hicks noted. “What will be the state of our churches at the end of our ministries?

“Jesus knew that real heavenly rewards were saved souls,” Hicks reminded the pastors. “If your heart is on true heavenly things, your heart will be for the lost in this world

“We have absolutely no greater purpose on Earth than sharing the gospel with others,” he declared

A Leadership Transitions Panel featured Jackson along with Walter Price and Mark Rogers, who have successfully navigated the transition of a retiring senior pastor. Price was pastor of Fellowship in the Pass Church in Beaumont 32 years before “handing over the reins” to Rogers. Jackson transitioned five years ago from a church plant in Claremont, where he had discipled several men to take his place, while Larry Fisher, a retired California pastor and director of missions, was instrumental in Jackson becoming pastor of the Temecula congregation.

Other successful “hand-offs” in California Southern Baptist churches include Glen Paden and Bill Logan at Immanuel Baptist in Ridgecrest; Steve Davidson and Shawn Beaty at Clovis Hills Community in Clovis; and Paul Wilkerson and Ben Pate at Desert Springs in Hesperia.