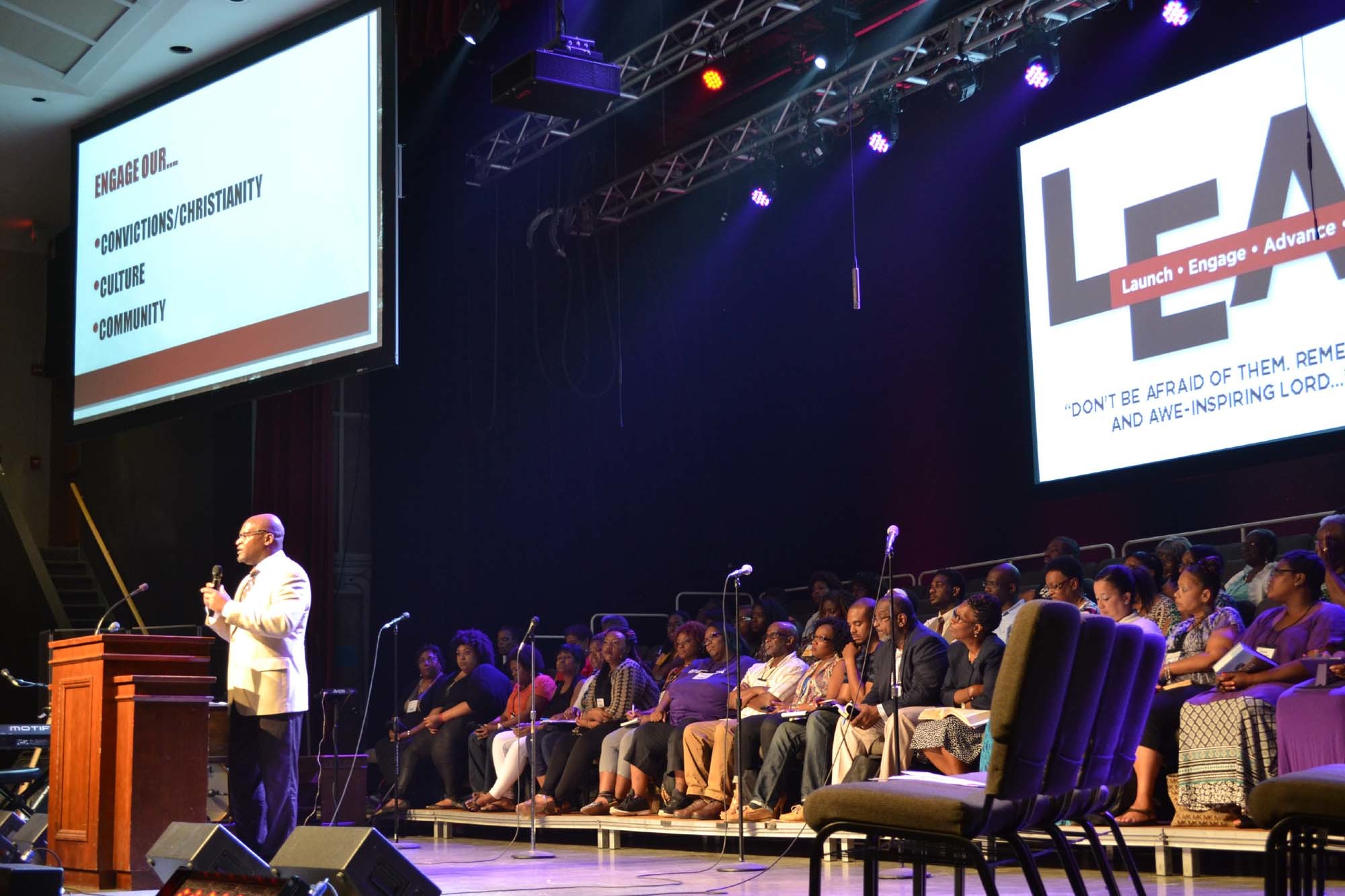 RIDGECREST, NC (BP) — Appeals for pertinent action amid turmoil following the killings of two black men and five white policemen were issued July 12 during a conference designed to strengthen black churches and families.

As more than 800 gathered at the Black Church Leadership and Family Conference July 11-15 at Ridgecrest (NC) Conference Center, leaders peppered sermons and seminars with advice drawn from scripture.

Using the conference theme of LEAD, an acronym for Launch, Engage and Advance into Destiny, speakers used the biblical story of Nehemiah as a framework to encourage constructive action approved and empowered by God and not defined by individual and personal agendas, nor limited by human strength.

Anthony Dockery, preaching from the theme of “Engage” during the July 12 worship service, said Christians must engage their Christianity, culture and community to effect change in these perilous times. Not only that, but Christians must follow certain “rules of engagement,” said Dockery, pastor of St. Stephen Missionary Baptist Church in La Puente.

Dockery referenced Jesus’ admonition to “turn the other cheek,” saying all sectors of society must be able to look past certain entitlements and freedoms — such as the right or permission to defend oneself — to achieve what is best for the whole nation.

“What I’m simply saying is what’s going to be the demise of our country is not Al Qaeda, it is not ISIS; it is our own freedoms,” Dockery declared. “It is implosion. It’s your freedoms infringing on my freedoms and me not moving back from my entitlement and my permission to allow the greater good for the country.”

When Nehemiah formed a coalition to rebuild the walls of Jerusalem in the presence of enemies, he operated through authority and power given by God, and necessarily guarded and protected God’s commandments while performing the work. Additionally, Dockery noted, Nehemiah acknowledged the Israelites’ sins of disobedience and not just the problems that resulted from disobedience.

“We have to understand the worldview of the Anglo and where they’re coming from, and try to process that information and then educate them as to where we are coming from,” Dockery said.

“That is the significance of engaging the culture,” Dockery declared. “Everywhere we go is our community.”

EW McCall, who retired from a 37-year pastorate at St. Stephen prior to Dockery’s tenure, commended the younger pastor while introducing him to conference attendees. McCall now lives in Dallas and works as a consultant in African-American ministry with the Southern Baptists of Texas Convention.

In an interview with Baptist Press, the longtime pastor and denominational leader said African-American Christians must have a plan of action to follow after all the talking, marching and grieving over violence end.

“I don’t see a strategy,” McCall said. “The only time the system changes for us minorities is when it economically impacts the majority community.

“Martin Luther King was nonviolent, but … he impacted the economic position of the majority. And once you have that pocket, the majority begins to think.”

“When the violence started … in downtown Dallas, that area lost millions of dollars because business was shut down,” McCall said of July 7, the night an African-American sniper killed five Anglo police officers and injured seven others because he was upset that Anglo officers had killed two black men in unrelated events in Baton Rouge, LA and St. Paul, MN.

“But what after that? What after the businesses recover?” asked McCall, voicing concern that the violence and injustice will continue.

He noted blacks must be active in legislatures and Congress to impact lawmaking. After pastors point out injustices, the next step is to strategize to determine how to change the condition of blacks in society, McCall said.

“If you’re ever going to make changes, you’ve got to be at the table where the laws are being written,” McCall explained. “If you’re not at the table, you are on the table being carved up and forgotten.”