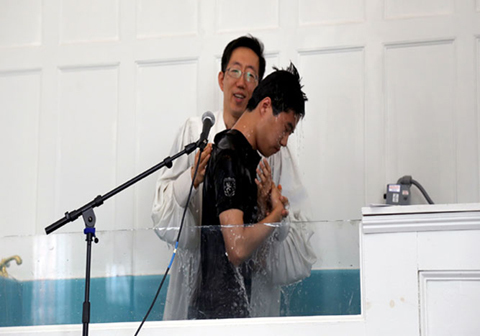 CAMBRIDGE, Mass. (BP) — Korean-American Chaplain Rebekah Kim remembers her first international mission trip 30 years ago when she shared the Gospel with Japanese, an ethnic group she had been taught to view as enemies.

The human mind alone cannot forgive Japan’s treatment of Koreans during the Sino-Japanese war, including the forced prostitution of Korean women and girls as “comfort women;” but the blood of Jesus has power to forgive, Kim told the Japanese. Kim, one of two Southern Baptist chaplains at Harvard University, was born during the Korean War, years after the Sino-Japanese War ended.

“I said unless I were a Christian, unless I had met the Lord, I would have come to Japan with a revengeful attitude. They were really shocked. That was my first line,” Kim recalled. “And then I began to explain why I had been changed as a Korean growing up in Korea. There is no sin and enmity the blood of Jesus cannot blot out.

“The Holy Spirit began to powerfully work in their hearts, and then the barrier, the ethnic barrier, could be melted right away through my testimony.”

Rebekah Kim pledged her life to college missions in 1971 as a college student, she said, and has ministered to college students in the U.S., and later abroad, the past 46 years. “I cannot quit because I committed my life for campus ministry missions.”

She led a group of 28 students from the University of California at Berkley on that inaugural international mission trip in the summer of 1987, spending a week each in Japan and her native Korea. Paul Kim, then pastor of Berkland Baptist Church in Berkley, Calif., remained in the U.S. for a speaking engagement with the Home Mission Board, now the North American Mission Board, at the 1987 SBC Annual Meeting in St. Louis, Mo. Rebekah had just given birth to their son Philip two months earlier.

The international missions outreach the Kims initiated through what is now Antioch Baptist Church has morphed to include summer mission trips to more than 10 countries, 13 church plants in five nations, and 60 international missionary families totaling 100 adults and children. For the past 30 years, Antioch and many of its church plants have led summer mission trips to an expanding list of countries, which has included China, Japan, Uzbekistan, Russia, Kazakhstan, East Timor, Myanmar, the Republic of Georgia, Turkey, Alaska and Armenia. Paul Kim is now Antioch’s pastor emeritus and serves as the SBC Executive Committee’s Asian American relations consultant.

The Kims and Antioch Baptist Church senior pastor David Um were among 180 leaders and members from their church plants who marked the church’s 30th international missions anniversary in Korea May 27–June 6.

During 12 meetings on seven university campuses in Seoul and Daegu, the team presented the Gospel to 222 Korean college students. While no official decisions for Christ were recorded, Rebekah Kim said several seeds were planted.

Three of the college students who made the original trip to Korea in 1987 returned this year, including Fairbanks, Alaska missionary Soomi Suh, and pastor Sam Kang and his wife Christine, already based in Korea. Two others the Kims mentored and discipled, John Kim and Christopher Liu, also made the trip.

John Kim, who immigrated to the U.S. from Korea 40 years ago as a child, will return to Korea at the end of 2017 to work in ministry there, he told Baptist Press. He’s a deacon at Philadelphia Mission Baptist Church, Antioch’s church plant in Philadelphia, Pa., and is taking online classes at Southwestern Baptist Theological Seminary (SWBTS).

“I really got the sense that, working in Korea or working for our mission there, even though I don’t deserve it, I just want to be a part of that,” he said. “God is working; why not join Him where He’s working? He is the Lord.”

By focusing their ministry on college students, Antioch Baptist Church has had the privilege of mentoring and ordaining indigenous pastors at all of their church plants, including five in Korea, five in the U.S., one in Uzbekistan, one in the Republic of Georgia, and one in Armenia. The Armenian ministry is Antioch’s newest, launched just one month ago on July 2.

A highlight of the Korean trip was the dedication service of the Katie Prayer and Mission House, named for the late missionary Katie Kim whom Rebekah discipled, and the inaugural worship service of Providence Baptist Church in Goesan.

Pastor Um has continued Antioch’s commitments to both the Cooperative Program of funding Southern Baptist missions and ministry, as well as missions led and funded individually by Antioch. The $30,000 the church gave to the CP in 2015, 5.5 percent of undesignated receipts, placed the church third in the state in CP contributions, according to SBC records.

“Our church’s goal for CP giving is this: as much as possible. Missions and evangelism, including CP, comprise the largest portion of our church’s budget, by a significant margin,” Um told BP. “We don’t own a church building and we don’t have any full-time staff. We spend our money for God’s Kingdom purpose, because where our treasure is, our heart will be also.”

Um and Antioch’s entire staff are bivocational, he said. For a few years, 2010-2014, Antioch’s CP giving dwindled to between 2.7 percent and 0.5 percent of undesignated receipts, as Antioch’s budget was strained to care for their missionaries, Um told BP.

“During those five years of decline … we were spending $600,000 a year to support 100 missionaries (including children) around the world. It was a strain on our budget,” Um said. “We’ve always believed in fully supporting our own mission work, as well as contributing to the CP. The mission churches eventually mature and become self-funding, as missionaries get jobs locally.”

The latest trip to Korea coincided with the 50th anniversary of Paul Kim’s first arrival in the U.S. as an unsaved 19-year-old in 1967, when he joined other family members in Hawaii. He accepted Christ in August, 1968 during a 30-day furlough in Hilo, Hawaii, Kim said, while serving two years in the U.S. Army during the Vietnam War.

“I felt God’s call [to] the Gospel ministry in my senior year in college at the University of Hawaii at Hilo in 1973,” Paul Kim said. He earned a master of divinity degree from SWBTS and was ordained for Gospel ministry by the late W.A. Criswell, then pastor of First Baptist Church of Dallas.

Paul Kim’s commitment to international missions included 10 years as an International Mission Board trustee, when he visited and encouraged Southern Baptist missionaries in more than 40 countries.

“I believe the church ought to obey the Great Commission in making disciples for church growth, whom the Lord has promised,” he said, citing Matthew 28:16-20, and 1 Corinthians 3:6-8. “A pastor ought to lead his congregation on missions with God by example, to plant multiple churches overseas to fulfill the Great Commission.”