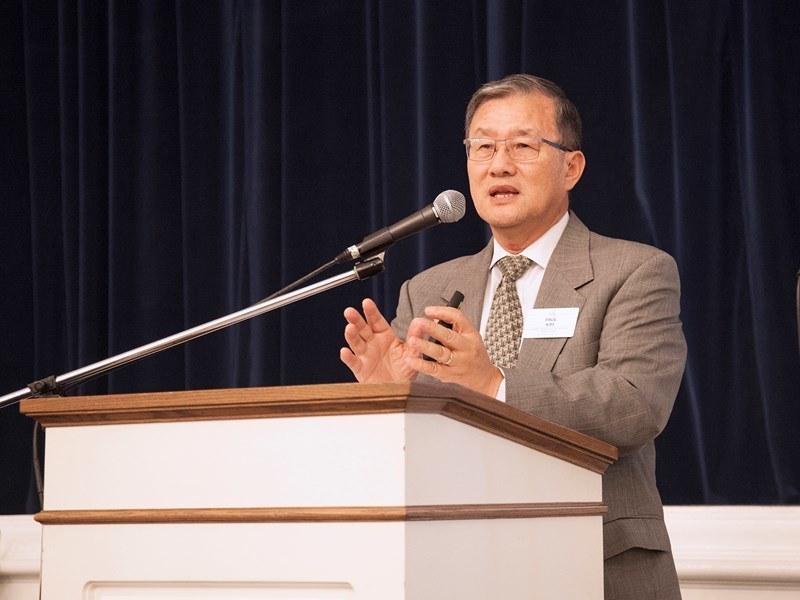 Kim is working to spread SBC awareness and build Cooperative Program support among Asian-American Baptists as the Asian-American relations consultant with the SBC’s Executive Committee — one of many Baptist leaders working with Frank S. Page, EC president, in an effort to understand and appreciate the diverse ethnic landscape in the SBC.

When Kim began his role with the EC, he made a commitment to visit each of the six SBC seminaries for an event he calls A2CP2 (short for Asian-American Cooperative Program and Church Planting). Much of the NOBTS A2CP2 was dedicated to church planting — a ministry task Kim hopes each seminary student will consider.

Kim, visiting NOBTS on Oct. 10, shared the inspirational story from his own church planting background. In 1981, he and his wife Becky launched Berkland Baptist Church in Berkeley, Calif. Their plan was to start a church to reach students at the University of California-Berkeley, one of the nation’s most prestigious yet liberal universities.

Many people told him the plan would not work, Kim recounted. Naysayers said that college students would not come to church consistently and they would not tithe. Kim trusted God’s leadership and launched the church anyway.

Early on the naysayers seemed right. Some Sundays the only people in attendance were Kim, his wife, his mother-in-law and the Kims’ daughter, an infant at the time. Over time, Kim began to reach Berkeley students with the Gospel and the church started to grow. Many of the students who came to Christ also experienced a call to ministry. Shortly after the Tiananmen Square protests in China in 1989, Berkland launched its first church plant in Asia.

While the church in California thrived, God called Kim to start a new church in Boston, Mass., in 1991. This time, the Kims would be ministering to students at prestigious universities like Harvard and the Massachusetts Institute of Technology (MIT).

At Berkland Baptist Church in Boston, God continued to bless the Kims’ work. As Berkland continued reaching college students, many of them likewise experienced a call to ministry. Ultimately, the two Berkland churches began to see church planting as a calling, as part of their DNA. The church ultimately planted numerous new churches in far-flung places such as China, the former Soviet Republic of Georgia, Japan, Kazakhstan, Russia, Turkey and Uzbekistan.

Kim played a key role in discipling and raising up men from the church who left jobs as doctors, lawyers, professors and engineers and moved their families across the world to plant these new churches.

One of the men discipled at Berkland, David Um, was called to pastor the church when Kim retired in 2011, while Kim continues to serve as pastor emeritus. Although the church has changed its name to Antioch Baptist Church, its church-planting DNA is still evident.

Um, a trustee at NOBTS, also spoke at the event, sharing how God led him from the world of software engineering to ministry.

The software company Um worked for charged $1 million per license and released a new version each year. Each new version rendered the previous version worthless. Um began to question whether he wanted to continue in such a business.

“What am I living for?” Um said he asked at the time. “As I was going through this spiritual crisis, I realized that the Gospel was for me because I was such a sinner. So I repented and I became a Christian through that experience of my own wretchedness.”

For the first years of his Christian walk, Um had little discipleship. A friend invited him to the newly-established Berkland church in Boston, where he joined and received the discipleship training he so desperately needed.

“People cared about my life and they were modeling for me what it means to answer, ‘How am I going to live for Jesus?'” Um said. “From that point on the trajectory of my life changed.”

The discipleship efforts of Berkland helped Um submit to a call to ministry. He ultimately left the world of secular employment, went to seminary and became a pastor.

During the meeting, Kim read from Acts 9, pointing out the calling of Saul, later renamed Paul. Like Paul, Christians today have been given the task of spreading the Gospel, he said.

“God has called us to carry His name, the name above every name,” Kim said. “We have the responsibility to do His work.”

As Paul “carried His name” on the missionary journeys, he planted churches, Kim said, encouraging NOBTS students to begin considering a call to church planting. Kim also encouraged those who will pastor established churches to consider sponsoring church planting.

“Carrying the name of Jesus brings hardship,” Kim said. “It is not easy, but it is a blessing.”

During his visit to NOBTS, Kim enlisted Abraham Lee, a leader in the NOBTS Korean Student Fellowship, to serve as the national Korean Student Council president for the six SBC seminaries for the coming academic year. The goal of Lee’s task will be to foster greater communication between the six Korean student fellowships. Plans include the development of blog to share seminary news, prayer requests and reports regarding evangelism, missions and church planting.