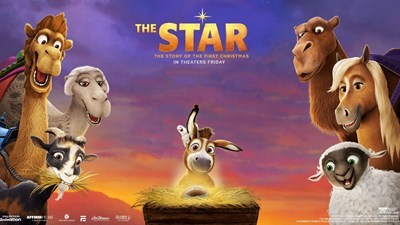 KANSAS CITY, Kan. (BP) — Though a bit early to hang stockings over the mantle, it’s never too soon to hear a retelling of the first Christmas. With that reasoning, Sony Pictures’ premieres “The Star,” a new animated version of the birth of Jesus, in theaters Nov. 17.

Alongside this kid-aimed adaptation from the perspective of the animal kingdom, I’d also like to feature “The Miracle Maker,” another interesting animated reenactment of our Savior’s birth.

The first thing I asked myself before viewing this movie was, Does this Disney-esque interpretation of such a sacred moment in mankind’s history come across as sacrilegious? My conclusion: sacrilegious, no; somewhat frivolous, yes.

Not much regard is paid to reverential matters in this cynical age. Indeed, little respect is shown for anything anymore, except for countless kickoffs every Sunday. And some would argue that those cultural events have also been defiled.

So, I wasn’t thrilled with the idea of animated animals taking the spotlight off the infant who would one day change the course of man’s destiny. But after seeing the screener, I gave way to another view of this lighthearted treatment of a holy event. Though rated PG, adults are not the targeted audience for The Star. The script has been fashioned in a way to make the spiritual aspect of the story understandable to its main demographic: little ones.

Gratefully, while utilizing this approach, the filmmakers avoid using Jesus, Mary or Joseph as the brunt of jokes. Well, OK, Joseph, like most sit-com husbands, is a bit of a bumbler. But it is clear that he is a good man. Here, the animals represent mankind. It is they (we) who are bewildered until the true meaning of life is born.

I believe that as children enjoy the comic antics of Bo the donkey played by Steven Yeun, Aidy Bryant as Ruth the sheep and Keegan-Michael Key as Dave the dove, they will open up to the picture’s sincere and biblical conclusion. What’s more, I suspect the 86-minute film will cause family discussion on the drive home. (PG)

The Miracle Maker also aids children in understanding the story of Jesus, from His birth to His great sacrifice for mankind. With the use of Claymation and its graphically striking two-dimensional animation, this made-for-TV production from 2000 presents the life of Jesus through the eyes of a sick little girl who encounters Christ through different stages of His ministry.

Devised to have genuine family appeal, The Miracle Maker (rated, G, available at Amazon.com) is able to relate the Jesus of the Bible to little ones without sacrificing the integrity of the Gospels. The kid-vid combines two very different animation disciplines and adds vivid special effects to make this interpretation mesmerizing storytelling for older family members as well.

While watching a children’s cartoon may sound as enjoyable as doing the dishes, it can have long-lasting rewards.

A few years I had to view each of the Tinker Bell made-for-DVD movies, both because I was reviewing them for several outlets and because my then-7-year-old niece loved Tink. With each DVD, my beloved niece would sit on the floor and, from time to time, look back at me on the couch, making sure I was watching. When I’d laugh at the exploits of Ms. Bell and her fellow fairies, my niece would be pleased that I was smart enough to appreciate the perplexities of her favorite forest wood nymphs.

My point: It means something to kids when you share a movie with them. And for years afterwards, it will mean something to you. Here’s the secret — never make fun of the production. Hint: watch your little one enjoying the movie. That helps a whole lot.