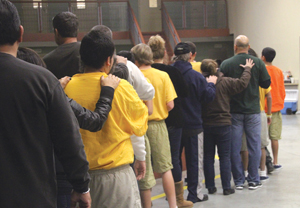 FRESNO – Of course there are children and youth around the world who have no personal experience with “Christmas” – that season of parties, gifts, shopping, travel, family gatherings, friend gatherings, and, admit it, more than a little “justified” gluttony.

You just don’t expect to find them in too many corners of the Golden State.

But for volunteers at Christmas parties for children and youth at the Fresno County Juvenile Justice Campus, this is a sad but frequent lesson.

“We’ve had so many kids who said they didn’t know what Christmas was until we came and did the party for them,” explained Carol Climer, whose husband, Ron, began ministry at Juvenile Hall 40 years ago after he became a Christian. He started with volunteers from Sierra Heights Baptist Church, where the Climers were then members, and it has grown every year.

Here are the basics:
Each year, nearly two dozen churches in Mid-Valley Southern Baptist Association provide funds and volunteers for Christmas parties for all the youth at Fresno’s Juvenile Hall. They assemble a bag of gifts for every youth and staff member on a Thursday night in early December, then hold a party for each unit at the facility the following Monday and Tuesday nights. They include games, food (much of it homemade), gift bags, the Christmas story, an invitation to make a decision for Christ, and brief but immediate one-on-one follow-up from volunteers, including an opportunity to share prayer requests.

Gift bags for youth – they all receive the same, facility-approved items – contain useful things such as socks, toothpaste, deodorant, soap, a wristband that says, “God loves you. He always has. He always will” – and a deck of cards.

Why the playing cards?

Carol explains: “We play a song at the party about a soldier who went to church and didn’t have a Bible but had a deck of cards, and he used every number and face card to represent elements of the gospel. We want the kids, the next time they see a deck of cards, to think of this song and the gospel.”

They are listening, apparently. Out of the 289 youth who attended parties this year, 108 made professions of faith; another 72 pledged to rededicate their lives to Christ; another 126 asked to follow up with a chaplain.

“And it’s not like it used to be. It used to be kids got sent to detention centers for something as simple as running away. No more. If you’re here now, it’s because you’ve been arrested for an actual crime, and more of them are serious than in the past.”

There is the question of how California Southern Baptist volunteers can go into such a facility and so blatantly share the Gospel of Jesus.
In short, attendance at the parties is completely voluntary; no youth are compelled. Additionally, if any of the youth request subsequent conversation with a leader of another faith – Catholic or Mormon, to use two actual examples – Ron Climer, as chaplain for the facility, provides for that.

“Kids in these campuses get treated educationally – they go to school year-round – physically, of course, and spiritually,” Carol said.

Youth from different units are not allowed to interact due to age or gender differences, or different reasons for their detention. This year that meant 13 separate parties, though all of them follow the same 90-minute schedule.

In this 40th year of the ministry, 21 churches from Mid-Valley Association provided 366 volunteers for the two nights of parties. The ministry requires approximately $7,000, all given by churches and individuals, as it is not included in the association budget.

“You just can’t help but have such a precious feeling about your volunteers,” Carol said. “Some of them have been in this ministry for 38 years. And some of them are former Juvenile Hall youth. That is extremely rewarding, knowing kids come out of the system and are eager to volunteer with us, wanting to give back.”

In a thank-you e-mail to volunteers, Carol wrote, “Thousands of youth have come to the feet of Jesus over the last 40 years because of what you do during the two nights.

“You have donated over $400,000 for gifts and food for the kids and staff over the years. Never forget – you left your handprints in the hearts of each youth you left behind.”