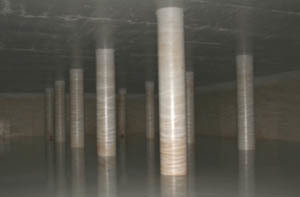 JENNESS PARK – It seems God is interested in water storage tanks. And sod, too.

That’s been the keenly obvious experience of Barry Lloyd and the rest of the staff at Jenness Park Christian Camp, anyway.

First, the 160,000-gallon water storage tank, which supplies drinking water, was in need of routine cleaning and maintenance. The cleaning revealed that more work would be needed.

“As we were taking care of cleaning, we found some rusting spots, which would eventually be a problem,” recalled Lloyd, who was guest services manager at the time. “In the meantime we got it clean, made it safe, and began looking at what would be needed to do a thorough maintenance job on the tank.”

The Jenness Park campus near Sonora currently houses 15 full-time staff and their families (for a total of 47 people). The water storage tank supplies water to them as well as an average of 10,000 park guests each year.

Fast-forward to January 2013, when Lloyd, now the camp’s director, recalled a farmer friend from the San Joaquin Valley who had said to call him when they were serious about securing the additional “secondary” tank needed while maintenance was done on the large tank. Lloyd called, and a few months later the farmer

said, “Found you a six-and-a-half-thousand-gallon tank. Tell me when you want it delivered.”

Then he added, “It won’t cost you anything.”

As if that weren’t enough, some park guests, after talking with JP’s new guest services manager, informed him they owned a plumbing company in the Valley. A few phone calls with those connections, and Jenness Park now had the right paint and other specs needed to complete maintenance on the larger tank.

“It worked out so perfectly,” Lloyd said. “From the farmer to the plumber to volunteers providing labor, it was like God said, ‘You counted the cost and did what needed to be done, and here is how I provide.'”

As icing on the cake, the architect who had provided advice about the tank three years earlier needed a tank, so he took the old one off the park’s hands.

“If you think that’s amazing, you should hear the story about our 20,000 square feet of sod for the main field,” Lloyd said.

That was five years ago, and here’s what was provided at no cost to Jenness Park: the professional labor to install it (in exchange for a men’s retreat), an 18-wheeler of manure to precondition the soil, and a tiller (along with an operator). “Good” grass salvaged from the field was moved to two other landscaped areas.

From water storage tanks to sod-covered fields, apparently God is interested in the details as well as the big picture.