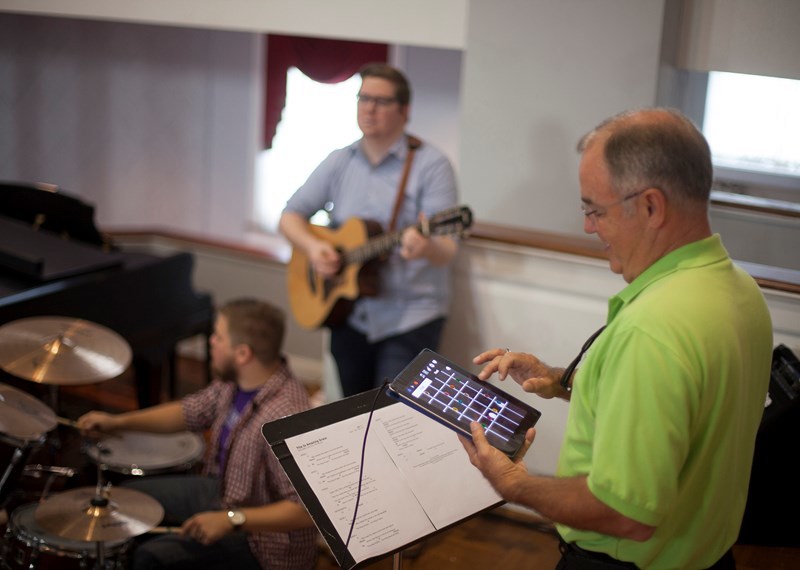 iPad apps used to ’round out’ worship team

NEW ORLEANS (BP) — For churches with worship bands, finding and keeping enough trained musicians to play all the instruments can be a struggle, said Darryl Ferrington, a music professor at New Orleans Baptist Theological Seminary. But he’s found the use of iPads and apps to be a way to fill in the gaps.

Ferrington spent the past year studying the use of iPads as instruments for his sabbatical project. What he found should serve as an encouragement to churches that struggle to find musicians to lead corporate worship. Ferrington published his research findings at www.appsinworship.com, along with keyboard, guitar, bass, and drum app evaluations, and a detailed guide for implementing the concept in a local church.

“Mainly, the idea is geared toward small churches who perhaps have a good guitar player and a good keyboard player, but don’t have a bass player or a drummer,” Ferrington said. “They can pull up an iPad and use one of the recommended bass or drum apps until they develop a musician or pray one into the church.”

As a professor teaching in a church music program, Ferrington remains deeply connected to the local church worship ministries. He is convinced that having someone play an iPad app is more desirable than using soundtracks — especially in a church trying to do contemporary worship.

The app-based instruments also provide individuals with an opportunity to serve the local church. Ferrington is convinced that better music and worship leadership encourages greater worship participation by the rest of the congregation.

“The goal [of the worship team] is to get the congregation wholeheartedly singing their praises to God,” Ferrington said. “Worship is a command from God. The better quality of musicians who are playing, the better the congregation will sing.”

Ferrington tested his idea at Greta Covenant Church, a small congregation just across the river from the music-oriented city of New Orleans. While Ferrington is a skilled musician, he had no experience playing the bass guitar. The church already had a guitarist, drummer and a keyboard player, but Ferrington wanted to see how the addition of a bass guitar would improve the sound and ultimately, the worship experience. After finding and purchasing a quality bass guitar app, he began playing bass on the iPad during worship. According to Ferrington, the concept worked in improving music quality and congregational worship participation.

“Our church is singing better because of the addition of the bass,” Ferrington said.

When identifying people to play an iPad as an instrument in worship, Ferrington is not looking for a highly-skilled musician. However, some basic music experience is helpful.

Since the goal is ultimately about edifying the church, willingness goes a long way, Ferrington said. He also noted a good ear and some basic music training will help things go a lot further, a lot faster, with less effort.

While Ferrington conceived the idea to “round out” the contemporary worship band at his small church, he believes it can help larger churches with traditional choral programs. Choir pieces often call for instruments that are not available in a particular church, Ferrington said. Through iPad apps, a flute or trumpet part can be added to the piece even if a flutist or trumpet player is not available.

Ferrington acknowledges that many people will view iPads in worship as a novelty at first.

“It is so radically different from what they have done before, people have the tendency to sit back and watch, wondering what is going on instead of being encouraged to participate more,” Ferrington said. “The first time I played the bass on the iPad, it took a moment of explanation.”

However, if the iPads are added gradually and with proper explanation, Ferrington believes that the technology will eventual foster greater worship participation by the congregation.

Something unexpected happened as Ferrington tested his theory by playing the bass on his iPad at Gretna Covenant. Over time he developed enough skill and confidence to desire to transition to a physical bass guitar.

Ferrington credits the use of iPads apps for not only encouraging greater worship participation at his church, it also encouraged him to want to pick up a bass guitar and learn to play it.