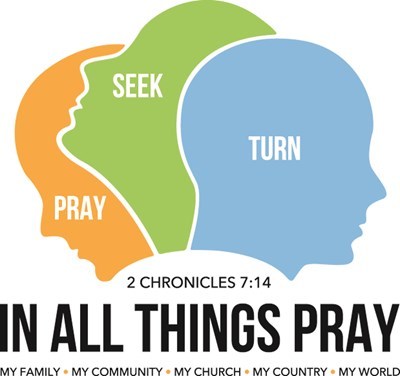 ‘In All Things Pray’ opens 2018 for Southern Baptists

NASHVILLE (BP) — The month-long prayer emphasis “In All Things Pray” opens 2018 on the Southern Baptist Convention calendar, encouraging churches to pray corporately for 60 minutes at least weekly in January.

Standing on Acts 1:8 and 2 Chronicles 7:14, In All Things Pray encourages 10 minutes of Scripture reading, public leadership and worship; 20 minutes of vocalized prayer requests, and 30 minutes of guided prayer in each hour-long service, event organizers said.

“We are hopeful churches will use the 10-20-30 corporate prayer model in at least one of their weekly gatherings during January,” said Roger “Sing” Oldham, SBC Executive Committee vice president for convention communications and relations. “The 10-20-30 model is very interactive and is ideal for a midweek prayer service.”

“We think people will be refreshed by spending a complete hour in focused prayer,” Oldham said, “and encouraged at how quickly a one-hour time of prayer will pass, perhaps spurring them on in their personal times of prayer at home.”

Four categories of prayer concerns drawn from Acts 1:8 are offered among resources at InAllThingsPray.net for suggested use, all or in part.

Target this group by creating a prayer list of family members to pray for daily. Using the CrossRoads Prayer Evangelism ministry referenced at InAllThingsPray.net, encourage congregants to list five friends and track their prayer and outreach targeting the individuals. Ask church members to write on note cards the names of unchurched and lost family members, bring the cards to the altar and place them before the Lord.

Lead church members in praying specifically for evangelistic events on the first half of the church’s 2018 calendar, such as Vacation Bible School, revivals or special music programs. The church’s continued health, ministry teams and committees are among other suggested prayer concerns.

The United States and its peoples

Read 1 Timothy 2:1–6 aloud during the morning worship service and encourage prayer for the nation. Mention the names of elected officials during the pastoral prayer. Ask the Lord to call from within your congregation members who will serve as pastors, missionaries and church planters. Pray for the different ethnicities living within the nation and for the racial reconciliation that is possible only through salvation in Jesus Christ.

The world and its people groups

During the pastoral prayer, petition the Lord on behalf of those within the congregation who may be sensing a call to international ministry. Ask the Lord to give International Mission Board trustees and leaders divine wisdom and guidance in challenging Southern Baptists to be on mission with God. Ask for wisdom and mercy for international missionaries working in dangerous locations.

Additional resources and promotional materials are available at InAllThingsPray.net.