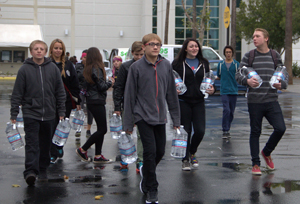 Ignition teaches students that “It Matters”

ONTARIO – More than 1,200 students and their leaders learned “It Matters” being a Christian and living a Christ-filled life, at the Ignition Student Conference, Dec. 29-31 in Ontario.

Speakers, leaders and musicians all pointed to the conference theme, “It Matters,” when making a decision to follow Christ; exercising the disciplines it takes to become more like Jesus; and dealing with persecution, sacrifice and pain that comes from being a Christian.

Daryl Watts, California Southern Baptist Convention student and family specialist and organizer of the event, said sometimes “the topics we convey through the conference seem heavy,” but the planning “always finds a way to incorporate and balance fun and excitement.”

Attendees encouraged to base their actions on Christ.

Brock Gill, an illusionist and evangelist from Nashville, told the students he is a “daredevil, a risk-taker.” As such, Gill said he has to “calculate” the risk to determine if it’s worth taking.

“I know that one risk worth taking is communicating the gospel,” he declared.

Gill told the youth and their leaders that it matters to put yourselves out there in communicating the gospel because there is a risk of losing things such as “friendships, relationships, promotions at work,” etc.

Gill also told the audience they should look for trials.

“Trials are coming not only to test your faith, but to build your faith and to give God praise and honor.”

From his experience, Gill said, “I’d rather go through trials with God than to live a peaceful, happy life without God.”

Students reminded that the Bible matters because it is God’s story.

Continuing with the theme of being tried in the faith, Brent Crowe, a popular speaker from Orlando, encouraged students to understand that God is sufficient, and to desire to experience God and trust Him completely during the storms of life.

He underscored that trials usually are “short-term” and that each individual must choose how to respond. Crowe encouraged the students to “stare at the storm and decide to bless His Holy Name.”

Crowe also said the Bible matters because it is God’s story “that gives definition and meaning to every other story being told.”

Putting that into perspective, he said, “It is God’s story that gives meaning to the story you will tell with your life.”

Crowe added that “redemption is the predominate theme of God’s story.”

“If not, then it is not worth telling.”

“What does it look like when redemption is the theme of your story?” Crowe asked the students.

Crowe encouraged the audience to make redemption the “theme of your story. Illuminate culture by being salt and light!”

A series of TED talks were offered including one about sharing the Good News and another on having a daily quiet time.

This year a series of “TED Talks” were added to the Ignition lineup – they cover almost all topics but were started to key on technology, entertainment or design – hence the name TED.

Two of the talks were about sharing the Good News and having a daily quiet time, issues both speakers said matter in a person’s Christian life.

“The Gospel is Good News,” she said. “Good news is not meant to be held in, but shared.”

Watts outlined the essentials of a daily quiet time with God and provided practical examples of how to achieve the goal, including the distribution of a 30-day booklet to help students get started and develop the habit of daily Bible study and prayer.

At the conclusion of his TED Talk, Watts asked the students, “How will you make it matter in 2015?”

Almost $6,000 praised for Water for India

Students raised nearly $6,000 as part of the conference’s Water for India Walk in cooperation with the One Life Project, sponsored by the Southern Baptist Convention International Mission Board to help provide clean water for one of the world’s most populous nations.

Travis Ryan, a musician from Nashville, led worship for the sixth consecutive Ignition. Other featured musical groups were Royal Tailor and Soulfire Revolution.

The 2016 Ignition is set for Dec. 28-30 at the Sacramento Convention Center