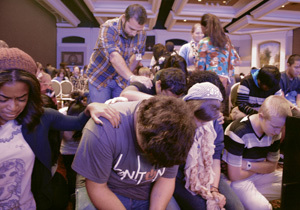 Ignition takes off in Southern and Northern California

FRESNO – About 1,600 junior high and high school students and their leaders were challenged to define, defend and deepen their faith at two Ignition Student Conferences, Dec. 27-29 in San Diego and Santa Clara.This was the first year the annual student conference, sponsored by California Southern Baptist Convention, under the new moniker of Ignition, was held in two locations (the event previously was called Tsunami).

Daryl Watts, CSBC student and family specialist and leader of the team that orchestrates the event, said the lagging economy was the primary impetus for the new format of a two-day – instead of three-day – event in two locations.

The switch, according to Watts, was planned “to keep costs down” so participants wouldn’t have to spend two nights in a hotel and pay for meals because of an additional day.

“With the two-day schedule, we didn’t think it fair for groups to travel across the state for a shortened event.”

Watts added the planning team hoped to attract churches that might not attend the traditional three-day schedule in another part of the state.

In spite of the conference’s shortened length, Watts said Ignition included the addition of “community groups” for participants to interact with other groups from the same geographic area. “For many churches SYC (state youth conference) is a great ‘shot in the arm’ for youth ministries which propel them into the future. However, for many groups the event does not provide a great deal of sustainability for the ministry.”

Watts noted the community group idea was to help connect youth groups in geographical areas to forge connections and cooperation.

“We are finding that most Southern Baptist youth groups don’t normally get together. Most churches have little contact with other churches in their area. So by putting these groups together, we are hoping to facilitate longer-lasting connections among students,” Watts explained.

He said at least three areas have reported connections between youth groups since the conferences concluded.

The same schedule would be repeated in 2013, Watts noted, because “we believe it worked well and will work even better based on what was learned in 2012. Also, with Christmas falling on Wednesday, it would be difficult to plan a three-day event without going over to Sunday.”

“A core value of the student conference is that we not impact local church ministry. Since student ministry, for the most part, takes place in the local church, we don’t want to do anything to take away from the church’s ongoing ministry.”

Watts said he believes the Ignition events were “some of the smoothest running we’ve ever executed.”

He said evaluations were “in line” with previous years.

“We’ll make adjustments and improvements based on the evaluations in order to better serve our churches, youth ministers and leaders, and students,” Watts said.

“This was the first time we had been in several years,” Shifter said. “It was an added bonus that the event was in San Diego, but that would not have necessarily stopped us from attending.”

He noted the conference is a “time for workers and students to get to know each other, to have fun and form bonds that will only strengthen the group in the long run.”

Shifter added, “The kids loved it, they had a great time because the conference featured great music and great messages.”

“Many of our testimonies are ‘jacked’ to the point that even our friends don’t know if we are Christians or not because of the way we act and talk,” Lopez told the students. “In reality, we should be changing other people’s lives by our actions.”

He exhorted the audiences that there be “no more compromise” so the students “would have clean testimonies for the Lord.”

Lopez also said it is important in today’s world to “hold on to the Word of God. You need scriptures in you.”

“How can you have victory in Christ if we don’t read and know the Word of God?” he asked.

Noting that by age 12 many children of other faiths can quote huge portions of their religious texts, Lopez said, “Today’s Christian can’t get past John 3:16.”

He added many professing Christian students today probably know more lyrics to songs by Lady Gaga, Justin Bieber and Katy Perry than know “who the 12 disciples are or what scriptures to use to lead someone to Jesus.”

Jeff Wallace – take the walk God has for you to go deeper… take the faith journey…and trust God no matter what happens
Jeff Wallace, youth pastor from Peace Baptist Church in Atlanta, also challenged the youth and their leaders to be mature Christians.

“Youth ministry,” according to Wallace, is the “health, depth and longevity of every church. Every church depends on the strength of its youth ministry and the students to become fully devoted followers of Christ.

“If not, the church as we know it will be extinct.”

Wallace exhorted those attending, “The Christian climate and culture of Christianity is in your hands today,” adding that the youth of today must “define their faith by believing what is true and giving your life to what you believe.”

He said it is “time for you to ignite the fire within you and take the walk God has for you to go deeper… take the faith journey…and trust God no matter what happens.”

But Wallace added that it isn’t enough just to define one’s faith.

“We must be able to defend our faith because we know where we stand. In reality, we are too many times motivated by people or situations instead of the passion God has placed in our hearts.”

Wallace said it is through “defining and defending our faith that we learn to deepen our faith by developing deep roots…that are weighted and grounded in Jesus, Who will always hold us upright.”

During the two events, 72 made professions of faith in Christ and 106 rededicated their faith.

Through offerings taken at both locations, some $3,600 was given for use in summer missions ministry.

Breakout sessions were provided for students, parents and leaders, as well as ministry projects for student groups.

Next year’s conferences will be held on Friday and Saturday, Dec. 27-28, again in San Diego and Santa Clara.